Can I test for lead with household chemicals?

I picked up a metal fence loop cap today and took it home just because I liked the shape. 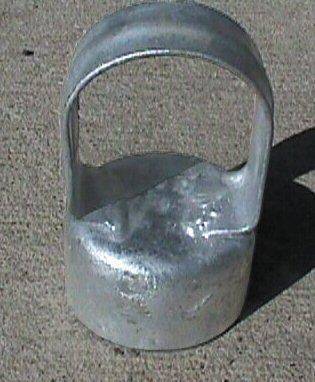 (^ not mine) I cleaned it, but some of the paint is chipping off. I'm only vaguely thinking about lead, and I'm not going to chew on it, so I don't want to buy a test kit. Is there a way I could test for the presence of lead ions with common/ideally household chemicals? I'd be willing to wait until I'm at my school lab again if I needed HCl or something.

General remark: get a bit of lead (metal or salt - whatever you look for) to have a positive control for your experiments.

If it is about the paint:

If you’re testing for whether it’s entirely made of lead, you can do it with a simple density calculation rather than anything chemical – an easy typical way to do this is to immerse it in a known volume of water and see how much volume the object adds, then divide the weight by that. Lead is the one of the heaviest common metals, with a density of just over 11 g/cm³.

If on the other hand it’s just lead content you’re looking for, I think you can go for, coincidentally enough, HCl.

NB: I have not tested the following procedure(s).

Lead (II) chloride isn’t very soluble (0.9 g/100 ml at 20 degrees Celsius), so if you just add a small quantity of strong HCl to a small sample of the metal and wait a while (leave it overnight or longer if you can, the reaction’s supposedly quite slow with lead: cf this video of trying it quickly and nothing happening, even with strong acid and strong peroxide. You might get a white precipitate of lead chloride forming.

If nothing happens, try adding a little potassium iodide. Lead (II) iodide is over ten times less soluble than the chloride, so you might get a precipitate with that if you don’t with the chloride. Note that adding hydrogen peroxide in the initial step will speed up the reaction of the acid with the metal, but hydrogen peroxide will also decompose dangerously rapidly if you then add iodide later (see the ‘elephant toothpaste’ demonstration, for example). Getting boiling acid everywhere is not something I recommend.

You can also then do a flame test – adding methanol to a lead salt and igniting should give you a somewhat ambiguous blue-ish flame.

Not the answer you're looking for? Browse other questions tagged ions analytical-chemistry or ask your own question.

5
Polarimetry test for cholesterol?
2
Accelerated stability testing for chemicals: Shelf life / Expiry Date
10
Can phenol be detected with a ceric ammonium nitrate test?
2
Test for unsaturation
2
Flame test for copper salts
6
Tollen's Test with Salicylaldehyde
1
How does one test for lead in dry paint?