Why does the nucleophile attack the most substituted carbon after the formation of a cyclic intermediate (three membered ring) in the cases of halogenation and oxymercuration of alkenes, as if there were a real positive charge. Shouldn't the most electrophilic carbon be attacked by the nucleophile?

Just to clear your doubts these are electrophilic addition reactions

The reaction is initiated by electrophilic addition of $\ce{Hg^2+}$(mercuric) ion to the alkene to give an intermediate mercurinium ion, whose structure resembles that of a bromonium ion. Nucleophilic addition of water as in halohydrin formation, followed by loss of a proton, then yields a stable organomercury product. The final step, demercuration of the organomercury compound by reaction with sodium borohydride, is complex and involves radicals.

When the π electrons of the alkene attack the mercury cation, a three-membered intermediate forms in which both carbons share a single bond with the mercury and a partial positive charge. It turns out that rearrangements are unlikely to occur from this intermediate (as opposed to the discreet carbocation intermediate in the acidic hydration reaction).

A water molecule then attacks the more substituted carbon, which bears a greater share of the positive charge. Cleavage of the carbon-Hg bond is accomplished with a reducing agent called sodium borohydride $\ce{NaBH4}$.

So where is the carbocation present?

The regioselectivity on this reaction is partly based on inductive effects resulting from the shifting of electrons in a s bond in response to the electronegativity of nearby atoms. I believe the other reason is based on hydride shift which converts the carbonation into a tertiary one and this is thermodynamically favourable. (Not entirely sure on second reason though)

Halogenation of Alkenes: Addition of $\ce{Br2}$

that the reaction intermediate is not a carbocation but is instead a bromonium ion, $\ce{R2Br+}$, formed by electrophilic addition of $\ce{Br+}$ to the alkene.

The bromonium ion is formed in a single step by interaction of the alkene with $\ce{Br2}$ and simultaneous loss of $\ce{Br-}$.

I have updated to include an even more detailed mechanism: 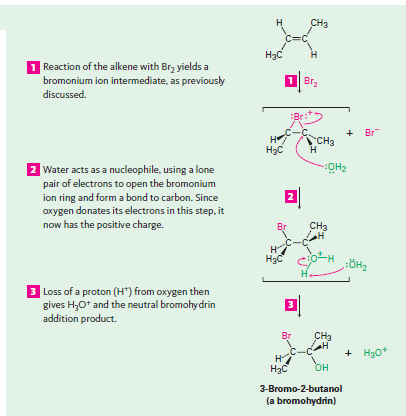 5
Bromination of alkenes
0
Electric Attraction Vs Resonance Energy in Electrophilic Aromatic Substitution Reaction
2
sn2 mechanism help please?
9
Why does water attack the more substituted carbon in oxymercuration?
5
Regioselectivity of bromination of alkenes
4
Finding major product when bromonium compound is acted upon by a nucleophile
2
Attack on cyclic intermediate during NGP
4
What is proximity effect?