Question regarding the mechanism of oxymercuration-demercuration of alkenes 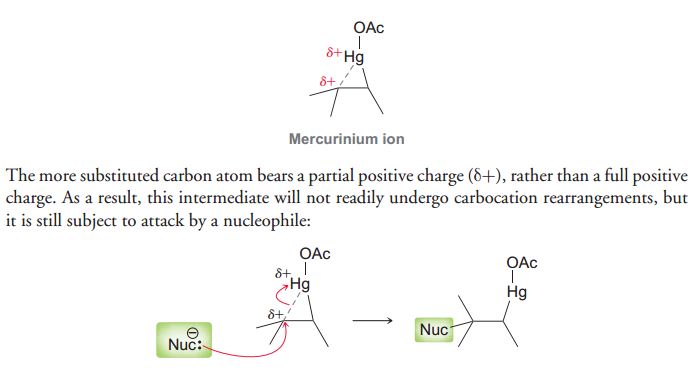 The text in between says that the more substituted carbon bears a partial positive charge. Why not the other one? I am asking this considering inductive effect, although I am myself not too convinced by my inductive effect explanation.

This reaction, in my opinion is an extension of Markovnikov’s rule

To understand why Markovnikov’s rule works, consider the structure and stability of carbocations and about the general nature of reactions and transition states.

A great deal of experimental evidence has shown that carbocations are planar. The trivalent carbon is sp2-hybridized, and the three substituents are oriented toward the corners of an equilateral triangle.

Because there are only six valence electrons on carbon and all six are used in the three s bonds, the p orbital extending above and below the plane is unoccupied.

The second point to explore involves carbocation stability. Thermodynamic measurements show that, indeed, the stability of carbocations increases with increasing substitution so that the stability order is tertiary > secondary > primary >methyl. 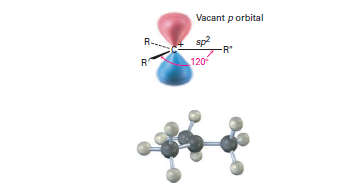 There are at least two reasons.

Inductive effects, result from the shifting of electrons in a s bond in response to the electronegativity of nearby atoms. (electrons from a relatively larger and more polarizable alkyl group can shift toward a neighboring positive charge more easily than the electron from a hydrogen

. Thus, the more alkyl groups there are attached to the positively charged carbon, the more electron density shifts toward the charge and the more inductive stabilization of the cation occurs)

31
Acidity of substituted phenols
10
Oxymercuration and demercuration mechanism
1
Why does hydroxide attack the carbon atom of methyl iodide (in an Sn2 reaction)?
0
Negative charged intermediate in acidic conditions - what's the problem?
3
Looking for a mechanism for the demercuration of organomercurial alcohol
1
Carbocation formation in electrophilic addition of hydrogen halides to alkenes
4
Comparing acidic strength in oxan-2-one and oxan-4-one
5
Regioselectivity of bromination of alkenes
2
Electronic effects of substituents in the benzyne mechanism