Why is the plateau on a heating curve in equilibrium? 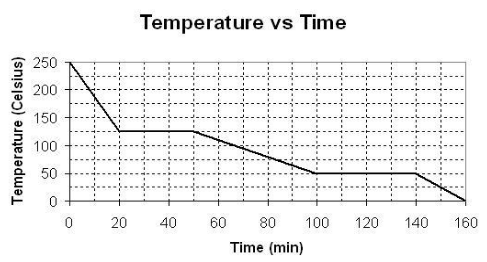 From the interval of 100 to 140 minutes, why is the substance in equilibrium?

I believe it's because at this interval, freezing and melting begin to occur at the same rate and, when two opposing reactions occur at the same rate, equilibrium is present. However, since the potential energy is decreasing (since the substance is freezing), the equilibrium favors the exothermic reaction causing the substance to eventually become solid in the interval of 140 to 160 minutes.

You are right about the equilibrium existing because both freezing and melting occur at the same rate.
Imagine ice and water kept in a thermos flask under normal atmospheric pressure. You will observe that there is no change in the mass of both the phases.
But there is actually a lot of activity going on. Some molecules of ice enter the liquid phase and some molecules of water enter the ice phase. As both these processes occur at the same rate you don't see any change in the mass of both the phases.
In fact such equilibriums exist for all pairs of solids in their own liquids and gases above their own liquids at particular temperatures.
In your case I think there is a mechanism to extract heat from the system which shifts the equilibrium towards liquid changing to solid ie freezing.

The flat regions are where the solid is changing into liquid and liquid into gas at the higher temperature. These regions persist whenever there are still two phases in equilibrium. The heat necessary to cause the melting used to be called the Latent Heat of Fusion but nowadays is called the enthalpy of fusion (or melting) and similarly for vaporisation.

The solid is held together by a cohesive or lattice energy, generally called intermolecular energy (potential energy with attractive and repulsive parts) which has to be overcome for the solid to melt, and the heat absorbed by the solid is used to do this which means that the temperature does not rise until all the solid has melted. A liquid also has intermolecular forces but weaker than in the solid and thus has increased entropy. This increase in entropy has the effect of lowering the Gibbs free energy.