What is happening in this video of solvated electrons donated from sodium in ammonia?

I just saw the Periodic Video Liquid Electrons - Periodic Table of Videos where sodium is added to liquid ammonia. The demonstration shows that even if electrons are solvated, if you have a high enough electron density, the substance will turn shiny and reflective and metallic. Sodium is dissolved in liquid ammonia and donates the electrons to the solution.

There are a number of things happening in the demonstration that I don't understand.

Also, at concentrations below the metallic appearance, the sodium in ammonia solution starts out very strongly blue colored. Why? What is it about adding sodium to liquid ammonia that instantly produces such a deep blue, almost black color?

It seems that the demonstration did not go quite as planned, so isopropyl alcohol was added, producing sodium isopropoxide. Why? 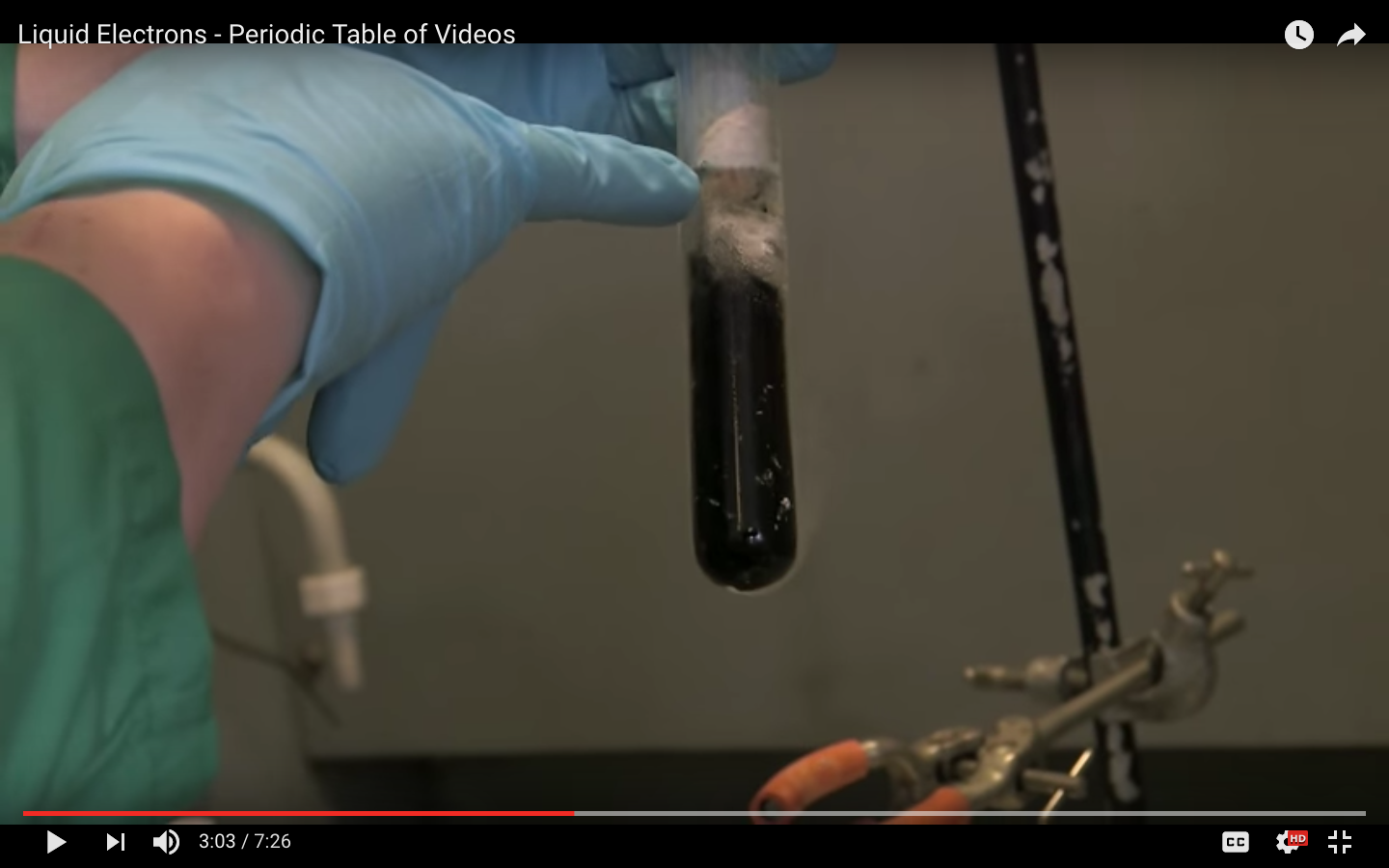 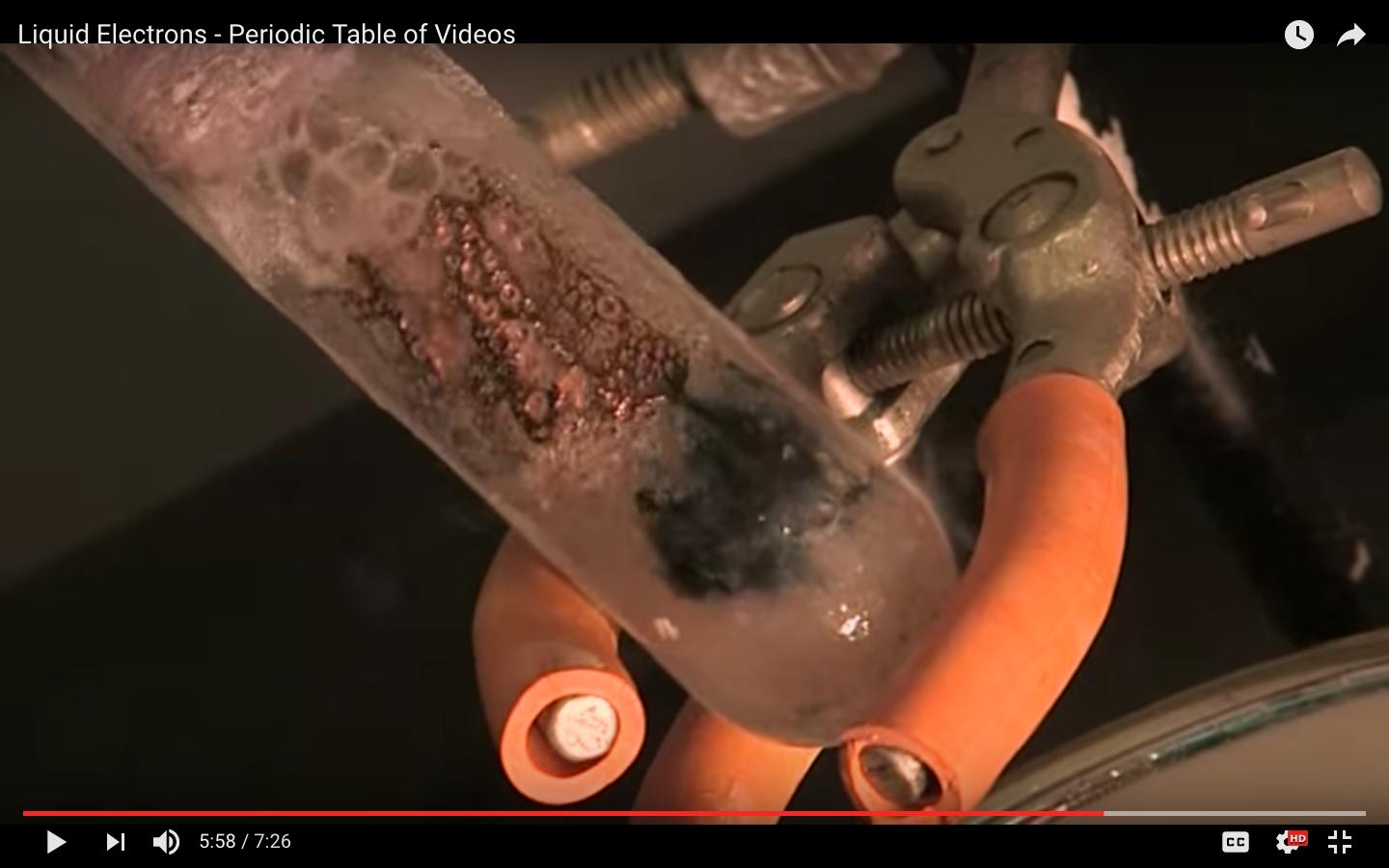 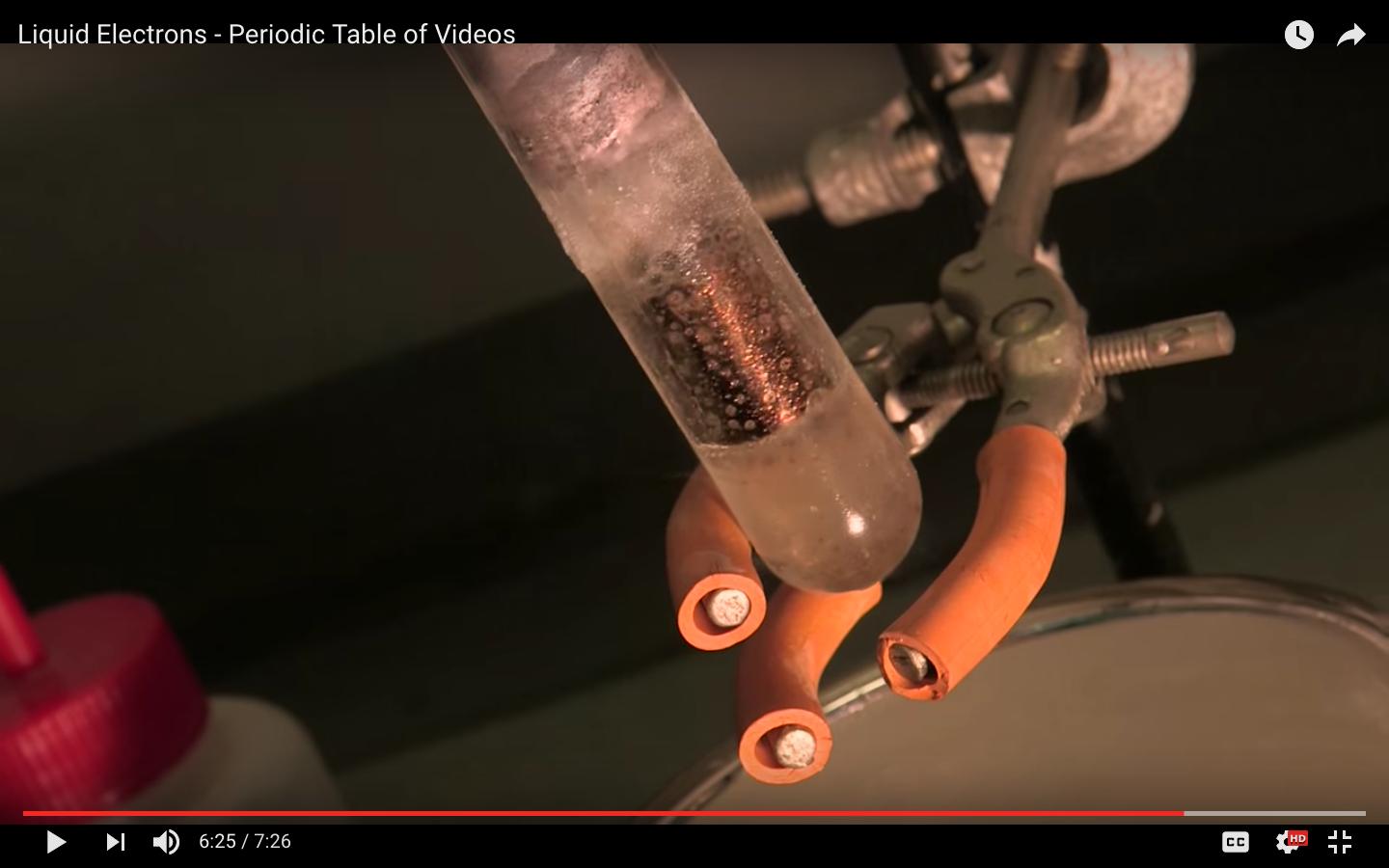 I'll try an answer to this question because I watched this video a while back and did a bit of reading on it at the time and I think I understand the big picture. The problem is that these solvated electrons are very complicated things, and do not lend themselves to the traditional ways that chemists would like to think about things. For that reason, there is quite a lot of literature coming from physicists which is very complicated but nonetheless valuable. Additionally, solvated electrons show up in more than just this rather unusual metal-liquid ammonia solution. For instance, a recent paper in Nature chemistry by Sieferman et. al. [1] showed that there are transient solvated electrons at the surface of water which can have major implications for natural electron transfer reactions. So, understanding these systems is truly quite important.

In order to get at the deep blue color which is seen in this sodium-ammonia solution, we must understand what it is that is absorbing (reddish) visible light and hence leading to the transmission of a lot of blue light.

Obviously one question that would be nice to answer is why is it such a deep blue solution? Well, this sort of question is always hard to address because the color of things is more or less an accident. The fact that it is blue just tells you that the electron is relatively weakly bound because it is excited by reddish light.

For more details on the bound-continuum transition, see Aulich's paper [2] which uses photo-electron emission to study solvated electrons as a function of concentration and photon energy. For a theoretical treatment of the bound states at dilute concentrations of metals, see Jortner's paper [3].

The Transition to a Bronze Color:

One reason that people have been very interested in this system is because of this transition that takes place as the concentration of metal increases. Let me first try to give some intuition as to why this transition takes place at all. First, going off of our model that the electrons polarize the solvent and exist in a low-energy, bound state, we should expect that as more electrons are added to the solution (i.e. as more sodium is added), these cavities which the electrons occupy will become closer and closer to each other. This means that electron-electron interactions become quite important. This means two things: first, we have to begin worrying about satisfying Pauli exclusion, and second, we have to be concerned that at some point the electrostatic repulsions will become larger than the binding energy of this electron.

These two points have been studied by some physicists. Alavi and Frenkel's paper [4] develops a model and then performs simulations on ideal fermions (I honestly don't know what makes a fermion ideal and don't understand this paper), demonstrates that the low-concentration bound states are very unstable as the concentration of electrons increases. Thus, some transition must take place.

The best paper on the theory of this transition can be found here [5]. The reason this transition is so interesting is that it is a "metal to non-metal" transition. Remember when you were first introduced to metals and the characteristic description is that they are a "sea of electrons"? That is, the electrons are free to move around, and this leads to high conductivity and other observable properties, one of which is that they absorb and reflect nearly all wavelengths of light, which leads to the silvery color of most metals.

Well, the exact same phenomenon is being observed here, but it's very peculiar because this is all happening in a liquid. For instance, Schroeder et. al. wrote a paper [6] which measures the conductivity of several metal-ammonia solutions as a function of concentration of the metal. I unfortunately couldn't add the relevant figure, but the conductivity basically increases linearly with concentration of the metal until it hits a plateau and does not increase any further.

This gradual increase explains what is going on when we see a separation into two phases. The explanation goes like this. There is only so much space which allows for the existence of the bound states we described above because these bound states occupy a cavity of relatively large volume in the solvent. As more metal is added, more electrons are free in the solution, but the solution is already saturated with these bound electrons. Thus, the electrostatic and exclusion effects become such that any additional electrons added can only exist in a metallic state. This is peculiar because this metallic state is in the liquid phase and is actually fairly dense (I read this somewhere but can't remember the reference... Will update later). If one continues adding electrons, they always become incorporated into the metallic state because the bound states are saturated. Eventually, enough electrons are present that the destabilizing effects due the presence of other electrons is large enough that no possible bound state can exist and the whole system becomes metallic. Hence the plateau in the conductivity plot I described above. At this point, I believe the sodium ceases to dissolve and just stays as plain old metal sodium.

I do not have a good explanation for why the metallic phase is specifically bronze colored as opposed to silvery. I suspect this is a very subtle feature and would certainly be temperature dependent. I haven't described the temperature dependence of all of this, but there quite a few papers that address only this point and it seems to be quite complicated.

I also don't know why the metallic phase forms on the top. I suspect this may just be an artefact of the experiment in that video. That is, it is entirely feasible that solid would sink to the bottom if it didn't just freeze to the side of the test tube. I could be wrong about that though.

21
How to think of solvated electrons?
4
Solvated Electrons
2
How to interpret the shape in this representation of an electride?

1
Where do the electrons not in the S1 orbital get this "extra energy" from?
17
What is the reason for the blue color of an ammoniated electron?
19
Is it possible create crystalline solvate of electrons?
21
Why are lithides not known?
21
How to think of solvated electrons?