Why is anhydrous copper(II) sulfate white while the pentahydrate is blue, even though both have one unpaired electron?

We all know that $\ce{CuSO4.5H2O}$ is blue and it turns to $\ce{CuSO4}$ on heating which is white. I also learnt about coordination complexes and d–d transitions and how transition metal compounds are colored. Recently I came to know that $\ce{CuSO4.5H2O}$ is also a coordination compound and in its structure four water molecules are coordinated with $\ce{Cu^2+}$ and one is hydrogen-bonded to $\ce{SO4^2-}.$ So, I thought lets try to apply the theory here and see what causes the blue color of copper sulfate.

Although the question is a bit old, I think it still hasn't been answered yet. And by looking at the given answers it seems like the discussion went into a different direction at some point. 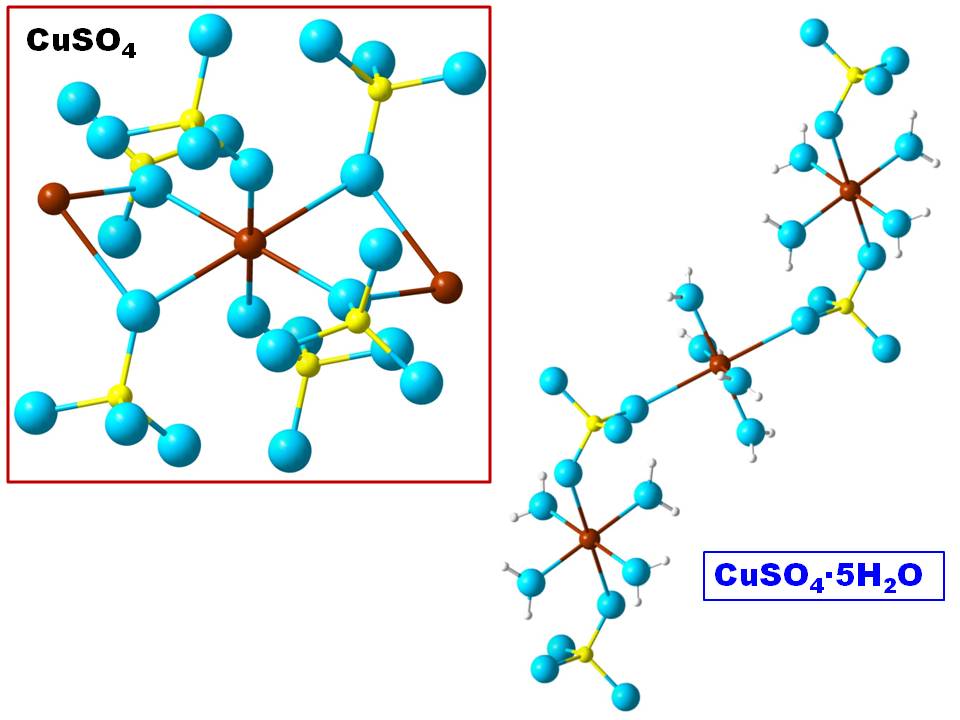 Those two are similar in their ligand field splitting, where the latter one is slightly weaker, so we expect a red-shift of the absorption energy. And that is also what Nagase et al. investigated on (Ref.1):

As shown partly in Fig. 1, the $\mathrm{d–d}$ band maxima of the hydrated and anhydrous copper sulfates were observed at $\pu{13200 cm-1}$ ($\ce{CuSO4.5H2O}$), [...] and $\pu{12500 cm-1}$ ($\ce{CuSO4}$), respectively, in their reflectance spectra. This is in agreement with the expectation from the spectrochemical series, and indicates that, in a series of complexes of comparable tetragonalities, the substitution of a coordinated water molecule with a sulfate oxygen weakens the apparent ligand field strenght about $\pu{150-200 cm-1}$. In addition to this shift of the absorption maxima, the following spectral changes were observed on dehydration: (i) the width of the $\mathrm{d–d}$ band becomes gradually narrower with the advance of dehydration; (ii) a broad and very weak absorption appears near $\ce{20000 cm^{-1}}$ in the spectrum of $\ce{CuSO4.H2O}$, and, with somewhat increased intensity, in that of $\ce{CuSO4}$; and (iii) a strong absorption (probably charge-transfer band) appears in the ultraviolet, and shifts remarkably to the lower frequency side with the advance of dehydration, indicating that the $\ce{[SO4]^2-}$ ions are getting more and more strongly bonded, as more and more sulfate oxygens are getting coordinated in the $x-y$ plane of the complex and shared among many $\ce{Cu^2+}$ ions. [...] Both the slight red-shift and the narrowing of the $\mathrm{d–d}$ band contribute to the disappearance of the blue color [...]

Therefore, the disappearance of the blue color of $\ce{CuSO4.5H2O}$ caused by dehydration is only an apparent phenomenon, which is brought about by a relatively small shift of the $\mathrm{d–d}$ band to the red end of the visible spectrum (and partially into the near infrared) and perhaps also by the spontaneous pulverization of the dehydrated product; if we had eyes which could register radiation from near IR to near UV, we should certainly feel that $\ce{CuSO4}$ is much more darkly colored than $\ce{CuSO4.5H2O}$!

Since the ligand field strengths of $\ce{H2O}$ and $\ce{[SO4]^2-}$ are seemingly only slightly different from each other, these changes will only bring about a small shift in the $\mathrm{d–d}$ band towards the red. On the other hand, the $\ce{[SO4]^2-}$ ions, which are weakly held in the axial positions of $\ce{CuSO4.5H2O}$, are gradually brought into the equatorial coordination sphere, so that their CT interaction with the $\ce{Cu^2+}$ ion will be strongly enhanced. The observed spectral changes thus come about. Somewhat similar spectral changes are also observed when the double sulfates $\ce{M2Cu[SO4]2.nH2O}$ (where $\ce{M = Na^+, K^+, Rb^+, Cs^+}$ and $\ce{[NH4]^+}$) are heated.

The $\mathrm{d^9}$ configuration is an unsymmetrical field, with the $\mathrm{t_{2g}}$ orbitals being completely filled while the $\mathrm{e_g}$ orbitals have only three electrons. So, according to the Jahn Teller theorem, these octahedral shapes will undergo slight distortions and will not be a perfect octahedron.

It is easy to see why it is so. Due to this unsymmetrical filling up of $\mathrm d$ electrons, some ligands will be repelled more as compared to other when they approach to form the complex. In this case, the $\mathrm{e_g}$ orbitals (which point directly at the approaching ligands) have two electrons in one while one electron in the second $\mathrm{e_g}$ orbital. So, the ligand along either $\mathrm d_{z^2}$ or $\mathrm d_{x^2-y^2}$ will be repelled more as compared to the other.

Hence it will experience some sort of elongation towards that side, and more importantly, to remove the asymmetry, further sub-splitting will occur in the $\mathrm{e_g}$ level, so even the restrictions of spin will be lifted. Clearly, the Laporte rule is no longer valid, and so, it can undergo $\mathrm{d–d}$ transitions. While in the anhydrous form, we can clearly see that a centre of symmetry will be present, and so transitions will be Laporte-forbidden. 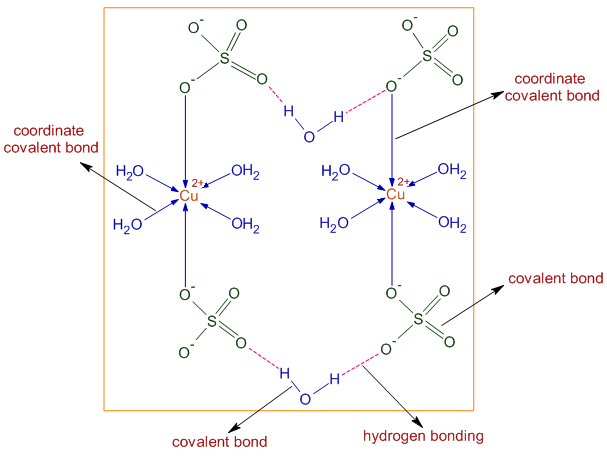 The blue color which arises when we dissolve $\ce{CuSO4}$ is indeed due to d–d transition. The reason behind this is the splitting effect.

The $\ce{Cu^2+}$ ion is hydrated by four $\ce{H2O}$ molecules, i.e it forms a $\ce{[Cu(H2O)4]^2+}$ complex. Due to the water molecules, the d-orbitals which were degenerate (of same energy) prior to the hydration, are split up into two discrete groups having different energy levels (they are called $\mathrm{t_{2g}}$ and $\mathrm{e_g}$ groups). The energy difference (i.e the energy of photon which will be released due to the transition) between the groups is corresponding to the blue color seen.

Refer to crystal field theory (CFT) if you are willing to know more.

Not the answer you're looking for? Browse other questions tagged inorganic-chemistry coordination-compounds transition-metals color crystal-field-theory or ask your own question.

3
Struvite crystals: how do they form?

0
Absorbtion of light by a coordination compound
7
Color of Anhydrous Transition Metal Salt
21
Why is manganese(II) coloured although the transition should be spin-forbidden?
4
Why is ruthenium(III) intensely colored in water
2
Confusion in hybridisation of coordination compound
5
Vibronic coupling: How do I determine the new point group after vibration?
3
Sulfate and carbonate ions as ligands
0
Which ligand names have to be parenthesized while naming the Mononuclear Coordination entities