Is there such a thing as an acid without a hydrogen?

I'm in AP Chemistry and we are learning about the Brønsted-Lowry model and my teacher mentioned that "for the most part" acids have hydrogen, could there be such a thing as an acid that has no hydrogen in it?

It depends on which definition of acids and bases you are using.

According to the Arrhenius theory, acids are defined as a compound or element that releases hydrogen (H+) ions into the solution. Therefore, there are no Arrhenius acids without a hydrogen atom.

The fluorine ion here is a Lewis base as it donates a pair of electrons.

If you want to get more rigorous about the definition of Lewis acids: "a Lewis acid is a type of chemical that reacts with a Lewis base to form a Lewis adduct".

There are quite a number of theories regarding acidity and basicity, but in this case, will explain the Lewis acid.

The Lewis Theory of acids and bases

This theory extends well beyond the things you normally think of as acids and bases.

The Lewis acid-base theory explains why $\ce{BF3}$ reacts with ammonia. $\ce{BF3}$ is a trigonal planar molecule because electrons can be found in only three places in the valence shell of the boron atom.

$\ce{BF3}$, therefore, reacts with Lewis bases such as $\ce{NH3}$ to form acid-base complexes in which all of the atoms have a filled shell of valence electrons, as shown in the figure below:

Water is an example of a lewis base. Carbocations are examples of lewis acids. When water reacts with a carbocation, as shown above, one of the electrons pairs from oxygen is used to form a new sigma bond to the central carbon in the carbocation.

As noted by others, there is the concept of Lewis acids, and other answers to this question explain that concept well. To reiterate: A Lewis acid is a chemical that will accept electron pair donation from another chemical (which is called a Lewis base in this context). It is also true that Brønsted-Lowry defined acids as $\ce{H+}$-donors and bases as $\ce{H+}$-acceptors. As such, a BL acid without hydrogen is strictly not existent.

I note two important exceptions that sort of defy the strict definition. Boric acid $\ce{B(OH)3}$ does not detach one of its original protons but accepts an electron pair from $\ce{OH-}$. This raises the concentration of $\ce{H+}$ through protolysis of water. $\ce{FeCl3}$ reacts likewise. Of course, these reactions require water, thus, in the strict sense, a complex of water and the substances noted constitutes the BL acid, not the substances themselves.

Consider that Science is full of 'levels' of abstraction. We have positive integers (the natural numbers), but then we add zero, then negative integers, then rationals, finally we might think we're done when we get to real numbers, but then along come complex numbers, and quaternions, octonions, vectors, fields, and on and on.

While historically a fact, so you need to be familiar with the concept of Lewis Acid/Lewis Base/Lewis Adduct, you should also be aware that all chemistry has to do with the (partial or total) donation and accepting of electronic charge, so while lone pair chemistry is a large enough area to justify its own terminology, it's just the same old, same old "chemistry is about the electrostatic interactions of atoms" story.

Plenty of answers here focused on the definitions of Brønsted-Lowry and Lewis acids, which is great. But there is an important point I saw mentioned only in passing (in TAR86's answer), and I think it comes closer to answering your question that reciting the somewhat arbitrary acid-base definitions of our forefathers (useful as they are).

Could there be such a thing as a Brønsted-Lowry acid that has no hydrogen in it?

Yes! At least in a pragmatic sense. As elaborated here, highly-charged metal cations such as $\ce{Al^{3+}}$ and $\ce{Fe^{3+}}$ can liberate protons in aqueous media. When such cations are placed in water, water molecules coordinate/associate with the metal ion:

Here is a structural cartoon of the hexavalent aluminum hydrated complex: 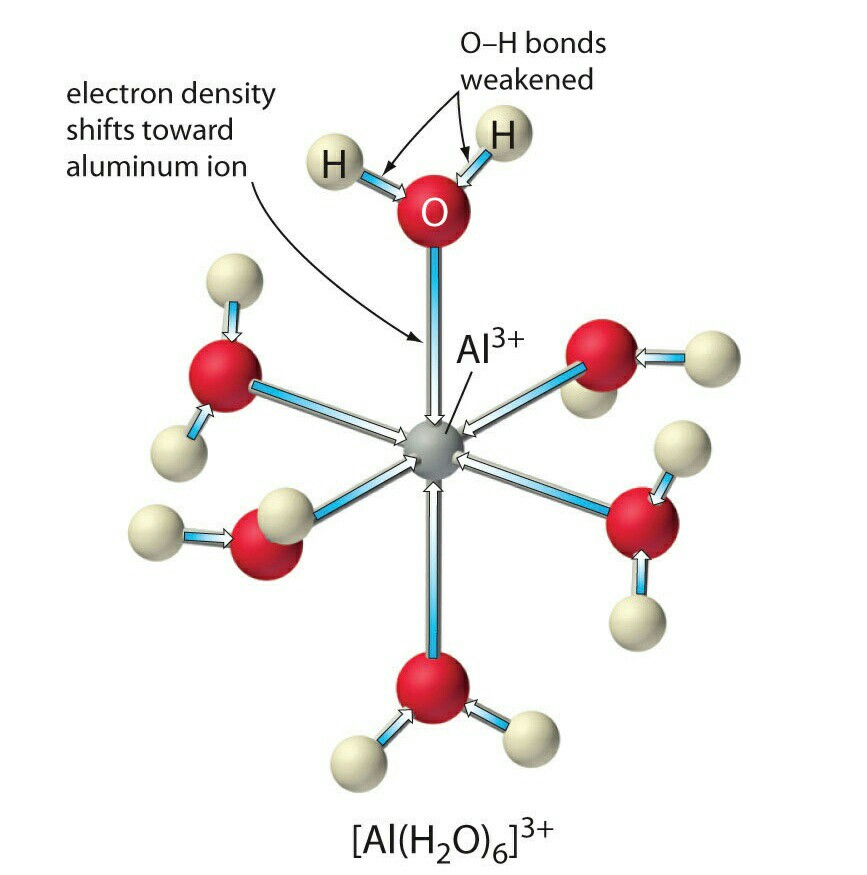 I'm not sure if your teacher had this in mind, or was just trying to cover their arsenic in case there were exceptions they had forgotten about, but there is your answer.

Not the answer you're looking for? Browse other questions tagged acid-base hydrogen or ask your own question.

14
How can aluminium oxide be called an acid?

14
How can aluminium oxide be called an acid?
7
Are there any amphoteric substances other than water and ammonia?
0
Esterification and dehydration synthesis
19
Is the proton the strongest acid?
3
How can Arrhenius bases also be Brønsted-Lowry bases?