If α-glucose is less stable than β-glucose, why is glucose almost always α in its compounds?

Maltose, saccharose, turanose, trehalose, trehalulose, amylopectin, amylose - they are all α. Why? Also, why is cellulose β?

I think it has to do with configurations and conformations of sugars and biological needs.

A sugar with a six-membered ring is known as a pyranose, the simplest compound containing such a ring. Similarly, sugars with five-membered rings are designated furanoses.

The cyclization of a monosaccharide renders the former carbonyl carbon asymmetric. The resulting pair of diastereomers are known as anomers. In the α anomer, the OH substituent to the anomeric carbon is on the opposite side of the sugar ring from the CH2OH group at the chiral center that designates the D or L configuration (C5 in hexoses).

The other anomer is known as the β form. Sugars accurately described as cyclic polyhydroxy hemiacetals or hemiketals, because the linear form exists in very minute quantities (although β forms comprises larger percentages in mutarotation mixtures and under physiological conditions)

Hexoses and pentoses may each assume pyranose or furanose forms. The equilibrium composition of a particular monosaccharide depends somewhat on conditions but mostly on the identity of the monosaccharide.

The pyranose ring, like the cyclohexane ring, may assume a boat or a chair conformation. 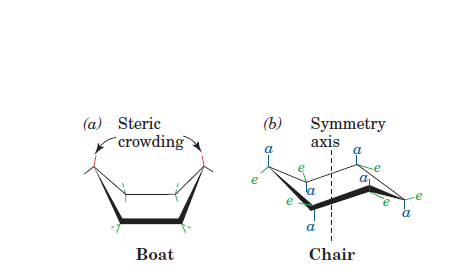 The relative stabilities of these various conformations depend on the stereochemical interactions between the substituents on the ring. The boat conformer crowds the substituents on its “bow” and “stern” and eclipses those along its sides, so that in cyclohexane it is ~25 kJ /mol less stable than the chair conformer. The ring substituents on the chair conformer fall into two geometrical classes: the rather close-fitting axial groups that extend parallel to the ring’s threefold rotational axis and the staggered, and therefore minimally encumbered, equatorial groups.

Since the axial and equatorial groups on a cyclohexane ring are conformationally interconvertible, a given ring has two alternative chair forms; the one that predominates usually has the lesser crowding among its axial substituents.

The conformational situation of a group directly affects its chemical reactivity. For example, equatorial OH groups on pyranoses esterify more readily than do axial OH groups. Note that β -D-glucose is the only D-aldohexose that can simultaneously have all five non-H substituents in the equatorial position. Perhaps this is why glucose is the most abundant naturally occurring monosaccharide.

Glycogen and starch ingested in the diet are hydrolysed by α -amylases and glycosidases, enzymes in saliva and the intestine that break (α1n4) glycosidic bonds between glucose units. Most animals cannot utilise cellulose as a fuel source, because they lack an enzyme to hydrolyse the (β1n4) linkages.

The most stable three-dimensional structure for the (α 1n4)-linked chains of starch and glycogen is a tightly coiled helix, stabilized by interchain hydrogen. For cellulose, the most stable conformation is that in which each chair is turned 180° relative to its neighbours, yielding a straight, extended chain. (In contrast, the average plane of each residue along the amylose chain forms a 60° angle with the average plane of the preceding residue, so the helical structure has six residues per turn). All ⎯OH groups are available for hydrogen bonding with neighbouring chains. With several chains lying side by side, a stabilizing network of interchain and intrachain hydrogen bonds produces straight, stable supramolecular fibers of great tensile strength.

Polysaccharide molecules can be represented as a series of rigid pyranose rings connected by an oxygen atom bridging two carbon atoms (the glycosidic bond).

There is, in principle, free rotation about both C-O bonds linking the residues however, rotation about each bond is limited by steric hindrance by substituents. The three dimensional structures of these molecules can be described in terms of the dihedral angles, ϕ and Ψ, about the glycosidic bond: 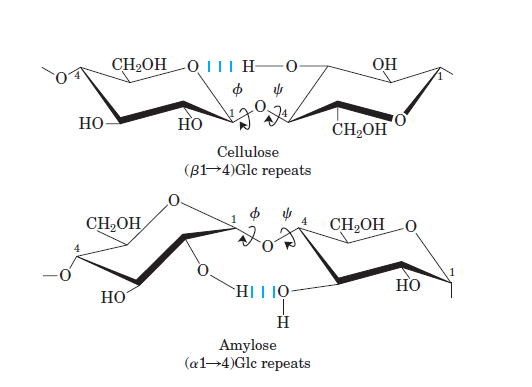 The bulkiness of the pyranose ring and its substituents, and electronic effects at the anomeric carbon, place constraints on the angles ϕ and Ψ; thus certain conformations are much more stable than others.

Summarising this, the abundance of the forms of sugars has a lot do with factors affecting conformations such as boat and chair – actually this the reason why , equatorial OH groups on pyranoses readily react compared to axial ones, (sterics, rotation about the C-O bond – this is limited in cellulose as it forms almost linear chains and a strong network of H bonds between adjacent molecules limiting flexibility), and other biological factors such as availability of enzymes to break glycosidic bonds connecting the molecules (as noted animals don’t have the ability to break (β1,4) glycosidic bonds).

An enzyme can use any conformer of monomer it wants as a building block for polymer formation, so there is no violation of a chemical law there. But from a physiological point of view, why build starch and glycogen with alpha linkages? The reason is that the polymer forms an open structure, which enzymes such as amylase or phosphorylase can easily attack. This is exactly the kind of structure you want for a fuel storage polymer. Also, glycogen and starch granules are more or less water soluble and not damaging to cells.

Formation of beta-linkages creates fibers which are damaging to cells, and if they bind to one another are hard to metabolize. Cellulose is the perfect example. Fibers are made for structural reasons, not fuel storage.

Not the answer you're looking for? Browse other questions tagged biochemistry carbohydrates conformers or ask your own question.

7
Which conformer of beta D-glucose is more stable?
6
What chemical properties make some grasses usable for producing textile fabrics?
1
Why are glycosidic bonds always 1->4 in polysaccharides?
4
Bonding between amylopectin and amylose
3
Gel filtration separation of cellulose, starch, oxytocin and palmitic acid
4
Why is maltose a reducing sugar but not sucrose, even though they're both disaccharides?
3
Hydrolysis of β-1,2 glycosidic bond
1
If concentration of K+ ions inside the cell is almost equal to concentration of Na+ ions outside of the cell why these ions cross the membrane?
2
Why can't amylase digest glycogen?