What makes enantiomers so special?

The reason (strict mirror image) enantiomers have more attention paid to them than diasteriomers (at least in Organic Chemistry classes) is because they share the same reactivity toward achiral reagents.

This has very real implications for practicing organic chemists. If you start with achiral starting material and produce a chiral compound, there is no way (with strictly achiral materials) to produce anything but a racemic mixture of two enantiomers. You can futz with conditions to get specific diasereomers, but not specific enantiomers. In order to get an "enantiomeric excess" of one, you either need to use chiral reactants or a chiral catalyst.

Likewise with separation. If all you have is an achiral chromatography column (e.g. silica) and simple (achiral) solvents, you're not going to be able to separate two enantiomers. They're always going to migrate the same. Again, futzing with conditions can get an achiral chromatography column to resolve diasteromers, but not enantiomers. To resolve enantiomers, you need a chiral column (or less likely, a chiral solvent).

Combined with the importance of particular stereoisomers in biological systems, that's why the emphasis on enantiomers in Organic Chemistry classes. Historically, it was a big sticking point in the development of organic synthesis to a) figure out that enantiomers were a thing, and b) work out how to deal with enantiomers. Even today there's tons of research into chiral control. However, modern practicing organic chemists tend to work on larger and more complex systems, with many stereocenters so the enantiomer/diasteromer divide isn't as important, as often they're working with stereocenters "in isolation".

Enantiomers have different physical arrangement of atoms. This difference plays a crucial role in biology.

But, why do enantiomers have different biological activities? 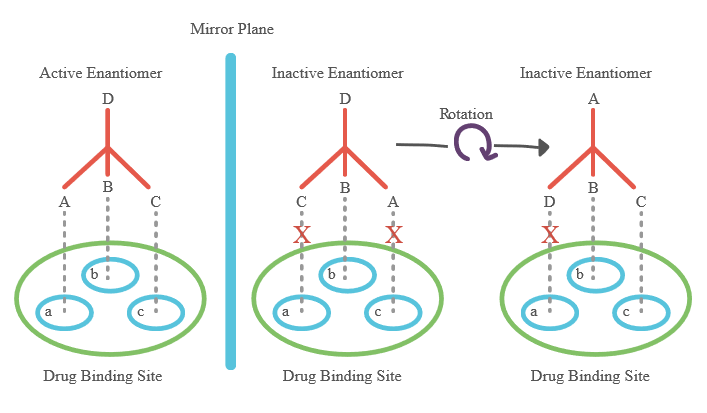 The main reason enantiomers are emphasized more comes down to the interesting properties they have, particularly in biological systems.

A pair of enantiomers exhibit identical physical properties (e.g. melting point, dipole moment, etc) except for their optical activity (as you said, they rotate plane-polarized light with the same magnitude, but in the opposite directions). Chemically, however, a pair of enantiomers can behave very differently. This is particularly seen in biological systems, which are often adapted to work properly with only a particular enantiomer of a pair. For example, almost all naturally occurring sugars are the D-enantiomer and almost all naturally occurring amino acids are the L-enantiomer.

This has major implications in medicine; often times only one of the enantiomers is effective and the other can be inert or even harmful. The comments on your question mention thalidomide, a drug that was sold as a sedative and a treatment for morning sickness until it was realized that while one of the enantiomers had the desired effect, the other caused birth defects. Making enantiopure mixtures is necessary to ensure you are truly generating the effect you want (in the case of thalidomide, this still fails because the compound naturally racemizes).

For diastereomers, there is a greater expectation that they would behave differently due to their different physical properties. Hence, a lack of emphasis on diastereomers (which I'm not certain there is a lack of emphasis, at least from the organic chem course I took) may be due to the fact that the relationship between diastereomers is less direct than that between enantiomers and so it is tougher to draw conclusions about what properties they will share.

21
What is the difference between D and L configuration, and + and −?

3
Is this analogy explaining the difference between enantiomers and diastereomers correct?
13
What makes carbon special and versatile?
9
Formation of peracetic acid from acetic acid and hydrogen peroxide and its stability in their presence
11
Maximum observed optical rotation through a polarimeter
13
Concise description of primary organic reaction types mechanisms
20
What is occuring on the quantum level when a molecule rotates plane polarized light?
1
What are the predominant acids in sphagnum peat moss?
2
Potassium carbonate vs. Potassium hydroxide in Wood Ash