When is a dipole-dipole interaction strongest?

Are there any conditions that'll improve the interaction? Just like, I assume, hydrogen bonds are strongest when the difference in electronegativity is biggest.

An electric dipole is formed in a molecule as the vectorial sum of all the partial charges on the atoms multiplied by their separation. Thus if, these charges are large and well separated and not symmetrically situated about the molecule the dipole will be large. For example chloro-benzene has a far larger dipole than toluene. However, 1,4-dichlorbenzene has zero dipole as the charges cancel out. (Molecular point groups can be used to decide if a molecule has a dipole, but not its magnitude. Only molecules in groups $C_1, C_s,C_n,C_{nv}, n>1$ have dipoles). Hydrogen bonds have no special significance with respect to dipoles.

Dipoles interact through space, and the strength of their interaction depends on the distance between the dipoles, relative orientation and relative permittivity (dielectric constant) of the intervening medium. Each of these have a dramatic effect for any given pair of dipoles.

The interaction energy E for dipole vector $\mu_1, \mu_2$ at separation R and where $\bar R$ is the vector joining the centres of the dipoles is

The figure shows the geometry. 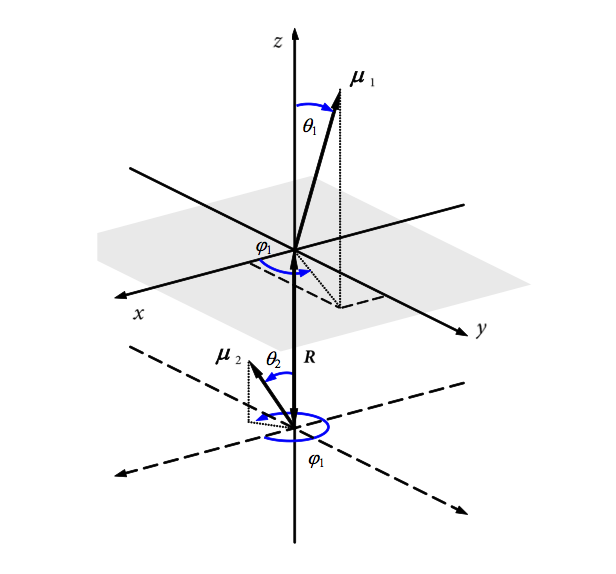 If the dot product $\bar \mu_1 \cdot \bar \mu_2 =0 $ and one of the two dot products with $\bar u_R $ are $0$ then the energy is zero, and this can occur when dipoles are at 90 degrees and one points to the centre of the other. Physically this makes sense as each end of a dipole sees equal positive and negative charges on the other dipole.

The hydrogen bond is often described as a strong electrostatic dipole-dipole interaction. However, it also has some features of covalent bonding.

13
Is an ionic bond more like a covalent bond or an intermolecular force?
23
Is Hydrogen Bonding a Type of Dipole Dipole Interaction?
2
H2Te dipole and electronegativities of H and Te (high school level chemistry)
16
Can nonpolar molecules exhibit dipole-dipole forces?
6
Is it possible to have a dispersion interaction with no inductive interactions?
0
Van der Waals interaction and magnetic dipole dipole interaction
1
Intermolecular interaction between aniline and dichloromethane
5
Does gas chromatography follow the "like interacts with like" rule of thumb?
4
Strength of the hydrophobic interaction