Why does one of Dalton's compound elements with oxygen and phosphor consists of four atoms instead of two?

I stumbled across a peculiar detail while reading the chapter about the Chemical Revolution in Bowler and Morus' book Making Modern Science. According to this book, Dalton argued that compound elements are created in the simplest possible way. For instance a compound consisting of equal number of X- and Y-atoms would then consist of one X-atom and one Y-atom. Still, in this illustration from Dalton's New System of Chemical Philosophy, oxygen with phosphor (compound 51) consists of two oxygen and two phosphor atoms. What is the reason for this? 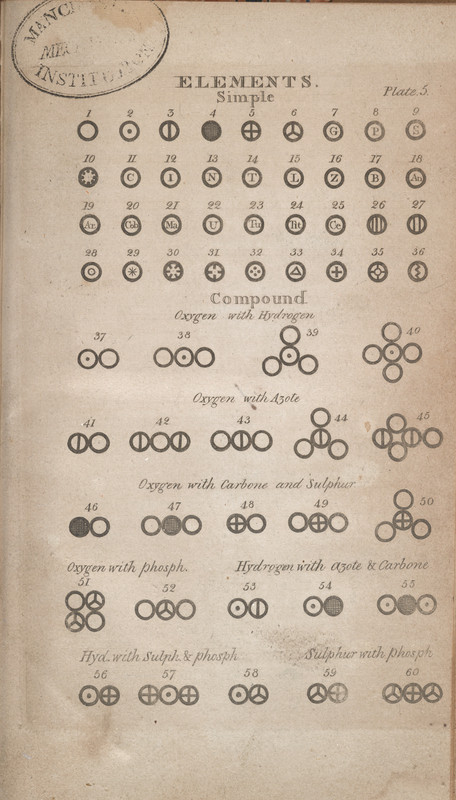 The plate is from Dalton's book A New System of Chemical Philosophy.

The explanation says that "51" is "phosphorous acid" with weight 32.

The discussion of phosphorous acid is mostly on pages 408-410.

Initially, he contradicts the plate saying "I am inclined to believe" that phosphorous acid is one O and one P with a weight of 7 + 9 = 16.

But then he says:

If this be the case, it may appear singular that none of the other elements exhibit acid properties when combined with 1 atom of oxygen ; but it should be observed, that the phosphoric oxide is in a liquid form, and disposed to separate into phosphorus and phosphoric acid, circumstances that do not combine in regard to the other oxides. In fact, phosphorous acid may be considered as phosphoric acid holding phosphorous in solution, rather than a distinct acid.

Not the answer you're looking for? Browse other questions tagged stoichiometry history-of-chemistry or ask your own question.

3
Is Dalton's Atomic Theory a theory or a postulate?