What causes the “Gd break” in the trend of lanthanide-EDTA formation constants?

Smith and Martell obtained a series of data for the binding of trivalent lanthanide ions, $\ce{Ln^3+}$, with various carboxylic acid ligands (amongst them the well-known EDTA).1 A graph of the formation constants is attached ($K_\mathrm{f} = [\ce{Ln(edta)-}]/[\ce{Ln^3+}][\ce{edta^4-}]$): 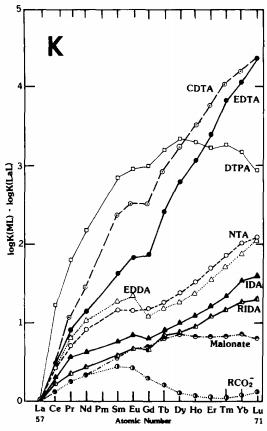 Due to the contracted nature of the 4f orbitals, the lanthanide ions characteristically do not exhibit covalency in metal-ligand bonding, which is strongly reflected in their chemistry. Therefore, the almost linear increase in $K_\mathrm{f}$ going from $\ce{La^3+}$ to $\ce{Lu^3+}$ is entirely to be expected. The ionic radius decreases going across the 4f block, and consequently, the interactions with the ligand (primarily electrostatic in nature) become stronger.

However, as the title suggests, I'm interested in the slight blip at gadolinium ($\ce{Gd^3+}$). The value of $K_\mathrm{f}$ seems to be lower than would be expected, and the astute reader will notice that this applies not just to the EDTA complexes but also for some of the other ligands investigated.

Is there a reason for this anomaly?

For all ligands which have been studied, the gadolinium complex is less stable than would be expected from the simple electrostatic model. This behavior has been called the “gadolinium break” and cannot be explained, as was originally attempted, by assuming a steric effect, since it is still apparent in ligands for which there should be no steric interference.

Of course, this is more than half a century ago. I would be grateful if anybody could provide either a sound theoretical explanation for why the Gd formation constants should be smaller or a newer reference that explains this effect.

If you consider the solvent extraction of lanthanides by reagents such as H-DEHPA, then to a first approximation the distribution ratio is given by the equation.

If you plot k as a function of atomic number for DEHPA dissolved in most organic solvents (solvent extraction term is diluent) then the value goes up as a function of Z. But the line has bumps on it.

The reason is that the extraction reaction is

As you go from one side of the lanthanide group to the other the binding of the lanthanide to the anionic DEHPA ligands is likely to become stronger, but the value of $n$ changes in several steps. This will give bumps on the graph of $K$ for both the extraction of the lanthanides and also for their binding to ligands such as EDTA.

From $\ce{La}$ to $\ce{Eu}$, the f orbitals are being filled with 1 electron per orbital (all unpaired). Gadolinium has an anomalous configuration, $\ce{[Xe] 4f^7 5d^1 6s^2}$ because it acquires greater stability by promoting an electron to the orbital d, and keeping all the electrons in f unpaired.

However, from $\ce{Gd}$ to $\ce{Lu}$, a new stage begins, the electrons begin to pair in the orbitals f. It is this transition that reflects in the constant formation.

Note that for ions, in the complex they have gained electrons leading the reasoning to the same of the atom.

Not the answer you're looking for? Browse other questions tagged inorganic-chemistry thermodynamics coordination-compounds rare-earth-elements or ask your own question.

15
The bond in coordination complexes
7
Why does Co2+ have 7 electrons in the 3d orbital, and not 5 like Mn?
1
Are all complexes with a polydentate ligand examples of chelation?
8
Why do transition metals form particularly stable complexes?
2
Which complexes are stable: ammine complexes or carbonyl complexes?
9
Bonding in alkali metal complexes
0
What is the binding mode of the ligand in complexes with quadruple metal-metal bonds?