What might serve as an initial starting photocatalyst for this large water-splitting solar simulator?

Question: What might serve as an initial starting photocatalyst for this large water-splitting solar simulator? Surely there must have been some planned experiments!

The Gizmodo article Insane Light System Blasts the Energy of 10,000 Suns and Phys.org's Let there be light: German scientists test 'artificial sun' both describe the large, powerful concentrated light source called Synlight which has been built by the German Aerospace Center (DLR).

This large (~350 kW!) solar simulator - built from 149 high intensity xenon arc lamps, all collimated/focused to a single 20x20cm area - will be used to test and develop materials and catalysts that will allow photochemical splitting of water to yield hydrogen gas, to be scaled up later and used with a solar concentrator instead of electrically powered lamps. Hydrogen could be used as fuel directly, or to synthesize hydrocarbon fuels when combined with carbon dioxide or monoxide.

Water is transparent over most of the sun's useful spectrum, and this is for the obvious reason that the wavelengths reaching the ground are those not already absorbed in the atmosphere. Thus a photocatalyst will be necessary for a high yield of hydrogen gas from concentrated solar light.

From the Gizmodo article:

When the array is focused onto a single spot, it heats metal to 1,475 degrees Fahrenheit (800 degrees Celsius), which is then sprayed with water vapor. The metal reacts with the oxygen in water, and hydrogen remains. With further heating, the oxygen is once again separated from the metal.

There are certainly easier ways to heat a metal plate than building a giant solar simulator, so I assume the point is to provide an intense source of photons with a somewhat similar spectrum to sunlight as a test platform for various catalysts. But the quote suggests the surface will react with the oxygen released, and need to then be cycled to higher temperature to release it. This does not sound like a very practical photocatalytic process.

So far I have not found anything clearer about what kinds of catalysts are likely to be investigated, but there must be some potential candidates. Based on known photocatalytic water splitting mechanisms, or if someone can find a discussion by DLR, what would be a starting point, or proof-of-concept photocatalyst that might work here?

below: Images from here, photo credit: DLR (top), DPA (bottom). The shape of each reflector is likely to be close to an ellipsoid with the xenon arc at one focus and the sample near the other. This way a ~100 cm diameter reflector can illuminate a much smaller 20x20cm sample. 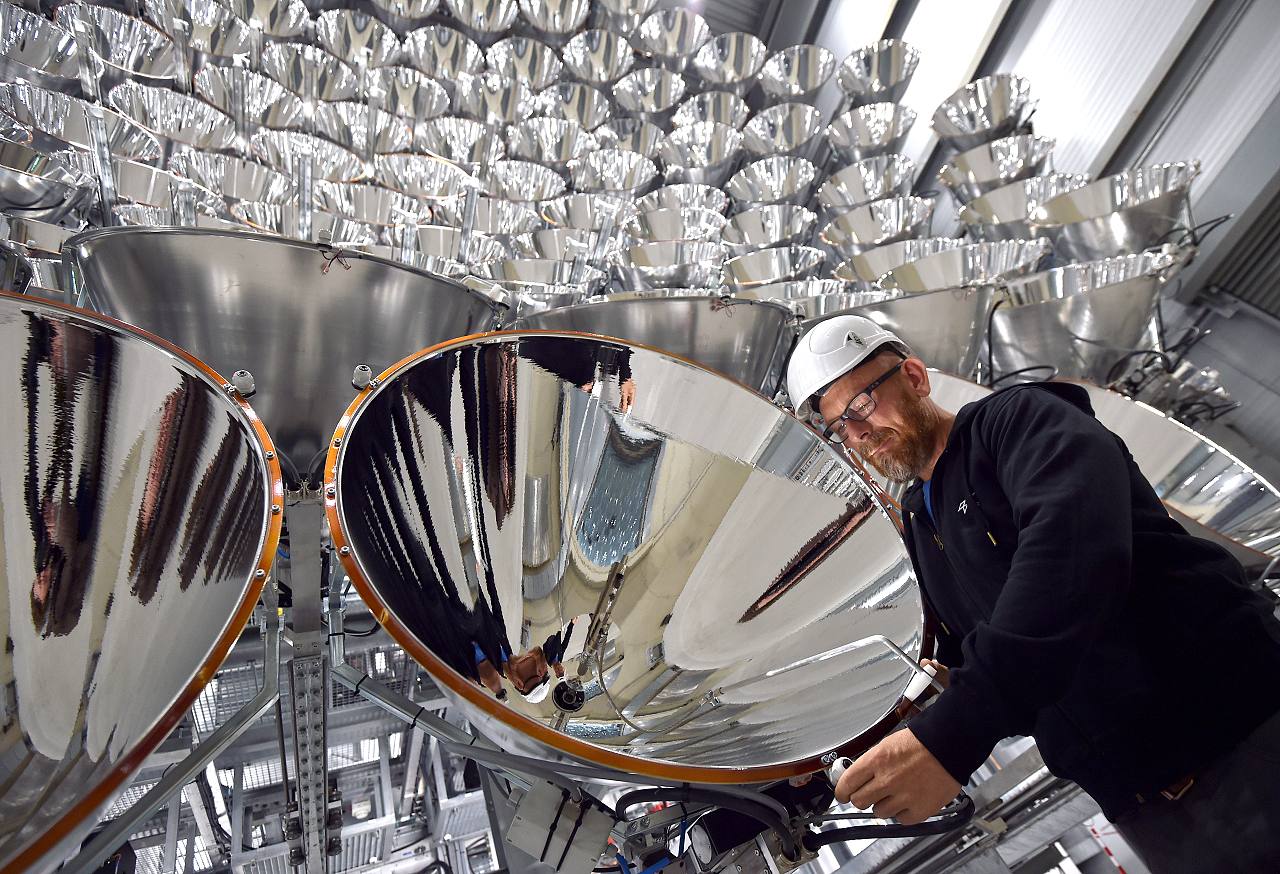 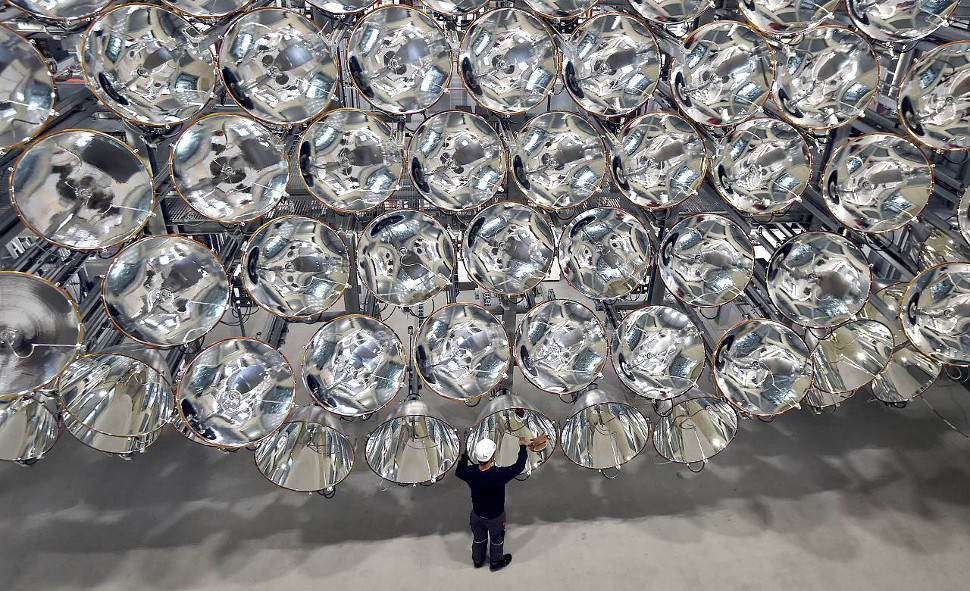 Vitamin B-12 is a photocatalyst, see, for example, https://pubs.rsc.org/en/content/articlelanding/2018/ra/c7ra13037f#!divAbstract and also https://www.ncbi.nlm.nih.gov/pubmed/29271445 , but it has not been applied to water splitting!

What has been used is TiO2, see this source to split H2O into H2 and O2.

Mechanics: The action of light on TiO2 creates electrons (e-) and electron holes (h+). Some reactions:

One of the less desirable reaction is:

Not the answer you're looking for? Browse other questions tagged aqueous-solution water catalysis photochemistry or ask your own question.

5
Electrolysis Lab
11
What is the reason for anomalous expansion of water?
3
Overpotential for photocatalytic water-splitting with TiO2
3
What will happen if I put this chemical into my water tank?
2
Oxidation of water — what is the half reaction for water?
6
What is a good source for large tables on the properties of water?