How do native sulfur crystals form?

I was visiting an elements exhibition in the Ulster Museum (Northern Ireland) and there were these native sulfur crystals on display. 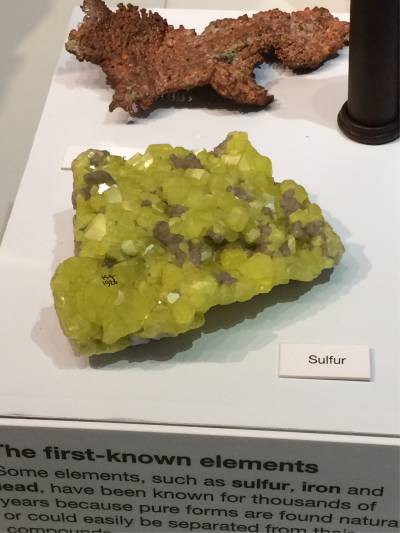 My question is how do sulfur crystals like these form in nature? Does the sulfur precipitate out of a solution? Are they the product of a chemical reaction? I am confused because of sulfur's negligible solubility in water and I couldn't imagine any other way such perfect crystals could form.

I am really interested in making such crystals myself but as I have said, I don't know by what process or under what conditions this crystallization of sulfur occurs.

Tl;DR: Wikipedia mentions some of the ways in which elemental sulfur is produced naturally:

I found a paper1 which discussed #3 point in details. It said that although sulfide minerals can be oxidized to zero-valent sulfur by sulfate reducing bacteria in presence of molecular oxygen, it may pose the following problems:

So, in order to overcome these problems, scientists proposed four possible mechanisms as a means to form native sulfur:

These reactions are found to be thermodynamically favorable and especially useful in environments containing dissolved sulfide. This provide evidence that microbial species functioning in such environments can produce native sulfur in absence of light and external oxidants such as $\ce{O2}$, nitrate, and metal oxides.

7
Which allotropes of sulfur exist naturally?

8
Why do sulfur and oxygen form sulfur dioxide?
1
Is +6 really the most stable form of sulfur?
5
Why does sulfur form S8 instead of S3?
2
Potassium Alum Crystals
13
How to make pyramid-shaped NaCl salt crystals
4
Struvite crystals: how do they form?