Models for diastereoselectivity in nitronate additions

In the scheme below (taken from the referenced Chem. Eur. J. paper on the synthesis of Tamiflu), there is a step in which a nitronate anion (the anion derived from 5) is added into an electrophile 6, undergoing what is essentially a Michael addition.

This Michael addition sets the nitro stereocentre, as the nitronate can evidently react from one of two faces. This isn't entirely unusual, the same thing happens with enolates during aldol reactions, and the facial selectivity is explained using various models depending on whether the reaction goes via an open or closed TS (i.e. Zimmerman Traxler vs open chain models).

Clearly the nitronate anion is able to exist in several conformations, however if one draws the Newman projection, then the conformation leading to the product is the one in which H is perpendicular to $\ce{C=N}$ as if were the large group (not the most sterically favored since the ester and the alkyl chain are clearly larger).

I'm hoping someone might know the name of a model that explains the selectivity (in the same way that a Zimmerman Traxler TS rationalises a chelated aldol and the Felkin Ahn model may be used to rationalise the stereochemistry from addition into chiral aldehydes). The closest thing I can think of is the Houk model, however, this itself doesn't give the correct product and I can find no literature from Houk's group that mentions this class of reactions. 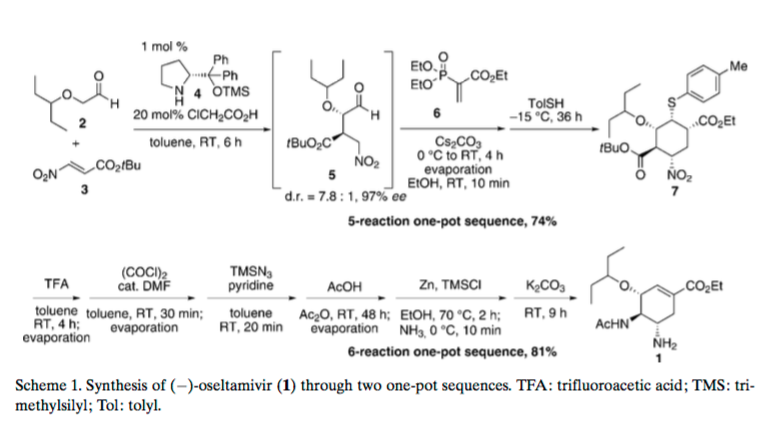 Dave Evans taught me that you should generally analyze these types of problems by drawing out allyl conformations. 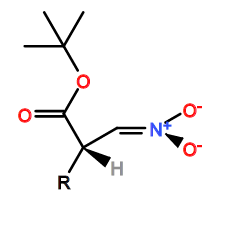 I've drawn the nitronate to minimize 1,3-allylic strain. Now, the top face of the nitronate is largely blocked by the t-butyl carboxylate. I strongly suspect that having a bulking alkyl group there is important to getting good selectivity.

This means that the electrophile will react on the bottom face, and that will lead to the desired stereochemistry depicted in 7 with the nitro group down on the ring.

Not the answer you're looking for? Browse other questions tagged organic-chemistry reaction-mechanism reference-request stereoselectivity or ask your own question.