Help me understand electrochemistry and batteries

I have a brief understanding of how batteries work, but there are still some things that I can't put together. Therefore I would like to ask for help in understanding how batteries work. Every time I try to learn about batteries, I end up seeing the Zinc and Copper cell, but I can't connect with any of these materials. Therefore I would like to ask what would happen if instead of Zinc and Copper, one would make a battery made out of... Steel and Aluminum, for example. Or any materials that are randomly or wrongly chosen. 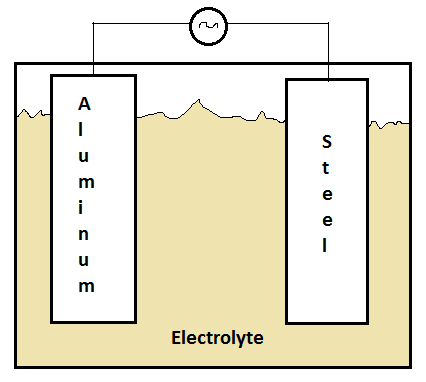 I have chosen a random example because I think I can understand better if a system doesn't work rather than having a system that works. So now the questions:

By work, I mean store energy. Numbers such as electrode potential and cell potentials would also be useful.

You can't "connect" with Zn/Cu? You'll need to be more clear, I don't understand what you mean. (You seem to be implying that you understand Al and steel in a more comprehensive way than zinc or copper, but that doesn't seem plausible to me.) The zinc half cell reaction is Zn°(s) + H2O + H+ → Zn++(aq) + 2e- + H2O + H+ (pH << 7 ) or eliminating the "by-standers" Zn°(s)→ Zn++(aq) + 2e-. The chemical reaction at the copper electrode (and it would be the same reaction for many electrically conductive and inert electrodes, such as Pt (platinum), C (graphite), Au (gold), Aq (silver), and many more) is 2H+(aq) + 2e- → H2↑ (pH << 7) where I've 'canceled' the by-standers again. There are two chemical reactions going on, one at each electrode. The simple analogy is two cups with a tube between them. If the cups and the tube are all filled with water, then water will flow from one to the other if one is higher (and of course one lower) than the other. The water flows because the gravitational potential energy is greater for the water in the higher cup. Well, energy flows if the half-cell reaction (the reaction on one electrode) is more energetic than the other. Please refer to http://www.chemeddl.org/services/moodle/media/QBank/GenChem/Tables/EStandardTable.htm or http://hyperphysics.phy-astr.gsu.edu/hbase/Tables/electpot.html or https://en.wikipedia.org/wiki/Standard_electrode_potential_(data_page) for tables of just a few of the possible redox reactions (note that most of the half-reactions listed are inorganic, with a couple of exceptions. There is an enormous number of organic redox reactions which aren't generally tabulated.) The hyperphysics page links to a further discussion. Aluminum is always (at least, on this planet's surface) covered by a insulating layer of Al2O3. I don't know what would happen if you connected a piece of Al to a piece of "steel". First because I don't know what your electrolyte is, second because commercially available aluminum is, just like steel, an alloy of several elements. In other words, neither is a pure (or nearly pure) element, unlike the copper or zinc you can get. But, there's no reason why you couldn't substitute a piece of stainless steel for the Cu electrode, or even carefully open up a zinc-carbon battery's carbon electrode (if you can find one).=============== The important facts are that each half-cell reaction has a "potential" and the larger the difference is between the two half-reactions, the greater the current flow and voltage will be between electrodes. Since many of the half-cell reactions won't work in the same electrolyte, salt bridges (see Wikipedia) can be used to connect the fluids. (BTW, there's another reason why the use of steel can be a problem, there can be various reactions on the surface of the steel (corrosion) in which one part of the surface acts as an anode, and another part acts like a cathode. If an electrode is "too reactive" in a particular electrolyte, these side reactions can decrease the amount of electricity flowing to the other electrode. Cu/Zn is popular because all you need is a copper wire, a lemon (or even some vinegar (and salt)), and something that's either made of zinc, or has been galvanized (like a galvanized nail, which is coated with a layer of (mostly) zinc). While it doesn't seem like the hydrogen half-reaction involves the copper, actually the voltage (potential) of that reaction depends on the nature of the surface of the metal, sanding the surface until it is 'bright' will increase the amount of H2 produced. So, to sum it up, first you need two different oxidation/reduction half-cell reaction components, then you need to connect them in an electrolytic system so that the circuit is complete. An important fact, but sometimes overlooked in beginning discussions of half-reactions, is that the reaction should be considered reversible with the arrow → reversed ← as well as changing the sign of the potential (multiplying it by -1, so if it is negative it becomes positive, and vice versa). Also note that many tables assume an aqueous environment, and often an acidic or basic pH. The tendency of any "randomly chosen" electrodes to work, depends on the system they create (including your choice of electrolyte and pH). In a sense, half-reactions are a clever way of separating chemical reactions, like putting a paddle wheel into a stream of flowing water, to use some of the energy being release by the chemical reaction. If you didn't keep the two reactions separate, all that would happen is the chemical reactions would generate heat instead of electricity (and heat). In other words, putting zinc metal into acid will generate hydrogen gas (as long as a surface, maybe even the zinc) exists for the gas to form on), and won't generate any electricity (because the electrons aren't being forced through the circuit). This answer is a little disorganized, sorry.

2
Galvanic Electrochemical Cell Without half cells
1
Electroplating a spoon (electrolytic cell) using a electrochemical voltaic cell
8
What is the precise definition of maximum work in the context of electrochemistry and thermodynamics?
2
How does an anode metal come into solution if it cannot react with an electrolyte?
0
How does current start to flow when galvanic cell is first connected?
1
Graphene in Lithium-ions batteries: why?
0
Enthalpy of Reaction and Efficiency of Electrochemical Energy Devices
0
What is the relationship between electrodes and ions in a voltaic cell?