I read that the electronic configuration of uranium is [Rn] 5f³ 6d¹ 7s² . Given that the subshells fill in the order 5f --> 6d, why is the 5f subshell only partially filled? Why do electrons fill the 5f subshell partially then proceed to fill the 6d subshell?

I am sure you are familiar with the rules for assigning electron orbitals, I will briefly descibe them here:

Electrons fill orbitals in a way to minimize the energy of the atom. Therefore, the electrons in an atom fill the principal energy levels in order of increasing energy (the electrons are getting farther from the nucleus). The order of levels filled looks like this: 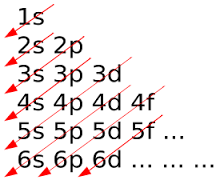 When assigning electrons in orbitals, each electron will first fill all the orbitals with similar energy (also referred to as degenerate) before pairing with another electron in a half-filled orbital. Atoms at ground states tend to have as many unpaired electrons as possible. This explains the behaviour of Chromium: Z:24 [Ar] 3d54s1 (note here the the one electron in 4s orbital while the d orbitals are occupied with single electrons of one spin direction)

Although the Aufbau rule accurately predicts the electron configuration of most elements, there are notable exceptions among the transition metals and heavier elements. The reason these exceptions occur is that some elements are more stable with fewer electrons in some subshells and more electrons in others and a notable example is uranium, for it to acquire maximum stability is usually having this ground state: Uranium: Z:92 [Rn] 7s2 5f3 6d1

Not the answer you're looking for? Browse other questions tagged electronic-configuration elements periodic-table or ask your own question.