Question: (more than one options are correct) 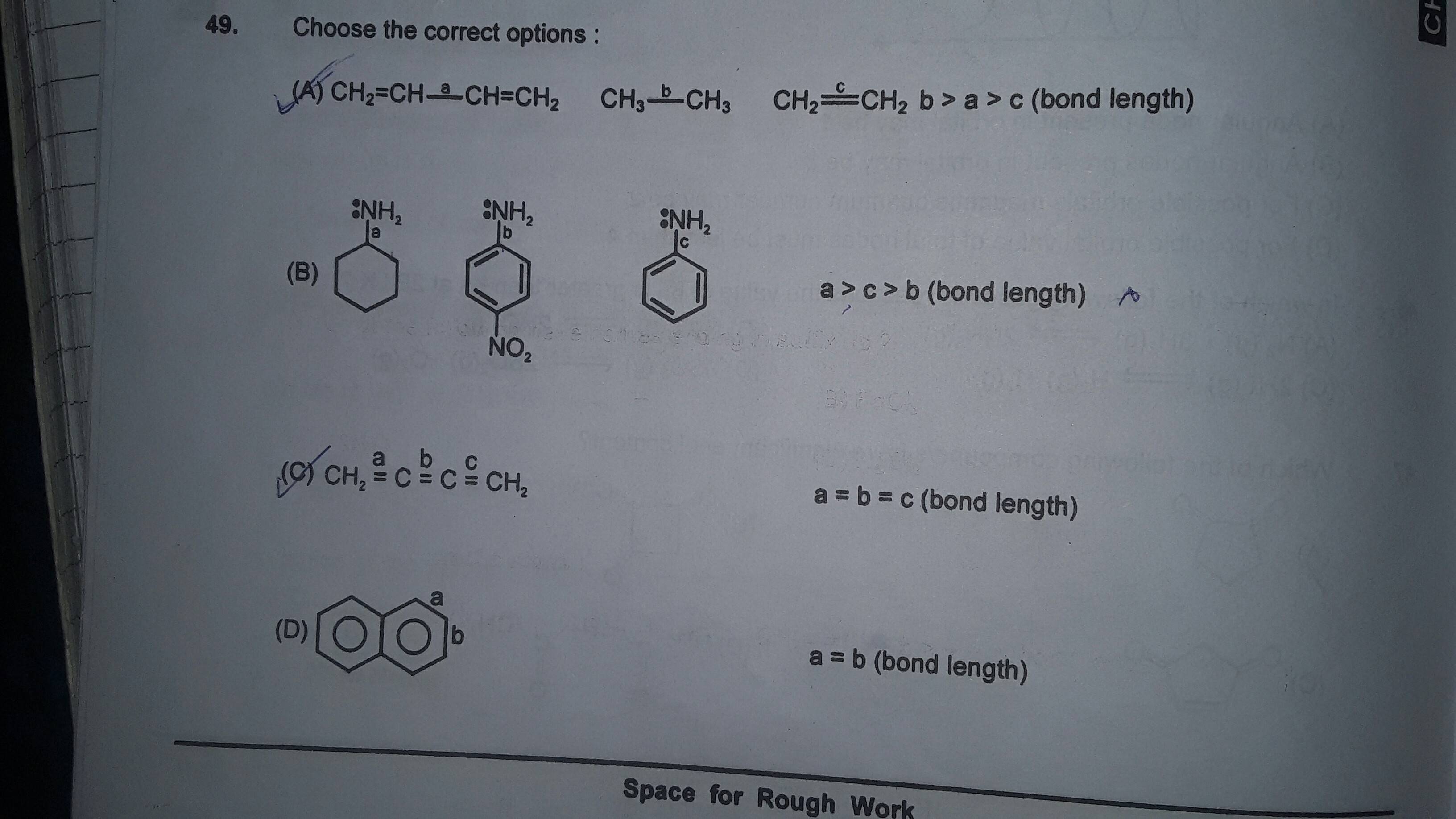 Option A: is correct as bond length of a pi bond is less than that of a sigma bond, hence a > c as there will be a double bond character in bond a

Option B: there will be an extra resonating structure of b. Hence there will be less double bond character in b than c. So, bond length of b>c. Thus, option B should be incorrect but it is given correct.

Option A and B both are given correct. Moreover, I can't understand how to compare bond lengths in options C an D.

The last molecule is a double bond. This will be shortest as the other two bonds are single bonds.

In the first molecule, there is no resonance stabilization. The electrons of the nitrogen atom of the amine group are not delocalized. The nitrogen-carbon bond in this molecule exists as a single bond.

In the second and third molecule, there is resonance stabilization; therefore, the nitrogen-carbon bond has a partial double bond character.

From the previous two conclusions, we can infer that the $a$ will be the largest among the three.

Between the second and third molecule, the third one has a deactivating group $\ce{NO_2}$. A positive charge in the benzene ring is very destabilizing. The nitrogen atom of the amine group tries to help by delocalizing its electrons for a longer time. Therefore, the partial double bond character of nitrogen-carbon bond in the second molecule is more than that of the third molecule.

While all the three bonds are certainly double bonds, they are connecting different types of atoms.

The second bond ($b$) is a bond between two $sp$ hybridized atoms.

From the above conclusion, we can infer that the length $b$ is going to be the smallest among the three bond lengths.

This molecule is symmetric along the vertical line. Therefore, the bond lengths $a$ and $c$ shall be equal.

Unlike benzene, the carbon–carbon bonds in naphthalene are not of the same length. The bonds C1−C2, C3−C4, C5−C6 and C7−C8 are about 1.37 Å (137 pm) in length, whereas the other carbon–carbon bonds are about 1.42 Å (142 pm) long. This difference, established by X-ray diffraction,[17] is consistent with the valence bond model in naphthalene and in particular, with the theorem of cross-conjugation. This theorem would describe naphthalene as an aromatic benzene unit bonded to a diene but not extensively conjugated to it (at least in the ground state). As such, naphthalene possesses several resonance structures.