Mechanism for basic hydrolysis of α-chloronitrile to ketone? 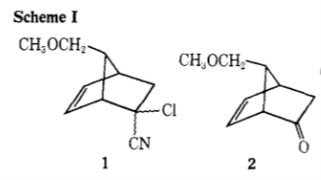 In Corey's 1969 prostaglandin synthesis,1 compound 2 is formed from compound 1 by:

[...] treatment with 2.5 equiv of potassium hydroxide (added as a hot saturated aqueous solution) in dimethyl sulfoxide for 14 hr at 25-30°.

Your analysis is slightly incorrect, actually. If you do a $\mathrm{S_N2}$ on the chloride, hydrolyse the nitrile, and decarboxylate, you end up with the wrong oxidation state:

Instead, if you actually get to the cyanohydrin, you could (in theory) simply lose $\ce{CN-}$ to form the ketone:

However, a $\mathrm{S_N2}$ reaction at that centre is going to be difficult, to say the least.

The reaction has been studied by Shiner et al.,1 who determined that the primary site of attack is likely to be the nitrile. They wrote:

No mechanistic studies of the hydrolysis step have previously been reported, although pathways involving nucleophilic displacement of chloride or cyanide, affording intermediate cyano- or chlorohydrins, have been proposed. A priori we regarded both $\mathrm{S_N2}$ and $\mathrm{S_N1}$ displacements as improbable in these systems.

The immediate product of nitrile hydrolysis is the amide, and the α-chloroamide intermediates were actually isolated:

The mechanism after this involves a cyclisation of the amide onto the $\ce{C-Cl}$. The exact steps are not entirely clear. However, the following was proposed:

Not the answer you're looking for? Browse other questions tagged organic-chemistry reaction-mechanism synthesis carbonyl-compounds hydrolysis or ask your own question.

3
Can vinyl alcohol react as a dienophile in Diels-Alder reactions?