Is it possible for three carbon double bonds to form next to each other in a carbon chain?

There's two different ways to stick double bonds next to each other.

The first is to put the two double bonds right next to each other, the "cumulenes":

In these compounds, the pi orbital of one double bond does NOT hybridize/delocalize with the pi orbital of the adjacent double bond. For example, in the structure on the far left, the three carbon propadiene, the two end carbons are hybridized $\ce{sp^2}$, and the center carbon is hybridized $\ce{sp}$. The remaining two $\ce{p}$ orbitals of the center carbon participate in the double bonds, one to each. But because the two $\ce{p}$ orbitals are perpendicular to each other, there's no communication between the two pi bonds - they're perpendicular to each other, too. One of them is in the plane of the screen, and the other is in the plane going in/out of the screen. (Or, it is in the simplest model of organic bonding that's taught. Once you get into things like molecular orbital theory things get more complicated, but the fact of two non-interacting orbitals remains.)

You can see this by looking at where the hydrogens are located in propadiene. 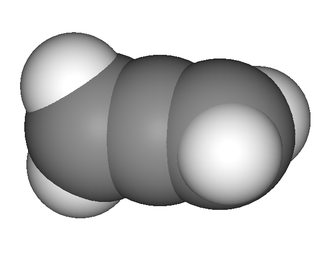 There's another way double bonds can be combined, and that with an interveneing single bond, the "polyenes":

In a polyene, all the carbons are $\ce{sp^2}$ hybridized. Unlike a cumulene, the pi bonds of a polyene are all on the same "side" of the polyene. For example, in the polyene shown here, all the pi bonds are sticking in/out of the screen.

But unlike benzene, the end effects for the bond-swap resonance form means it's less stable than the "normal" bond locations. This means it contributes less to the hybridized form. So while the polyene chain doesn't behave entirely like an alternating single/double bond form, it's not like it's really a "1.67" or "1.5" bond order, either.

74
Bonding in diatomic C2, a carbon-carbon quadruple bond?
20
How can the Bonding in IF7 be explained using LCAO method?
4
Can a s orbital overlap with any p orbital to form a sigma bond?
10
Delocalization of pi electrons in nitrate ion
8
Is the hybridization only related to atomic orbitals but not to the molecular orbitals?
2
Do chemists use molecular orbital theory to explain physical characteristics of a compound (i.e. melting point, boiling point, etc)