Order of the subshells in an electron configuration

However, when it comes to make a graphical representation of an electron configuration (which follows an order of increasing energy), she doesn't put the subshells having the same energy in the same level, like in the following picture: 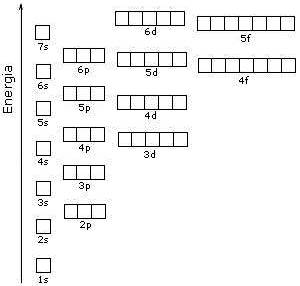 Shouldn't the subshells 2p and 3s (which both have an energy equals to 3), as well as 4p and 3d, be put in the same level, since they have the same energy?

Whilst the said concept is correct, as orbitals increase in number the less they are attracted to the centre of nuclei, consequently the further they move away the higher the energy they possess.

The 2s electrons spent more time closer to the nucleus (when compared to 2p electrons) and this reduces the energy of electrons in s orbitals, the nearer they get, the lower the energy. This is why the s orbital always has a slightly lower energy than p orbital at the same energy level.

The 2s, 3s .... orbitals get progressively away from the nucleus.

Not the answer you're looking for? Browse other questions tagged inorganic-chemistry electrons or ask your own question.

3
Is my analysis of quantum numbers describing the ground state of At correct?
1
Why isn't 4s1 electron of Chromium the last electron?
3
How do I determine the number and order of ligand orbitals?
1
Why does a neutral atom of beryllium not have any electrons in a p orbital?
0
Confusion regarding orbital, electron and Quantum no’s