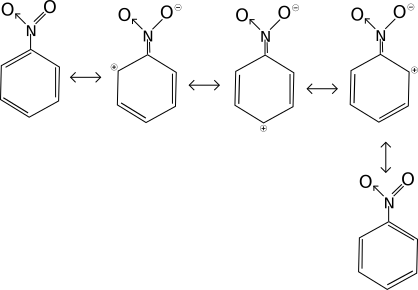 It is written in the book that because the positive charge is always at $-o$ or $-p$ positions, Nitro group in benzene has meta directing effect. Which means it is easier to attach substituent electrophilic groups at $-m$ position than $-o$ and $-p$ positions.

The reason for the above conclusion is given that because of positive charge at $-o$ and $-p$,$-m$ is relatively negatively charged.

But then look at resonance structures below (I think I drew them properly),

These have a negative charge on $-p$ and $-o$ group. This simply conflicts with everything said in the last paragraph.

Also, these structures are as prominent as others in the book because of having the same number of charges.

Your diagram is wrong. Have a look at my diagram:

Let me know if you do not understand the curved arrow representation.

Not the answer you're looking for? Browse other questions tagged organic-chemistry reaction-mechanism resonance or ask your own question.