Why is ruthenium(III) intensely colored in water

I was preparing a solution of ruthenium(III) chloride (aqueous) when I added some (nearly black) $\ce{RuCl3 . H2O}$ to the water. I was surprised that a tiny amount could dye the water so well, I'd say you can even compare this to $\ce{KMnO4}$.

The question is why is the color so intense?

Ruthenium(III) is a $\mathrm{d^5}$-system so the transitions should be spin-forbidden if we are talking about $\ce{d\bond{->}d}$ transitions. If this is the case we can consider a CT-transition. But if I look at the chemistry of manganese(II) it is slightly pink and doesn't dye water at all although it has the same ligands (chlorido and aqua). And if we compare the colors of manganese(VII), chromium(VI) and vanadium(V) as well as manganese(VII) to renium(VII) with the same ligands, in this case oxido-ligands we see that the more stable states (vanadium(V) and renium(VII)) do not pull electrons that strong anymore and the color shifts further into something invisible to the human eye.

So ruthenium(III) should be even less colored than manganese(II) if we ignore the fact that it has 3 chlorido ligands for a second. So the only option I have left would be the π-donor ability of the chlorido-ligands.

I have read some time ago, that manganese is one of the only elements that form in as their aqueous $\ce{MCl2}$ a cis-dichlorido-coordinated species while all the other (3)d-metals form trans-coordinated ones. And I have already asked about the cis to trans difference in another post so I know now that it does indeed make a difference.

I'd like to compare this to the ruthenium(III) now but ruthenium(III) in water is somewhat complicated as a lot of possible compounds can form especially as the trihydrate will start to exchange chlorido-ligands for aqua ligands at a certain period of time and the trihydrate salt is said to be yellow-orange like iron(III) while I start with a monohydrate which is black.

I'm not sure whether this effect is now related to the rutheium only or if this is just the case because of some symmetry effect but I can't find a good answer on this anywhere. 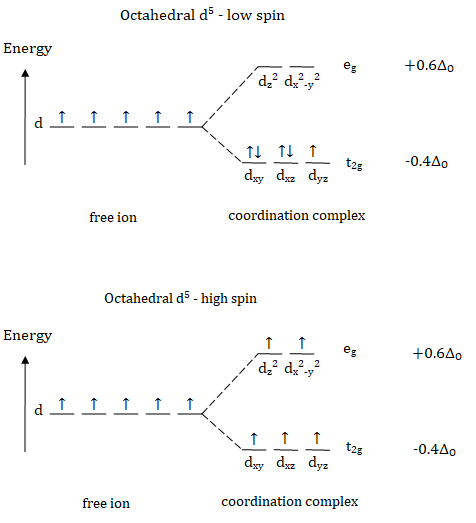 You also need to know about CFSE (crystal field stabilization energy), which is the difference in the energy of the free metal ion, and the metal ion in the complex.

Where $P$ is the mean pairing energy, the energy required to overcome the repulsion between the electrons and pair them together. $\Delta_\mathrm{O}$ is the octahedral splitting parameter, which I assume you already know.

4d and 5d transition metals have large d orbitals, so that the mean pairing energy is usually smaller than the splitting parameter, which results in low spin complexes regardless to the ligand type.

Therefore, a $\ce{Ru^3+}$ ion, which is $\mathrm{4d^5}$, will form low spin octahedral complex, that has spin allowed transitions with intense colors.

About charge transfer. It's possible, but I personally don't know.

Not the answer you're looking for? Browse other questions tagged coordination-compounds transition-metals color or ask your own question.

30
Why do transition elements make colored compounds?
0
Why does mixing inks make subractive colors?
12
What is the reason of the color difference for the cis/trans isomers of tetraamminedichloridocobalt(III) chloride?
7
Why does heating transform the aquacomples of slightly acidified cobalt(II) chloride solution to the chlorido complex?