Select the best (most appropriate, easiest, fastest) separation technique for each pair of compounds shown below: 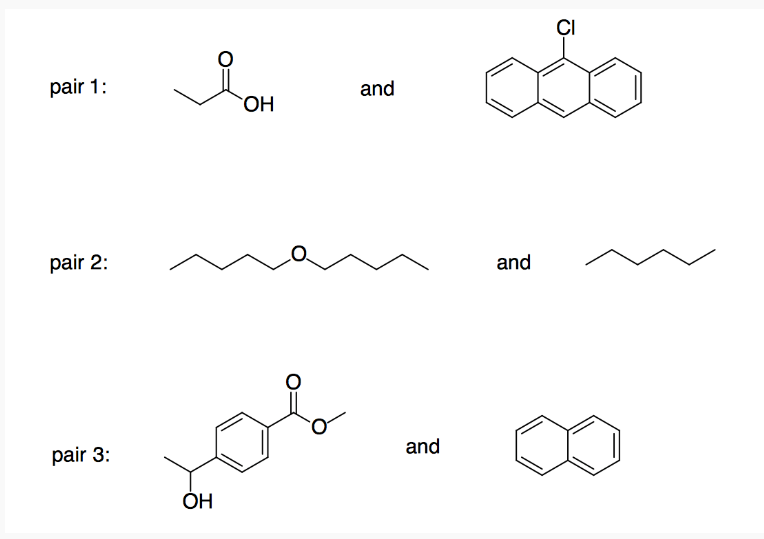 This requires knowledge of what compounds are separated most efficiently/appropriately by what separation technique. Since I did the labs separately I can only attempt to try to meld the concepts together.

Based on the acid I'd use acid-base on pair 1.
Pair 2, since one is polar and the other nonpolar, seems like it needs liquid-liquid extraction (water-diethyl ether extraction)
Pair 3 are polar. Unsure of this one. They'd be slow on a column. Evaporation is based on a low boiling point.

You have correctly identified the carboxylic acid in pair 1. The second conpound is 9-chloroanthracene. Calling it a chlorodiene isn't correct. It's an aromatic compound. Anyway, your conclusion to use acid-base extraction is reasonable.

In pair 2, you seem to overestimate the polarity of the first compound. But there is another, more striking difference between the dipentyl ether and n-hexane.

Dipentylether, $\ce{C5H11-O-C5H11}$, has a much higher molar mass than n-hexane, $\ce{C6H12}$. As a rule of thumb, you can assume that the compound with the higer molar mass will have a much higher boiling point. (There will be exceptions when strong interactions between molecules come into play, such as in the case of hydrogen bonds. But this isn't the case here!) If you look up the boiling points (bp) for both compounds, you'll see that our rule of thumb is supported here. The bp of n-hexane is 68 °C, that of the much heavier ether is > 180 °C. Consequently, distillation (under reduced pressure) is the way to go here.

In pair 3, you seem to misinterpret the nature of the second compound. It's not a diene, but an aromatic hydrocarbon named naphthaline. You might want to read about the properties of these compound and/or the comcept of aromaticity some other time. But for now, let's concentrate on another detail in the structure of the first compound in this pair.

There is an $\ce{OH}$ group in the the first molecule. Here, the term polar is justified! Think about the typical setup of column chromatography. The stationary phase is usually silica (or aluminium oxide), while the mobile phase typically consists of mixtures of not-so-polar organic solvents. Compound 1 can strongly interact with the silica through hydrogen bonding, while compound 2 is an unsubstituted aromatic hydrocarbon. Separation by colunm chromatography is a very promising method for this pair.

Not the answer you're looking for? Browse other questions tagged organic-chemistry acid-base extraction or ask your own question.