Why do the two cycloheptadiene isomers both show four distinct shifts in carbon-13 NMR?

In the following question I have filled in the correct answer for i: 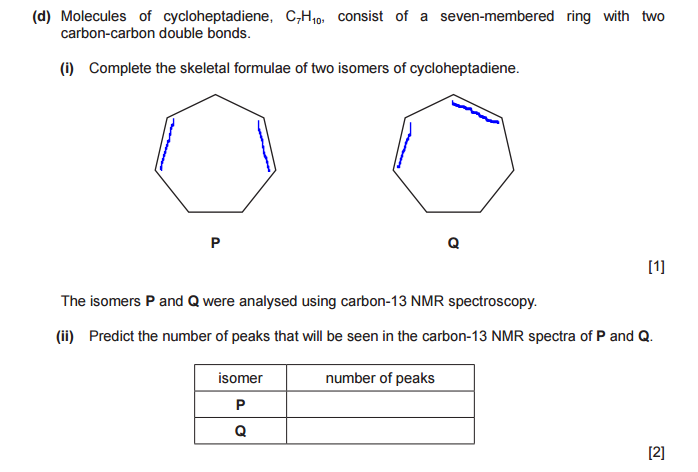 For ii I thought that should be three for Q and two for P,

For Q there are three distinct enviroments for the C atoms:

and for P there are two:

Howevere the correct answer is 4 for both P and Q.

So then I thought maybe they want me to include the splitting of the peaks but in both P and Q there is too much splitting for this to be the case...

Why is the correct answer 4?

What you identified by determining hybridisation and bonding partners weren’t carbons with identical signals but carbons whose signals would appear in a similar range of the NMR spectrum. Two atoms will only give identical signals if they are homotopic or enantiotopic (the latter only in the absence of chiral compounds).

To determine topicity, you first need to determine which elements of symmetry exist in a molecule. Both your cycloheptadienes have the point group $C_\mathrm{2v}$, meaning that there is:

With that in hand you can determine topicity. Homotopic atoms are those:

It is the axis of rotation that transforms each carbon of a certain colour onto its counterpart of the same colour. Thus, all carbons of a single colour are homotopic. Homotopic atoms are always chemically identical and thus will give a signal with the same chemical shift. Chemically non-identical atoms in similar environments will give similar but not identical shifts.

Enantiotopic atoms are those that are transformed onto each other by a plane of symmetry inherent to the molecule. These are only chemically equivalent in achiral environments.

There are indeed 4 carbon environments in both of these molecules, shown below;

A plane of symmetry can be drawn through each, with one environment having only one carbon nucleus. All other sites have 2 carbons.

I don't know that any words will make it any clearer than the picture, but if you aren't sure after looking at this, I can elaborate. 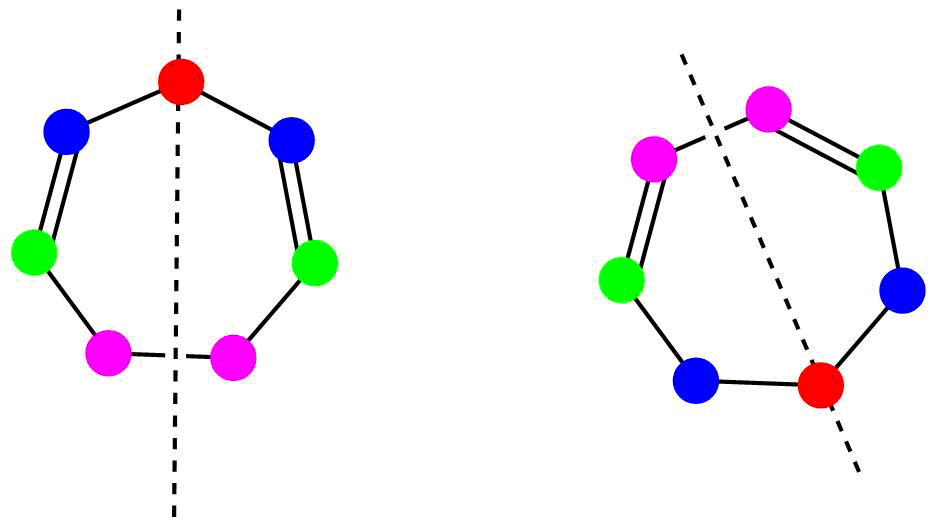 34
Splitting of multiplets in ¹H NMR spectra?
10
HNMR - Peak Splitting
4
NMR and pseudorotation
4
How to explain two NMR spectra of the (allegedly) same compound with slightly different shifts?
9
Why does Carbon-13 NMR not have splitting patterns?
4
The carbon-13 NMR for 1,1,1-trichloroethane
7
What could cause a peak to split into 2 resonances as temperature increases in NMR spectroscopy
0
Shoulders of NMR peaks