Are resonating structures real or not? [duplicate]

We say that hybrid structure is real. It has distinct properties as compared to its Resonating Structure. Is it because that all the experiments we carry out are on a sample, lots of molecules are present. Are they hybrid or are they lots of Resonating Structures in an equilibrium state that they collectively show properties of the hybrid. Also, some structures are said to contribute more to a hybrid structure. What does that mean?

Also, in charged molecules like carbonate ion, the charge is fractional. Won't that mean that electrons get "divided"? I know that partial charges can arise in covalent bonds due to a difference in electronegativity, but this seems different from that.

Resonance is a concept that had to be invented by man because the previous concepts to describe reality were insufficient. Resonance is sometimes wrongly taught as swinging back and forth between the different resonance structures, but that is an idea that people thought up and that has little to do with the actual reality.

It is very hard if not impossible for humans to actually understand the reality of chemistry at a molecular or atomic level. At these scales, quantum mechanical descriptions must be considered and any observed object can be both a wave and a particle — I think, at one point interference patterns could be observed with Buckyballs, confirming the wave-particle dualism up to $\ce{C60}$; just to give you an idea. Considering this, it is very understandable that concepts are hard to grasp and frequently misinterpreted, even by nobel laureates.

The key to correctly understanding resonance is that there are not many resonance structures that co-exist, but that overlaying all the resonance structures together into one gives us a better clue of the chemical reality at atomic scales. Taking the benzene molecule, we do not have double bonds on one side half the time or for half the molecules we’re observing. We have six identical bonds with a bond order of $1.5$. Localised double bonds, if present at any time, should react with halogens in an electrophilic addition reaction, yet that never happens with benzene. (Other experimental proof can also be used.) It is the fact that writing this $D_\mathrm{6h}$ symmetric structure on paper with our Lewis model formalisms is impossible that inspired chemists to think of resonance structures to better explain what is going on.

Each of the terminal carbon atoms has an effective charge of $-\frac12$. How is this possible, you may ask? Molecular orbital theory does the best job of explaining it. The key orbital is the π HOMO which looks as shown in the image. 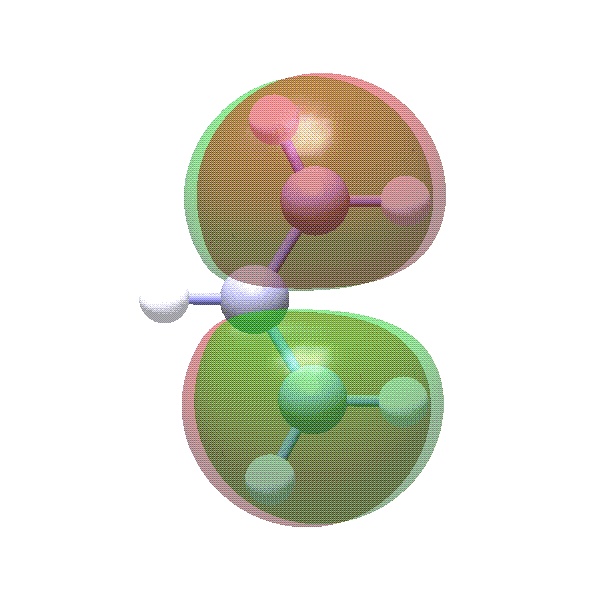 Notice that it is a wave function; it has four lobes, two centred on each of the terminal carbon atoms. If you try to understand this MO with conventional mechanics, you may be inclined to propose some kind of tunneling mechanism for the electrons to get from one lobe to the other. That would be wrong. They are not in one lobe and then go somewhere else, the two electrons are in all four lobes simultaneously. So we can have fractional charges (happens if you add up the electrons on each carbon; proof left to the readed) even without having to split electrons simply because of the wave-like nature of electrons.

Many fascinating observations await you as you enter quantum chemistry and

Be prepared to forget what you think you may know if you decide to dive into this world.

[1]: Taken from Professor H. Zipse’s webpage (LMU Munich). For some reason, the allyl anion system shows N/A. Instead, I linked to the allyl cation which is identical except for one orbital without electrons.

Not the answer you're looking for? Browse other questions tagged organic-chemistry bond resonance hybridization or ask your own question.

39
What is resonance, and are resonance structures real?