What is the reason of the color difference for the cis/trans isomers of tetraamminedichloridocobalt(III) chloride?

The cis and trans isomers of $\ce{[CoCl2(NH3)4]Cl}$ are quite famous as one is purple and the other one is green which is a huge difference in color. Now I can't find any information to why this is the case?

I remember they told me in the lecture on organometallic chemistry when we were discussing substituted carbonylmetallates that a trans-effect occurs where a π-donor trans to the carbonyl (which binds to the metal's d-Orbitals via its antibonding π*-orbitals) increases the electron density in the metal and therefore also increases the the bond's strength ($\ce{M-CO}$) which then changes the bond length. A π-acceptor ligand on the other hand decreases the e-density.

In case of an octahedron the trans isomer would only possess same ligands trans positioned to each other while the cis isomer has mixed ones, too.

But is this the explanation I am looking for or is there another effect I just can't think of right now?

If you search a library for a copy of Inorganic Chemistry by Miessler and Tarr, they have an excellent diagram showing which explains the phenomenon.

The reason the trans isomer is more redshifted (green as opposed to purple) is due to the fact that in the trans isomer, the ligand-metal pi overlapping does not clash. On the other hand, if you draw the ligand-metal pi overlapping generated by two cis $\ce{Cl-}$ ligands, you will find that there is always one orbital that contains a lobe where the ligand overlap does clash. When this clash does exist, it becomes less favorable for the $\ce{Cl-}$ ligands to pi-donate into the metal via that clashing orbital -- so, the $t_\mathrm{2g}^*$ antibonding energy level is closer in energy to the $t_\mathrm{2g}$ bonding energy level, and further in energy from the $e_\mathrm{g}^*$ energy level. In the cis compound, field splitting $\Delta_\mathrm{O}$ is higher and the color should be purple instead of green.

If you are having trouble seeing the clash, draw a $\mathrm{d}_{xy}$ orbital on a metal $\ce{M}$, and then draw two $\ce{Cl-}$ ligands such that $\ce{Cl-M-Cl}$ is a right angle (cis ligands). When you try to show pi-donation from both ligands, you will find that there is one lobe of the $\mathrm{d}_{xy}$ orbital that is used by both; that is the clash that is disfavored.

For $\ce{\textit{trans-}[CoCl2(NH3)4]Cl}$, the point group is $D_\mathrm{4h}$. This is a point group with a rather high symmetry, meaning that there will be few and generally larger electronic transitions between orbitals.

$\ce{\textit{cis-}[CoCl2(NH3)4]Cl}$ features the $C_\mathrm{2v}$ point group. This has a very low symmetry meaning that few orbitals will be truly degenerate. In turn, this means that there will be many more different possible transitions and in general that these transitions will have smaller energy differences.

Note that what I have said in the two paragraphs above are broad generalisations. I did not attempt to draw up generic molecular orbital schemes — which you should always do for a proper discussion. Depending on the results of an MO discussion, it could well be that the larger transitions are found in the cis-complex, contrary to what the above paragraphs may imply.

An attempt to simplify (to make it a bit more comprehensible to a curious highschooler) and explain some of the terminologies used in Xahoc's answer. This is not intended to be a standalone answer and should not be considered as one; please read through the rest of the answers for a thorough explaination.

All coordination compounds have a net stabilizing energy called crystal field stabilization energy (CFSE), due to a crystal field effect with respect to a spherical symmetrical (think of ligands approaching the central metal atom (CMA) equally from all the directions, like a sphere) ligand field; CFSE always has a negative or a positive value and one of its fundamental uses is the prediction of stability of a complex (greater the magnitude of CFSE, greater is the stability). I use a simple formula to calculate CFSE:

The formula doesn't hold much importance here, although the term $\Delta_\circ$ does. What's that? Glad you asked. Before we dive in, something about crystal field theory:

Wait! What's up with that 'absorbed' thing? Nothing much, but it appears that complexes seem to know some unicorn magic. So what they do is: they absorb (a wavelength corresponding to) a particular color and emit a wavelength that corresponds to another color. Don't worry, some noble souls have deciphered that, they follow this:

you reduce the octahedral field splitting energy $\Delta_\circ$ which redshifts the absorbance of the compound.

Excerpts and images that follow are directly from Miessler et al. Content is copyrighted to their respective owners.

Understanding this can be quite tricky unless you're acquainted with angular overlap method. Nevertheless, let's give it a shot.

This is a method of estimating the relative magnitudes of molecular orbital energies within coordination complexes. It explicitly takes into account the orbitals responsible for ligand binding as well as the relative orientation of the frontier orbitals.

Modern computational chemistry allows calculations to predict geometries, orbital shapes and energies, and other properties of coordination complexes. Molecular orbital calculations are typically based on the Born–Oppenheimer approximation, which considers nuclei to be in fixed positions in comparison with rapidly moving electrons.

I'm skipping the description of $s$, $p$ and $d$ orbitals for the sake of simplicity. Further, have a look at this orbital diagram. (click on the picture for a larger image) 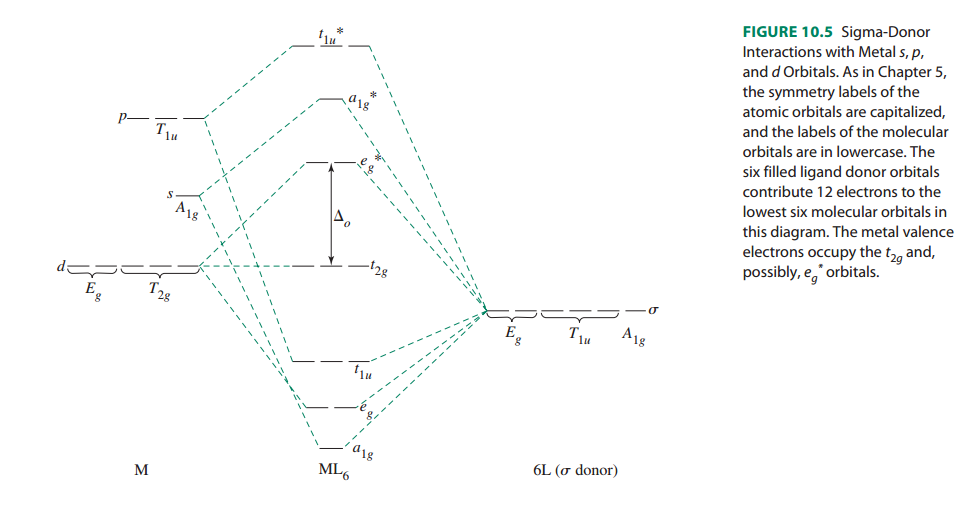 The beautiful colors of many transition-metal complexes are due in part to the energy difference between the $t_2g$ and $\textit{e*g}$ orbitals in these complexes, which is often equal to the energy of photons of visible light.

As an example, if the energy levels of $\textit{e*g}$ decrease, $\Delta_\circ$ decreases. A similar thing is at play in our case, albeit this time the molecular diagrams are different and $\Delta_\circ$ corresponds to a different set of orbitals, if you're still curious I strongly recommend to read about this theory, further simplifications as such are beyond the scope of this answer.

4
Why do isomeric complexes often have different colors?

5
Stability of cis vs trans isomers?
1
Which isomers (cis or trans) are more water soluble?
4
Why is ruthenium(III) intensely colored in water
3
Are glucose and galactose cis-trans isomers of each other?
7
Why does heating transform the aquacomples of slightly acidified cobalt(II) chloride solution to the chlorido complex?
3
cis- and trans-isomers in equilibrium