Why is zinc oxide reduced at a temperature of 1400 degrees Celsius?

I am attaching a graph of the Ellingham diagram on which my question is based. 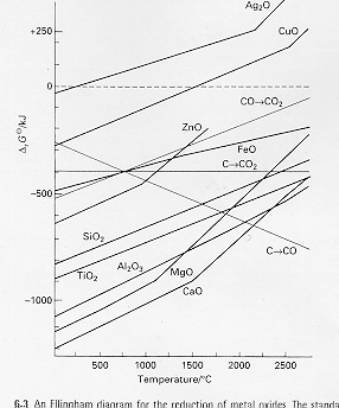 Through plugging in the number it is a very high proportion that goes through the $\ce{CO}$ pathway. Again, the only way any of this is important is if it mentions that $\ce{CO}$ must be eliminated, else the reaction proceeds at low temperature as you say.

Not the answer you're looking for? Browse other questions tagged inorganic-chemistry metallurgy or ask your own question.

1
Plot Binary Eutectic from Temperature of Melting and Enthalpy
0
Zinc oxide reduction in ethanol
15
Why doesn't curie temperature follow a periodic trend in ferromagnetic materials
0
Goldschmidt alumino-thermic process
15
Ellingham Diagram
7
Why is ZnO reduced in this reaction?
5
How can Ellingham diagrams be linked to Gibbs energies of formation?
3
Side product obtained in reduction of cuprous oxide with carbon
1
Oxidation of sulfur dioxide to trioxide and its decomposition under same condition at higher temperature
2
Why is the formation free energy of carbon dioxide almost constant in Ellingham diagrams?