How does density of alkali metals increase down the group?

Size of alkali metals increases down the group, so volume also shows increment, and since volume is inversely proportional to density, how does density also increase down the group?

1) If mass is increasing and volume is decreasing, then density (mass/volume) will increase.

2)If mass is decreasing and volume is increasing simultaneously, then the density (mass/volume) will decrease.

*3)If both mass and volume are increasing, then we need to check which one of them is increasing at a faster rate(since both are contradictory factors)

a) If mass is increasing at a faster rate than volume, then density will increase.

You can apply same logic when both volume and mass are decreasing simultaneously.

Also, note that there is no definite reason for why mass is increasing at a faster rate than volume. So asking "why" does it happen isn't a great question.

Its just because density is directly proportional to mass. And the mass increases faster than that of volume expect for the case of potassium which is lighter than sodium. 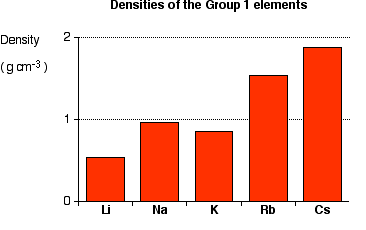 It is the total differential of the d = m/v equation, not the equation itself, that gives you the effect of increasing row number on density. d = m/v tells you nothing about what happens to m and v as you increase the row number of the atom. Don't confuse an equation with the change in the variables in that equation as a function of something else (in this case, At. No.). There's two important effects in answering your question. First, mass increases as you increase At. No.,but it for every 1 unit increase in charge (1 proton and 1 electron), the mass increases by more than 1. (the mass of an electron is less than 1/1800th of the mass of a proton, so its mass can be ignored, as can the volume of the nucleus - its volume is negligible) As at no. increases the element, on average, requires an increasing number of neutrons to keep the atom together, and since a neutron is almost exactly the same mass as a proton, mass increase faster than at. no. Check out this graph https://en.wikipedia.org/wiki/Isotope#Nuclear_properties_and_stability and note that almost all of the stable isotopes are above the neutron/proton = 1 = Z/N line, meaning there is more than 1 neutron to each proton (on average). Note also the curve in the distribution of stable elements. So, mass increases faster than at. no. - what about volume? It turns out that the valence electron determines an element's atomic (covalent) radius. It turns out that all the electrons are held closer in towards the positively charged nucleus as the charge on the nucleus increase (as at. no. increases). There's a couple of reasons for that. One is that the repulsion between electrons as you add an electron to the atom isn't as strong as the attraction between all the electrons and the additional proton. Another way to explain it is that volume increases as the 3rd power of radius,which can be thought of to mean that a little increase in radius gives the electrons a lot more room, so that they're not going to push that valence electron too far out from the nucleus. Another way to explain this is the fact that the inner electrons are not 100% efficient at shielding outer electrons from the nuclear charge (pretty obvious, right? I mean if they were 100% efficient then you'd expect the outer electrons to wander away...) So, each added inner electron doesn't "cancel" each added protons charge as felt by the valence electron, that is it doesn't fully, 100% cancel the attraction. All this means size increases slower than mass (in a given period). Note that going across a row requires a more detailed (quantum mechanical/orbital) analysis because the different orbitals (s, p, d, f, etc.) have different shielding efficiencies. Since you're considering only down the alkali metals, this doesn't have to enter in to your considerations.

Not the answer you're looking for? Browse other questions tagged metal density or ask your own question.

6
Why is potassium less dense than sodium?

0
Why does cationic charge density affect metallic bonding?
2
Why alkali metals have bcc structure?
24
Solutions of Group 1 and Group 2 metals in Ammonia
2
Density of water increases from 273 to 277 K due to increase in entropy?
6
Why is potassium less dense than sodium?