Canonical MOs vs. Localized MOs: Do both represent reality in the same way?

I have two questions:

NOTE: In the below, I'm implicitly discussing a ground-state, closed-shell wavefunction, where all occupied orbitals are doubly occupied. The discussion would be similar for open-shell wavefunctions, but there are complexities that I won't address here. Also, once one starts noodling at excited states, things get complicated pretty quickly, and (AFAIK) some manipulations that are valid for a ground state wavefunction are invalid for excited states.

The "canonical" MOs (CMOs) are called such because they are in a certain sense the "default" MOs for a wavefunction. The sense in which they are the "default" is that they diagonalize the Fock matrix that defines the energy of the system and is used in the course of the self-consistent field (SCF) calculation of, e.g., the Hartree-Fock method for solving the approximate many-electron problem.

If LMOs are equivalent and have the same energy then why do calculations always end up with canonical molecular orbitals and never with LMOs?

As noted above, the reason why we always get CMOs out of an SCF energy calculation is that they are the set of orbitals naturally associated with the solution of the SCF problem.

And wouldn't there be an unlimited amount of equivalent solutions?

Yes. Every possible unitary transformation among the occupied canonical orbitals, of which there is indeed an unlimited number, would provide a set of orbitals that gives an equivalent total wavefunction. Not all of these transformed orbital sets are especially useful, however. Specific examples of useful ones include the various localization transforms that are the topic of the question, the series of variously defined "natural orbitals", and (somewhat related) the Löwdin symmetric orthogonalization for atomic orbitals.

Is this just a mathematical gimmick or does this represent the reality? ... Or is this just a thing we do because it makes it easier to understand?

The transformed MOs do represent reality, and often provide a very powerful and/or convenient means for analysis and understanding of the overall wavefunction. You do have to know what is or is not a valid use of any particular set of transformed orbitals, however.

One specific application of transformed orbitals I know about that seems very powerful is the family of local pair natural orbital (LPNO) methods for accelerating correlated calculations. The v4.0 release of ORCA includes implementations of their advanced domain-based (DLPNO) version of the method for several calculation methods (MP2, CASSCF-NEVPT2, etc.; see various of the 2016/2017 Neese citations listed here). The DLPNO-CCSD method has already proven to be extraordinarily powerful in enabling correlated calculations of large systems—the below figure is a reproduction of Figure 5.5 from the ORCA v3.0.3 manual showing the enhanced performance of (D)LPNO-CCSD methods for a series of benchmark systems (click to enlarge): 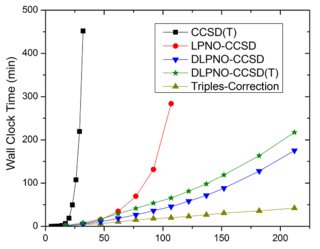 Is it possible for a molecule to be in such a state where every electron is in such a localized orbital?

Inclusion of some un-occupied orbitals (often called virtual orbitals) in the transformation, though, will lead to orbital occupations between zero and two. This is what happens in the classic natural bond orbital analysis of Weinhold & co., as can be seen in the sample natural population analysis output (pdf link; "Occupancy" column) provided on the GENNBO website .

Not the answer you're looking for? Browse other questions tagged quantum-chemistry computational-chemistry molecular-orbital-theory orbitals or ask your own question.

7
How to do Lowdin symmetric orthonormalisation?
19
Observability of Orbitals and Orbital Energies

4
Energies of atomic orbitals on molecular orbital diagrams
13
The "rules" for LCAOs in Molecular Orbital Theory
9
Is the hybridization only related to atomic orbitals but not to the molecular orbitals?
5
How can hybrid orbitals be equivalent?
5
Guess the shape and phase of the MOs of butadiene using LCAO and Hückel's method?
12
"NBO diagrams" versus MO diagrams
4
Hybridisation and the Schrödinger equation