Could someone explain why the high activation pathway dominates at high temperatures? In my mind, I still expect the rate of the low activation energy pathway to dominate due to path of least resistance principle.

In chemicals reactions that have more than one product, being one of them the kinetic product and the other the thermodynamic product, the temperature dependency is a relevant factor. For example, the kinetic vs. thermodynamic control can manipulate the regiochemistry of the alkylation of enolates. In other words, you have a competition between reactivity and stability.

Reactions are usefully to describe it in terms of potential energy diagrams, $\Delta G$ vs. reaction coordinate ($\xi$), where a one-step reaction have a global maximum corresponding to a transition state leading to the product and the free energy of this transition state, relative to the reactant, determine only the rate of reaction. The enthalpy part of $\Delta G$ deal with the stability of the molecule or intermediate but this doesn't give information about the rate of reaction.

Absolute rate theory (or transition state theory), by Eyring, have an expression for the rate constant $k$:

Suppose you have a reaction $$\text{A}\leftarrow\text{R}\rightarrow\text{B}$$ with the energy profile: 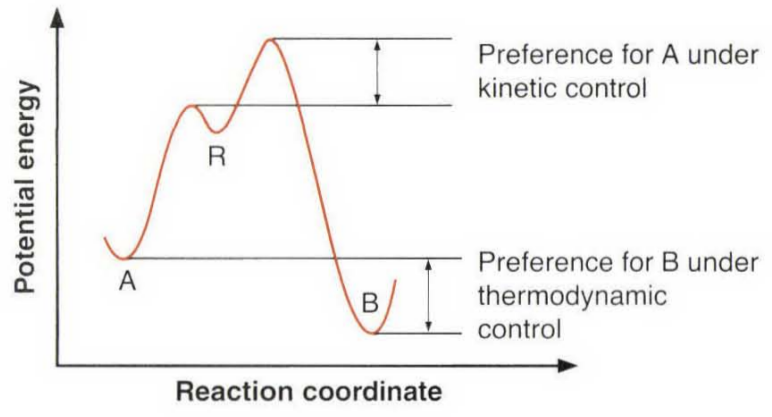 The product A have a lower $E_{a}$ or $\Delta G^{\ddagger}$ (kinetic product), whereas B have a higher $E_{a}$ but a lower $\Delta G$. The potential energy profile generally is temperature independent, i.e. the barrier and the heat of reaction are determined by the molecular structure. When you raise the temperature, the kinetic energy of the molecules is raised and this helps the molecules to pass the potential energy barrier more easily (you can check it by a Maxwell-Boltzmann distribution for a molecule changing the temperature and fixing an energy corresponding to $E_{a}$), being obvious that if the barrier is smaller will be more easy to pass.

If the temperature is high enough to make the molecules pass over all the barriers on the energy profile, the molecules will choose the pathway with the most stable product. All of this is determined by whether the products are or aren't able to equilibrate under the reaction conditions (search for the principle of microscopic reversibility). So, at lowers temperature you will disfavor the equilibrium and only get the kinetic product.

Not the answer you're looking for? Browse other questions tagged kinetics energy temperature or ask your own question.