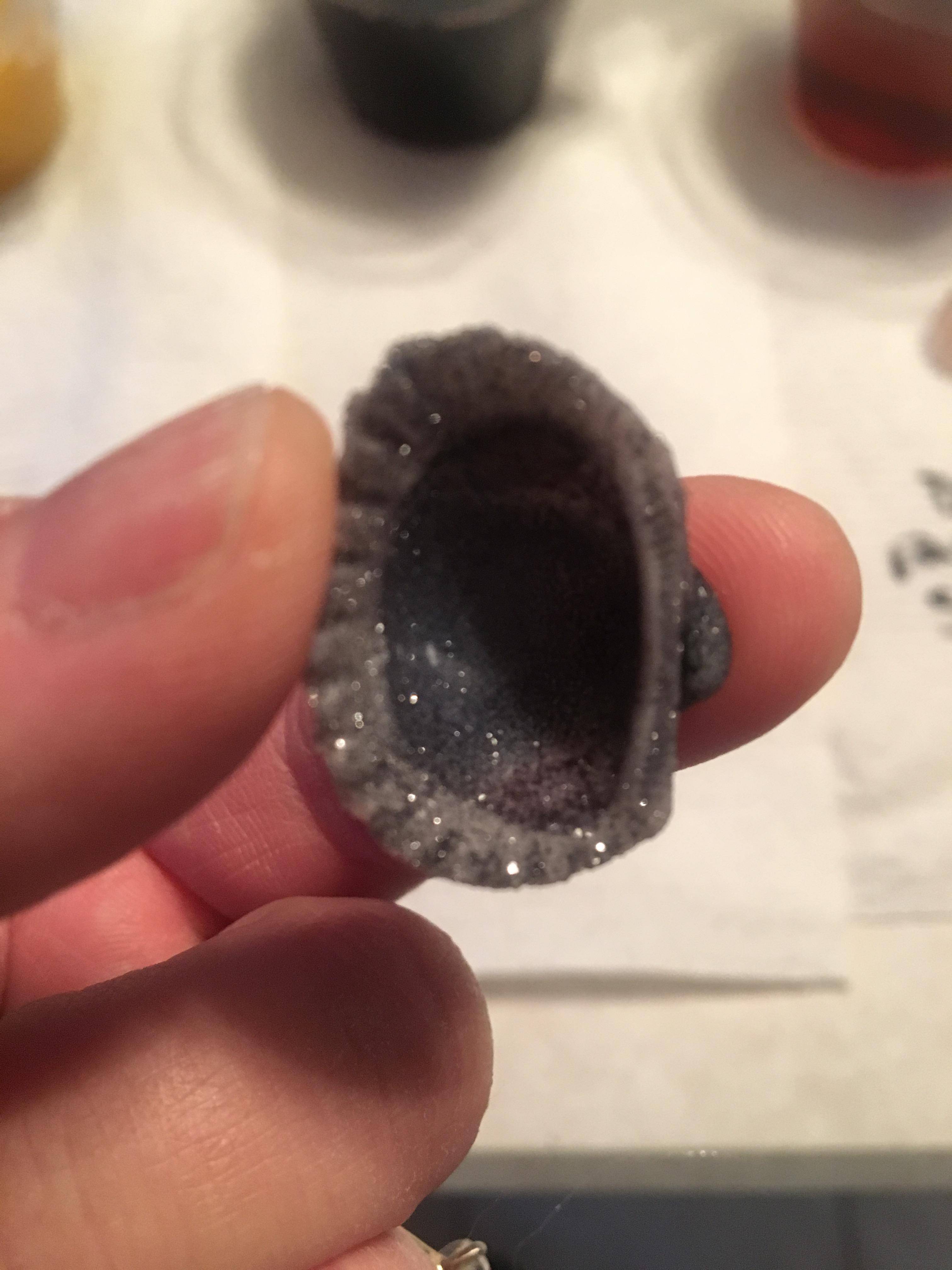 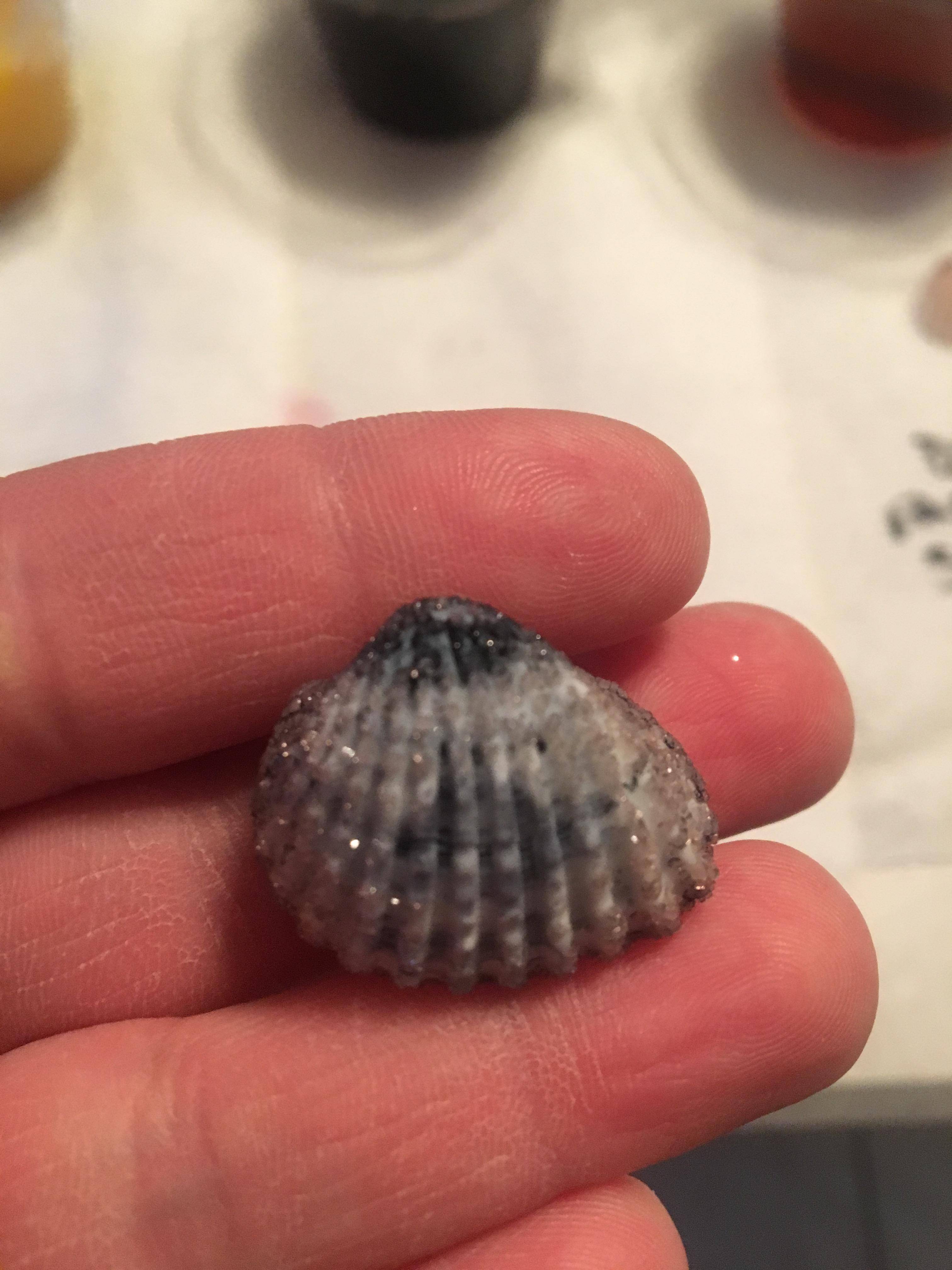 My daughter is working on a 5th grade science fair experiment. She soaked white seashells in various drinkable liquids to test the effects of those liquids on teeth (teeth are represented by seashells). We were expecting to find loss of mass and discoloration of the seashells, but we were completely surprised by the reaction observed in the grape juice seashell. The pictures attached are not great at showing what I mean, but besides the discoloration, the seashell shimmers! There seem to be crystals all over it. It appears like it is covered in glitter. Has anybody heard of such chemical reaction? I researched this, but cannot seem to find anything to explain it to my daughter. We don't know if the juice simply ate away at the outer protective layer of the seashell to expose the sparkly inside (not likely) or are we looking at a chemical reaction (more likely).

I warn you that I've virtually no knowledge of the composition of grape juice - I didn't even remember that it contained tartaric acid, for example. My admimission of my ignorance is to guard you from letting my technical vocabulary fool you into thinking that just because I might sound knowledgeable, that what I say is correct concerning grape juice and sea shells.

Calcium tartrate, when pure, is colorless (its crystals are "white"). When made from grape juice, I would expect that the crystals are colored. This would be due to impurities which co-precipitate & are incorporated into the crystal structure. I was able to find some pictures of crystals of calcium tartrate using Google which were colored (purplish red in one case, orange-red in another) and which might be consistent with what you saw. See also https://en.wikipedia.org/wiki/Tartrate.

On the other hand, grape juice contains other organic acids which might also form colored crystals. Two families in particular I am thinking about: tannins and anthrocyanins. Both are polyphenols, which means they have two or three -OH (hydroxyl) groups attached to one aromatic ring (the simplest example of an aromatic ring is benzene).

Sheen is generally not a property of a chemical compound's pure crystal. The prototypical example is the gemstone opal, which is composed of microscopic silica spheres packed into a regular array. The point here is that "sheen" is more likely due to microscopic particles included in the crystal rather than an inherent property of a pure crystal. There are exceptions to this, however.

The reason I mention the polyphenols is that they typically form very highly colored complexes (salts) with iron. Often they are colored brown, purple or black (and the that their crystals might have a sheen.) It appears to me that the shell has turned purple-black due to the polyphenols reacting with trace quantities of iron. A way to check this would be to take an iron nail (ungalvanized, unplated, uncoated) and let it rust in some grape juice and see what you get - if its just the typical orange-red rust, then there probably aren't many polyphenols present. But, note that in anaerobic (low oxygen,eg. in unmixed water) conditions, iron will rust to a black color, which will turn slowly red-brown when allowed to air dry. Wine is well known to contain tannins, which come from grape skins.

Anthrocyanins are known to change color with changes in acidity (pH). So, you could check to see if the crystals change color in water with added acid (vinegar, say) and base (ammonia, say). With supervision, Draino in water is also an option; it contains a very strong base, sodium hydroxide, but it definitely shouldn't be used by a child - it can cause severe burns to the skin and worse to the eyes. Most powdered detergents also are basic.

Grape juice contains large amounts of tartaric, malic, and citric acids. Neither of the latter two are likely to be the source of your crystals, imho. Two other experiments you could try are: 1. Add some rubbing alcohol (40% or even better 70%) to a bit of the juice. You might get some crystals (sediment). 2. Put a shell into some Cream of tartar in water. (The Cr. of T. will be more soluble with some vinegar or lemon juice added, making it more acidic). If the crystals you saw were indeed calcium tartrate, then this should give you the same thing. When I saw the picture of the black seashell, I immediately assumed tannins (and iron) were present, fwiw.