Why are tertiary alkyl halides obtained in higher yield than secondary or primary during free radical halogenation of alkanes?

Halogens ($\ce{Cl_2}$ and $\ce{Br_2}$ ) react with alkanes in the presence of ultraviolet light to form haloalkanes.This reaction is free radical substitution and gives a mixture of mono, di, or polysubstituted haloalkanes which are difficult to separate into pure components. Moreover, the yield of any one compound is low because of the formation of other compounds. For example, in case of butane, a mixture of 1-chlorobutane (28%) and 2-chlorobutane (72%) is obtained, where the secondary alkyl halide is obtained as the major product rather than the primary one. $$\ce{CH_3CH_2CH_2CH_3->[\ce{Cl_2,~UV~light}]CH_3CH_2CH_2CH_2Cl + CH3CH_2CHClCH_3}$$
In general, the ease of substitution of various hydrogen follows the sequence:
$${\rm tertiary > secondary >primary}$$

After reading through all the above statements in my book, I now have the following questions:

The reason for the ordering is that tertiary radicals have a lower energy (and are thus easier to form) than secondary radicals, which are in turn easier to form than primary radicals. This is because of a phenomenon called sigma conjugation - the weak overlap between the half filled orbital and the adjacent side group orbitals gives a slight lowering of energy. This means that it is easier to remove a hydrogen to give a tertiary radical intermediate than to give a secondary radical intermediate and so on. This is similar to Markovnikov's rule. 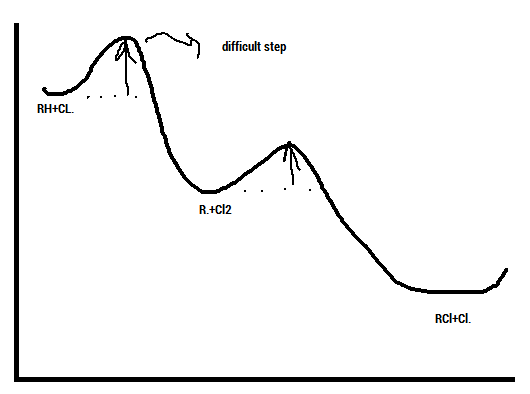 Why is fluorine and iodide not considered in case of free radical halogenation (as you can see, the first two lines of the above passage extracted from the book, mentions only chlorine and bromine)?

Iodination is reversible but it may be carried out in the presence of an oxidising agent such as $\ce{HIO3,HNO3,HgO,}$etc., which destroys the hydrogen iodide as it is formed and so drives the reaction to the right: $$\ce{CH4 +I2<=>CH3I +HI\\5HI +HIO3->3I2 +3H2O}$$ Iodines are more conviniently prepared by treating the chloro- or bromo- derivatives with $\ce{NaI}$ in methanol or acetone solution: $$\ce{RCl+NaI->[\text{acetone}]RI+NaCl}$$ This reaction is possible because $\ce{NaI}$ is soluble in methanol or acetone, whereas sodium chloride and bromide are not. This reaction is known as Finkelstein or Conant-Finkelstein reaction.

Direct Fluorination is usually explosive; special conditions are necessary for the preparation of the fluorine derivatives of the alkanes.One such example is Swarts reaction.

See carefully there's no tertiary alkylhalide possible, because no tertiary hydrogen is available. As radicals do not rearrange, the structure never changes!

To address your second question, fluorine and iodine are not considered for this reaction because the first is too reactive while the latter is too unreactive.

Fluorine will react harshly with alkanes, producing an unselective mixture of fluorocarbons. The chain propagation steps of the reaction are so exothermic that it proceeds explosively, and special measures are necessary to control the reaction (e.g. low reactant concentrations).

In contrast, iodine will react very slowly, if at all. Although the activation energy for the reaction (+151 kJ/mol) is the lowest of all halogens, the first chain propagation step (+142 kJ/mol) and the overall reaction enthalpy (+54 kJ/mol) are very endothermic, which disfavors radical iodination of alkanes (reference).

2
Why is the reactivity of primary alkyl halides with nucleophiles (SN2 mechanism) greater than secondary and tertiary alkyl halides?
2
Predicting order of nucleophilic substitution reactivity
1
Why are the secondary alpha hydrogens more acidic than primary alpha hydrogens (keto-enol tautomerization)?
8
False positive in lucas test for primary alcohol due to formation of tertiary carbocation by rearrangement?
6
Order of reactivity of substrates towards Wurtz reaction