This is the compound: 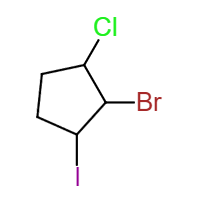 Is there any new theory that I am missing?

The preferred IUPAC name is based on the senior parent structure that has the lower locant or set of locants for substituents cited as prefixes (other than 'hydro/dehydro') to the parent structure.

The term "lowest set of locants" is defined in P-14.3.5; see Loong's answer here. As such the correct set of locants is 1,2,3, not 1,2,5 as was proposed in another answer since "1,2,3" is lower than "1,2,5". (The other answer has since been deleted.) As far as I can tell you have correctly identified this. However, the ambiguity between these two possible numbering schemes is not resolved by P-45.2.2: 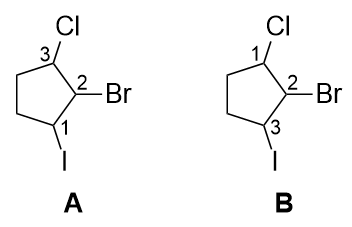 In order to decide one first needs to generate the corresponding names for both numbering schemes. Regardless of locant numbering, the three substituents are listed in alphanumerical order (rule P-14.5). Scheme A would give the name "2-bromo-3-chloro-1-iodocyclopentane", whereas Scheme B would give the name "2-bromo-1-chloro-3-iodocyclopentane", since "bromo", "chloro", and "iodo" come in that order alphabetically.

The preferred IUPAC name is based on the senior parent structure that has the lower locant or set of locants for substituents cited as prefixes to the parent structure (other than 'hydro/dehydro' prefixes) in their order of citation in the name.

As for what is missing in your train of thought: From what I understand of your question, you seem to be thinking that the prefixes must be ordered in increasing locant number i.e. the name generated is "1-X-2-Y-3-Zcyclopentane", and that the locant set must then be chosen such that X, Y, and Z come in alphabetical order. As you already noticed with this example, that is not quite a foolproof rule. The correct way to do it is the other way round: first, order the prefixes by alphabetical order, and then choose the locant set in order to minimise the locants.

Not the answer you're looking for? Browse other questions tagged organic-chemistry nomenclature halides or ask your own question.

36
IUPAC nomenclature: "Smallest sum of locants"?
4
Naming tetrahalogenated benzene
3
Is 4-methylchlorobenzene an acceptable IUPAC name for this compound?
3
How to decide at which end to start the numbering of the parent chain when the options for locant sets are the same?
0
Methyl vs halogen : order of precedence
1
How to name this compound