Which is anode and which is cathode?

A maybe (hopefully) simple question about the denotations of "anode" and "cathode". The below image is a schematic of a polymer solar cell (Source (WBM)). (The figure text is quoted as well for the sake of context).

My question is only about the naming of electrodes. Isn't it correct that

Is it a mistake on the drawing or should I re-think my understanding of the terms "anode" and "cathode"? 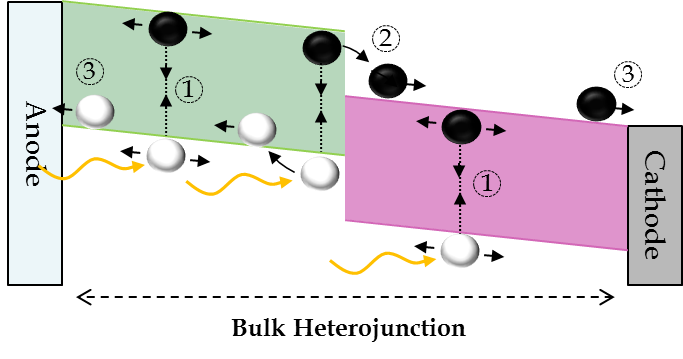 Figure 1. The working principle of the solar cell. Light enters the cell through the transparent anode, and is absorbed in the bulk heterojunction layer through generation of excitons (1). The excitons diffuse in the bulk heterojunction until they either recombine or reach a donor-acceptor interface, where they separate into electrons (black) and holes (white) (2). The electrons and holes will then move to the respective anode and cathode, through the donor and acceptor material phase (3).

If the figure is correct and I am the one being confused, then there are several other cases that seem to teach false. E.g. the following "PANIC"-remembering-rule to remember, which is cathode and which is anode (from this source, slide 8): 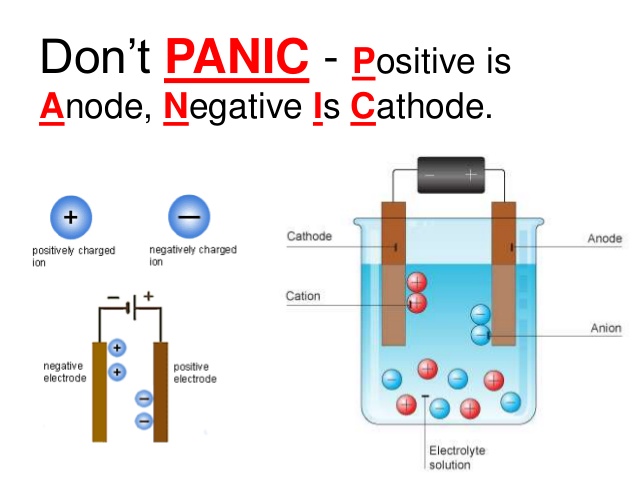 "*Negative is cathode", it says, and we are back to my question in the top: why do the electrons (black spheres) move towards the negative cathode in that schematic?

Many more diagrams agreeing with this latter one are found from a simple google search.

Regardless of the polarity, the electrode where oxidation takes place is the called the anode and therefore reduction must take place at the cathode. The electron flow from the anode to cathode is as shown in your top picture.

By way of an example, in an electrochemical cell, suppose that two beakers are connected by a salt bridge. In one beaker is a strip of zinc metal immersed in a $\ce{Zn(NO3)2}$ solution and in the other a strip of silver in $\ce{AgNO3}$ solution. The two metals are then connected by a wire and a current will flow. (The salt bridge supplies a return path so that the solutions remain electrically neutral). The redox of the Zn electrode is $-0.763$ V and that of the Ag $+0.799$ V. This means that electrons will flow from the zinc to the silver electrode. The zinc is oxidised to $\ce{Zn^{2+}}$ and the electrons are released into the metal and flow to the silver electrode through the wire. The zinc electrode is the anode and the silver the cathode.

There is no completed electronic circuit in an electrochemical cell

In an electrochemical cell, the anode is the source of electrons to the external circuit and the cathode is the sink. The circuit of charge transport gets completed by ions traveling inside the cell. A solar cell is different from an electrochemical cell in that their is no net chemical reaction. In the solar cell, electrons flow in a closed circuit - round and round in the external circuit and through the device.

Designation of anode and cathode

Unfortunately, anode and cathode are named using different conventions depending on the type of device, see this overview (and beware that the current I sometimes goes in the same direction as the electrons and sometimes not, again depending on conventions).

For the photovoltaic cell, maybe this picture helps: Before light hits the cell, anode and cathode are neither negative nor positive. Once light hits the cell, the anode becomes negative because electrons are moving toward it from the junction, and the cathode becomes positive because electrons are jumping from it into holes coming from the junction. If you then attach an external consumer of electrical work, you can predict the direction of electron flow through the external circuit.

The tricky part for the memorising is, anodes and cathodes flip the position, when the current is reversed, depending on if

The convention for the primary and secondary (rechargable) cells is to take the latter case as the power source.

My mnemotechnic trick is to remember, that

At anode is occuring anabasis (*) of electrons, upwards from the electrode, i.e. oxidation.

It means the anode is

At the cathode is occuring katabasis of electrons, downwards to the electrode, i.e. reduction.

It means the cathode is

(*) Anabasis by Xenophon, some 370 BC, "The journey upwards", about dramatic return of Greek mercenaries from Persia to Greece.

You are confused about the definition of reduction and oxidation.

Which means, the cathode is gaining electrons, while the anode is losing electrons. The illustration is absolutely correct.

I use the mnemonic OIL RIG

Oxidation -> loss of electrons (or increase in oxidation state)

Reduction - > Gain of electrons (or decrease in oxidation state)

Not the answer you're looking for? Browse other questions tagged electrochemistry redox nomenclature electrons or ask your own question.

5
Cathode + Anode + Rechargeable battery
3
Electrochemical cell polarity and electrodes
56
Positive or Negative Anode/Cathode in Electrolytic/Galvanic Cell
2
Hydrogen fuel cell - why do the H+ ions move through the electrolyte
3
Why is the cathode reaction required in a fuel cell?
2
Difference between voltaic cell in chemistry and battery in physics
1
Do ions still "conduct electricity" if a physical connection made by aqueous electrolytes between the anode and the cathode is nonexistent?
2
Observation of deflection in the Cathode ray experiment