How fast a surface oxide layer is formed on bulk chromium?

If a chromium piece is cut in half, how long would it take for an oxide layer to form on the new surface (room temperature)? i.e. is it a matter of seconds/minutes/hours/days/weeks?

The closest study I found is by G. Thurner and P.H. Holloway (1992), but I can't really tell from their results what would happen at ambient conditions: 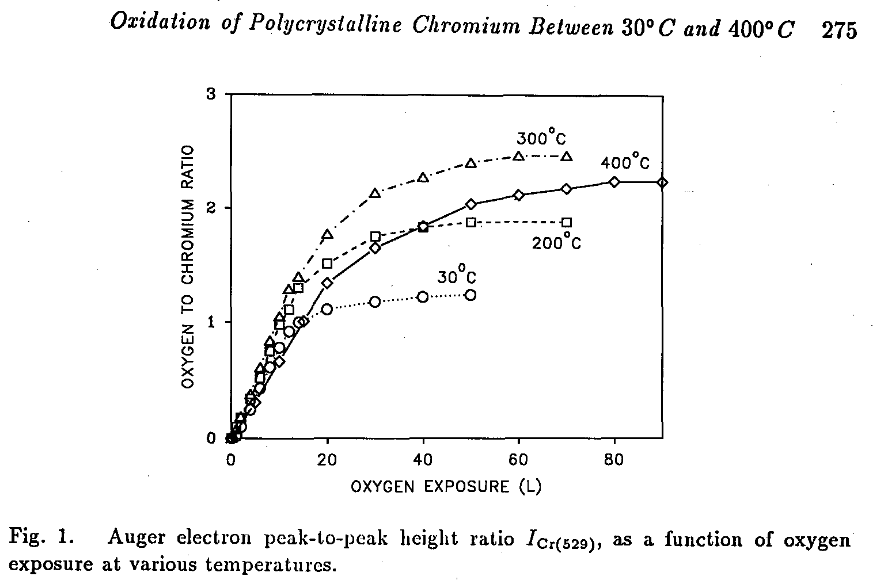 (I found several publications about high temperature oxidation, but none for surface oxidation at ambient conditions)

First, a definition of the Langmuir unit, used in the graph in the question, which is not often run across except by vacuum (particularly UHV) folks. One Langmuir is the exposure of a surface to a gas pressure of $10^{-6}$ Torr for one second. It roughly corresponds to one monolayer equivalent of gas hitting the surface. At normal atmospheric pressure, with 20% oxygen in air, 1 Langmuir of oxygen hits the surface in about 6.6 nanoseconds (yes, nanoseconds).

Another paper that could be of interest is C. Palacio et al., "AES, XPS and EELS study of the initial oxidation of polycrystalline chromium", Surface Science 182(1-2) 41-55 (1987). They see chemisorption of oxygen in the first 1-2 L, nucleation and lateral growth of oxide islands up to 10 L, and continued growth of an oxide film above 10 L.

Overall, there is not a huge difference between the two papers. By ~10 L of exposure to oxygen there is a continuous oxide on the surface at 300K. Following from the numbers in the first paragraph, that occurs in less than 100 nanoseconds. Basically, it oxidizes as it is cut.

In learning about different steels, I've picked up some information that can hopefully help you.

I have been told by metal vendors and fabricators that if you have some pure chromium, it will passivate (form a chromium oxide layer) in ambient conditions. This layer is only a few molecules thick so I would hazard a guess that within a day you should achieve >90% thickness of this chromium oxide layer.

Not the answer you're looking for? Browse other questions tagged surface-chemistry or ask your own question.

0
Does the protective layer of Aluminum oxide form on the surface of aluminium alloys (such as Al-Zr) as well?
2
How surface passivation works?
11
How to simulate surface tension?
2
How durable is a silanized surface?
2
Do bond energies differ for surface and bulk atoms in nanoparticles?
5
Is the surface of glass a fine layer of silanol?
2
How to avoid oxidation of Si using a sub nanometer layer
3
Surface Chemistry - Dipole Moment of Surfactant with Water and Phases of a Monomolecular Layer
26
Is “stainless” a bulk or a surface property of stainless steel?