Why is the attached hydrogen of 1,3-diethyl-5-(1-phenoxyethyl)benzene homotopic? 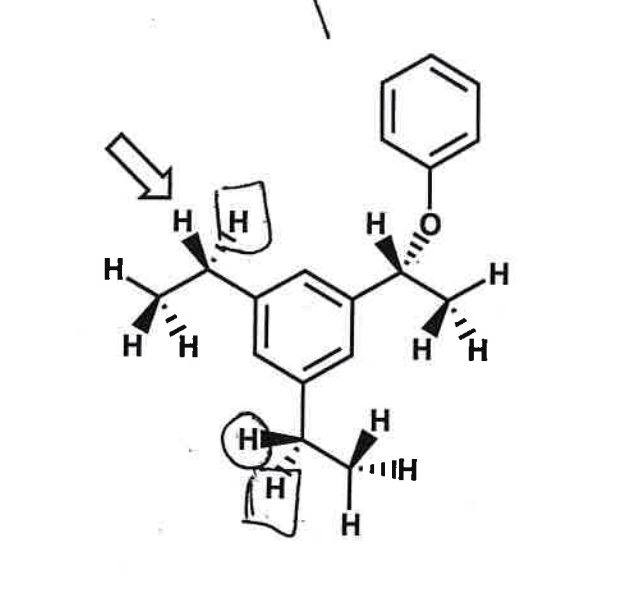 The circled hydrogen is considered homotopic with reference to the hydrogen identified by the arrow. I predicted this as they are on identical substituents but am now confused because there orientations with respect to the molecule with the benzene are different. Am I misinterpreting something about the molecular structure?

Which hydrogen is homotopic to which is rather hard to see in this compound without actually sitting down and drawing the relevant structures. Before I do this, I am going to get a few obvious points out of the way:

We have a few rotatable bonds at our disposal; I will be using the $\ce{Ph-CHXMe}$ bonds, where $\ce{X} = \ce{H, OPh}$ — i.e. I will be rotating around each carbon-carbon bond that connects a residue to the central aromatic ring. Following are the two rotation steps necessary to transform the arrow-hydrogen onto the circled hydrogen:

Scheme 1: The required rotations. The rotated bonds are shown by curly arrows; non-moving parts of the molecule are grey. The circled hydrogen (red) and the other hydrogen on the same carbon (blue) have been highlighted.

I chose to rotate both ethyl groups first and to rotate the entire benzene ring second. However, the order is not important. As we can see, the first rotation transforms the circled hydrogen behind the plane. (I need to rotate the other ethyl group, too, so that the final rotation will give me the initial product again.) The second rotation of the entire benzene ring with the two ethyl groups again puts the circled hydrogen in front of the plane.

Thus, your analysis was correct; the two hydrogens in front of the paper plane are homotopic as are the two behind it. The two hydrogens on a single carbon (red and blue in the picture) are diastereotopic as they cannot be transformed onto each other preserving the symmetry of the molecule.

5
Pseudochirality with more than two groups on one carbon atom
5
Are the hydrogen atoms of 2-methylindane homotopic, enantiotopic, diastereotopic or unrelated?
5
Identifying pentane isomers
2
How to determine whether two hydrogen are homotopic, diastereotopic, emantiotopic?
2
Can chiral atoms have same substituents but with different orientations?
9
Why are carbons of Inositol chiral centers?
1
Confusion with E/Z configuration