Effect of removing the product from equilibrium

Is the information suggested by the attached graph true? (Do $\ce{PCl3}$ and $\ce{Cl2}$ decrease by the same extent?)

For an arbitrary reaction $\ce{2A + B -> 3C}$, how will the concentrations of each substance change accordingly when say, some $\ce{C}$ is removed from the system? Will $\ce{A}$ and $\ce{B}$ still decrease by the same amount, and why? 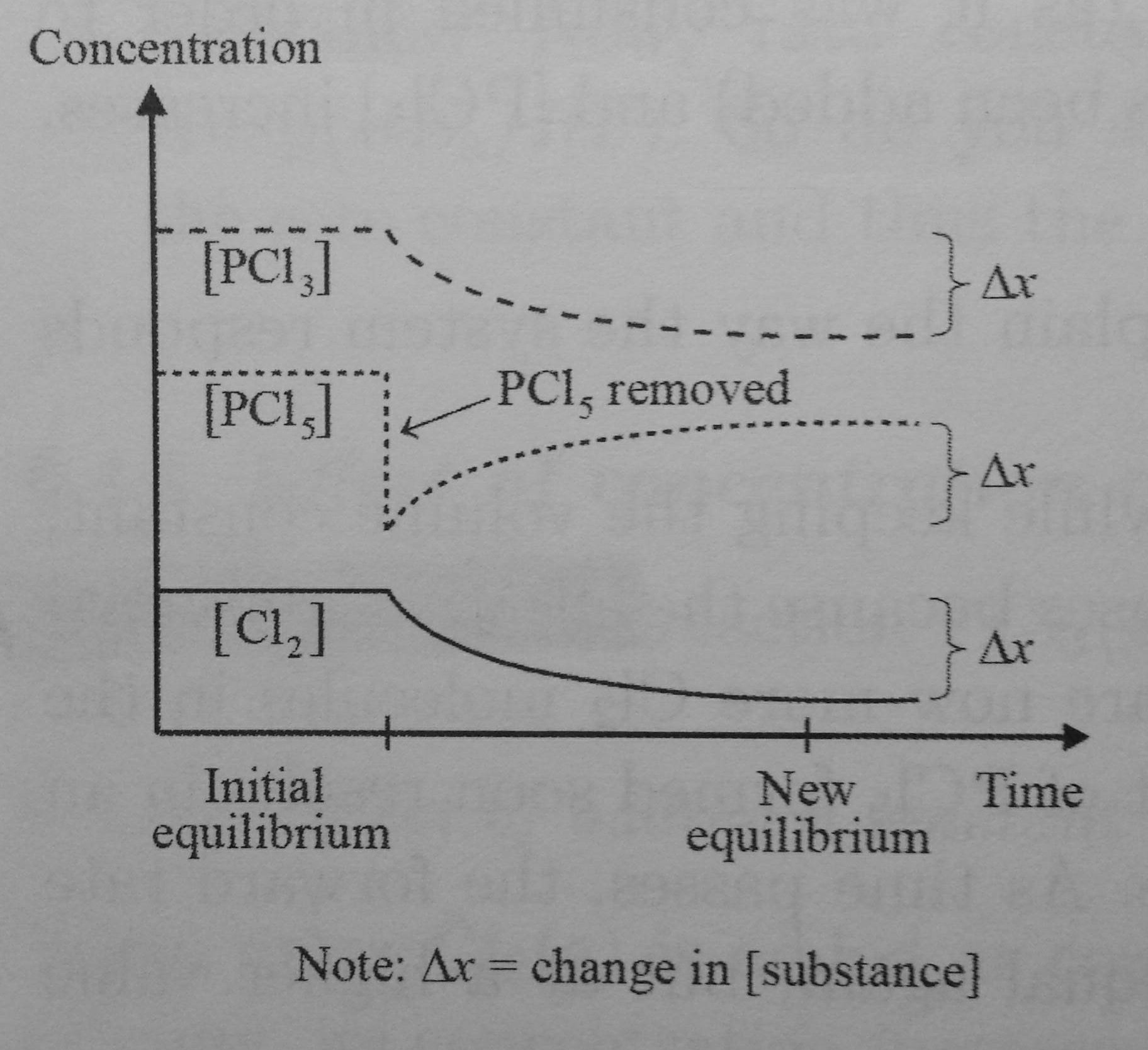 First, let’s analyse the situation the graph presents. Obviously the reaction is (just restating for clarity):

We have already removed some $\ce{PCl5}$ from the mixture and are now looking at the self-reestablishing equilibrium. Obviously, for each molecule of $\ce{PCl5}$ we create we lose one molecule of $\ce{PCl3}$ and one of $\ce{Cl2}$ — this is the information we gain from the reaction coefficients (they are all $1$). This can then be expanded to the amount of substance reacting, namely $$\Delta n(\ce{PCl5}) = -\Delta n (\ce{PCl3}) = -\Delta n(\ce{Cl2})\tag{2}$$

Since we can assume the volume $V$ to be constant, we see that concentration and amount are simply related by a constant factor; thus any differences in concentration will be analogous to differences in amount. Therefore, the labelled $\Delta x$ in the graph are indeed all identical as the represent the same concentration difference and thus the same difference in amount; and we have shown in equations $(1)$ and $(2)$ that the amounts are identical.

What about a case such as your hypothetical following case:

Therefore the relationship is:

For your example reaction (2A + B -> 3C), the concentration of A and B will not change by the same amount. If you removed 3 mols of C, you would consume 2 mols of A and 1 mol of B to replace the mols of C removed. This can be generalized to say that you will always need to use twice as much of A as you do B to produce some C, therefore the concentration of A will decrease faster than B as you remove the product, C, and shift the equilibrium towards the product side.

The graph pertaining to the phosphorus trichloride and phosphorus pentachloride equilibrium shows both reactants reducing by the same amount because both reactants are consumed in a 1 to 1 ratio to produce the product. For that reaction, the graph properly represents the concentration profiles.

Not the answer you're looking for? Browse other questions tagged inorganic-chemistry equilibrium or ask your own question.

2
Increase in equilibrium pressure when removing products
0
What is the effect of adding HCl on a certain solution at equilibrium?
0
Effect of increasing nitrogen concentration in the synthesis of ammonia
3
The effect of temperature on equilibrium
3
Why does the addition of PCl5 increase the rate of dissociation of PCl5?
0
What happens when chemical equilibrium is restored after being disturbed?