Why do puffed rice stick to wet hands? 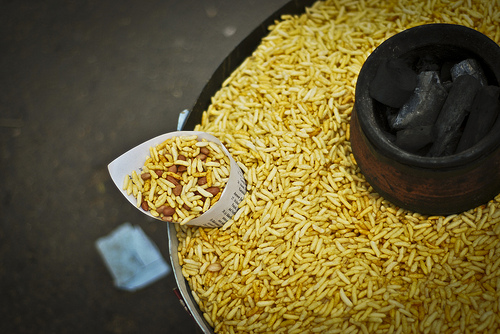 My mom gave puffed rice to eat, I had quite wet hands. I saw that, each puffed rice pieces started hanging to the hand, when I brought my hand in contact with them. I thought about electrostatics initially to be the cause. Actually, the electrostatics usually deals with rough surfaces. Here due to hand being wet, it has got smooth surface. Then, what might be reason? I started thinking, suddenly I thought it to be because of hydrophillic nature of kadale puri (puffed rice). Is it really because of hydrophillic nature of puffed rice?

This thesis, (Texture and Hydration of Expanded Rice, Clive Norton, September 1998), has a vast amount of information on rice, including puffed rice.

Rice is mostly starch, which when heated is gelatinised. This causes "the breaking of hydrogen bonds between poly-α-1,4-glucan chains, leading to loss of crystallinity" allowing those hydrogen bonding sites to absorb more water. The loss of crstallinity also leads to air pockets making puffed rice sponge like. The starches become "interspersed with gas pockets" which are filled by water through capillary action.

So, puffing makes the starch more hydrophillic, exposing hydrogen bonding sites, and the air pockets act as capillaries. The puffing also increases the ratio of surface area to weight. These factors cause the rice to be liftable with a "water chain".

Hydrophilic surface and capillary action is sertainly part of the answer together with the surface tension of water trying to minimize its surface area. But another part is probably the very low weight of puffed rice! That makes the effect of the beforementioned forces more noticeable. If the rice grains would be heavier (denser) you would probably not notice the same stickyness.

Not the answer you're looking for? Browse other questions tagged physical-chemistry everyday-chemistry water bond home-experiment or ask your own question.

4
Why do frying pans stick less with heat?
16
Why is water wet and fire hot?
4
Why does pool chlorine smell only when wet?
2
Why does rice become sticky after cooking?
11
Why does paper crumble on getting wet?
8
Phenol smell from hands