I have a simple question about the Linear Combination of Atomic Orbitals (LCAO):

When we talk about basis sets, do we mean here the coefficients or the atomic functions? 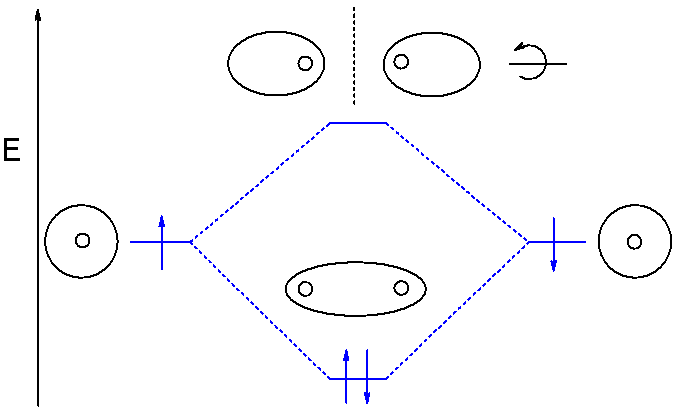 The lower energy MO, the bonding one, will be (excluding normalization):

and the higher energy MO, the antibonding one, will be (excluding normalization):

Since you tagged this with computational-chemistry, I assume you also want to know about basis sets in computational chemistry. Conceptually, they are identical to LCAO-MO bases, but what may be confusing is that each atomic orbital itself may be composed of multiple functions (called primitive functions), rather than just the single function for each AO as seen above. This leads to another set of coefficients, called contraction coefficients, describing how the primitive functions are linearly combined to form a contracted function.

An "implementation" detail is that the functional form of AOs is usually Gaussian functions, which have a parameter in the exponent (here, $\alpha$):

This means that to fully define an atomic orbital basis composed of contracted Gaussian-type orbitals (CGTOs), one needs both the contraction coefficients and exponents. They usually look like the following. For each angular momentum type, there may be one or more contracted functions, each composed of one or more primitives. For example, in the hydrogen definition below, there are 2 functions to describe s orbitals, one of which has three primitives and the other is not contracted. The contraction coefficients are in the first column and the exponents in the second column.

Short answer: The set of atomic orbitals $\lbrace\Phi\rbrace$ is the basis set.

Long answer: One can get confused because several primitive functions can be contracted into an atomic orbital, which is done by - wait for it - linear combination. The reason for contraction when applied to Gaussian functions is that Gaussians do not exhibit a cusp and thus describe the near-nucleus region badly. This also shows in the total energy. Therefore, several primitive Gaussians can be combined to form one atomic orbital, which also saves computational time because degrees of freedom are given up. (They are sometimes reintroduced by uncontracting the basis set, which can be sensible for the calculation of nucleus-related properties such as NMR shifts.) However, since the atomic orbitals are then characterized by several exponents and contraction coefficients, coefficients are also part of a basis set.

15
Why are basis sets needed?