The exact nature of a ligand exchange mechanism is something that requires computations, and physical chemistry to determine, and you should look at (1) to read more about this. Really, the mechanisms are part of a continuum:

Once the ligand is fully displaced, it is no longer part of the inner sphere of coordination, so the "'previous ligand" is no longer bound to the complex, but there exist many ligand exchange mechanisms that involve transient intermediate in which both the leaving and the incoming ligand are bound to the central atom. All associative mechanisms will have such an intermediate, while dissociative and interchange mechanisms will not. Another important example is the formation of a preassociation complex, in which "rapid equilibrium occurs between the incoming ligand and the 6-coordinate reactant to form an ion pair" (1) (or a neutral preassociation complex with strong dipole-dipole interactions, depending on oxidation states). In the case of a preassociation complex, the outgoing ligand is no longer in the inner sphere of coordination, but it is still "bound" to the complex, albeit through weaker noncovalent interactions. Such a reaction has equilibrium like this:

Another important concept is that the driving force for individual ligand dissociations and associations involved in catalytic cycles often implicates the driving force of the overall cycle. In catalytic reactions, the rate of ligand dissociation or association is not dependent not on the thermodynamics/kinetics of the individual reaction, but instead on the step in the cycle with the highest activation energy. This step is known as the turnover limiting step (2). In a catalytic cycle, all equilibria have the same rate. "On a circular track, on average the same number of trains must pass each point per unit time." (2) For example; in this catalytic alkene hydrogenation, the turnover limiting step is the dissociation of the phosphine from Wilkinson's catalyst (3), so this is the step that determines the turnover frequency (TOF). The rate of association of the ethylene ligand later on is driven by the cycle's overall TOF, so such a ligand association would be indirectly driven by a different step in the cycle. If the final step of the cycle is irreversible, the substrate release might also be a thermodynamic driving force. 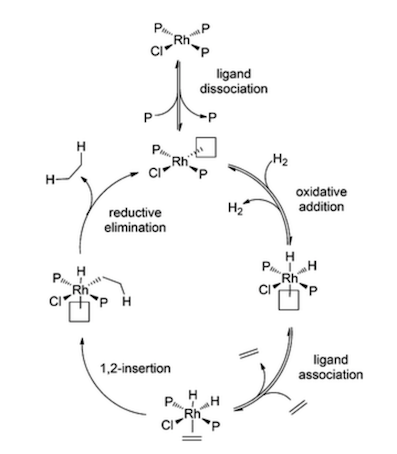 These are just some of the many possible answers to your questions.

Ligand bonds are labile. A ligand isn't welded to the complex. Remember that it is an equilibrium.

Not the answer you're looking for? Browse other questions tagged coordination-compounds transition-metals or ask your own question.

2
Heating CrCl3(bpy)3 — isomerism and ligand exchange
3
Why does Fe(CO)₄ adopt a tetrahedral, as opposed to square planar, geometry?
20
Why is ligand substitution only partial with copper(II) ions and ammonia?
1
Are all complexes with a polydentate ligand examples of chelation?
3
Which complexes are stable: ammine complexes or carbonyl complexes?
3
Why does the nature and oxidation state of a central metal affect field split?
3
Why is carbon monoxide a monodentate ligand