Last year, I came across a quite puzzling article, in which the authors claim to have found a photophysical explanation for aggregation induced emission (doi:10.1038/nchem.2612). The model proposed implied that the lowest-lying excited state ($\ce{S1}$) was a non-emissive ("dark") state, whereas $\ce{S2}$ (or $\ce{S3}$) was emissive, and depending on the solvent, the molecule could be more or less emissive.

They claim to prove their model by observing the "dark state", and among other concerns, one point that particularly retained my attention was that one of their proofs was a CD spectrum (supporting information page 43) of this molecule: 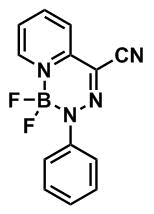 Now, simply put, I don't understand anything about how it is possible. To precise my trouble, this can be broken into different subquestions (please feel free to answer partially if you wish).

Am I missing something very important concerning chirality, or CD spectroscopy?

On the origin of chirality, you should read something about atropoisomerism. This sort of chirality arises due to a hindered rotation around a chiral axis. It is most notably encountered in biaryls, because by introducing substituents you can make rotation more difficult and observe a CD. However, it is also present in very simple molecules. Think about H2O2: every conformation where the dihedral angle is between 0° and 90° is chiral. Probably your teacher didn't point this out when explaining butane conformations, but gauche conformers exist in enantiomeric forms. The problem with these small molecules is that to freeze rotation you should basically go to very low temperatures, and then separate the enantiomers. You would observe CD. If you can do that, you got material for a pretty awesome paper in my opinion!

In this case, think about rotating the phenyl ring around the N-Ph bond. Draw the structures, and you will notice that they are chiral. The claim of the authors is that in a high viscosity solvent this rotation is hindered at room temperature, thus you will observe CD (see more on pg. 46 of the Supp. Info). Concerning the racemic mixture, I'd say you are right. It is not clear to me why they see CD without separating the enantiomers, or maybe they did but they didn't explain it thoroughly. They refer to some previous work, so maybe you could find more details in other papers.

Why is the maximum band so high? High with respect to what? 150mdeg really doesn't mean anything if you don't have the concentration and cell length and you can't work out the delta epsilon and the g-factor. CD people never use mdeg because it is not an absolute unit. The authors do not report concentration and cell path, so you can't really say whether it is strong or not, also because absorbance is reported in arbitrary units, so you can't really work out the g-factor. Clearly, they're not CD people, they use it as tool in their research, so the information they provide is not really helpful to answer this question.

Concerning the signals, have a look at figure 64 in the Supp. Info. Think about spectra as a series of lines to which you apply some lineshape function (usually Gaussian or Lorentzian). Now, two isolated bands are exactly superimposable if they have the same intensity and the same broadening. If they are not superimposable, one of these two things is not right, or the bands are not isolated. Since you are speaking about two different spectra, you can always normalise them to the same intensity. Additionally, they are recorded in the same conditions (possibly simultaneously), so there is really no reason why the broadening should be different. The only other possiblity is that there is more than one transition under that signal. The "dark state" means basically that, in UV such state has a low absorption because of some reason. However, some transition that is dark in UV can have a pretty significant CD signal, because maybe it is only magnetically allowed (think about the n-pi* transition in carbonyl groups, or some charge-transfer state).

I tried my best, however the most interesting point (why do they see CD) still remains obscure to me, mostly because it's weekend and I am too lazy to read the paper! If I remember, I'll maybe read it next week.

Edit: One thing that I didn't mention is that the sp3 N atom is chiral as well, so actually here, when you put in the axial chirality, you're really speaking about diastereoisomers, if you can fix the chirality of the N atom. This happens in very particular cases (see Cinchona alkaloyds), but since we're in a high viscosity medium, who knows, this might be the case, and explain why only one of the two possible configurations of the chiral axis is preferred.

Not the answer you're looking for? Browse other questions tagged physical-chemistry spectroscopy chirality or ask your own question.

22
Is there a simple way to get the circular dichroism of a molecule from its structure?
4
What is the approximate lifetime of an SN2 transition state complex?
1
How can I determine/quantify the presence of boron nitride on a metal surface?
0
Uniform circular motion of electrons?
6
How to calculate the number of prochiral carbon atoms in a complex organic molecule?
22
Mechanistic Explanation of Circular Dichroism
12
What is the difference between quantities reported as optical rotation and circular birefringence?