Can someone tell me why β-sitosterol has the beta prefix? What is it denoting? When comparing its structure to other similar phytosterols I see no need for it.

$\alpha$ means trans to the reference substituent, $\beta$ means cis (= on the same face of the molecule).

Why don't then campesterol and stigmasterol also have the same designation?

To my knowledge, both compounds are natural products for which only the 3-$\beta$ isomer is known. It is therefore not necessary to use the $\alpha$ and $\beta$ prefixes here.

For sitosterol, on the other hand, both isomers are known and thus need a unique identifier.

While one might think that β-sitosterol is an epimer of α-sitosterol, differing by configuration at C-3 (with $\ce{-OH}$ group), it does not seem to be the case.

There are various products and their isomers of phytosterol sitosterol biosynthesis, and their trivial naming seems to be somewhat rudimentary.

All of the sitosterols are 3β alcohols. The Greek letter (beta) designation in ‘β-sitosterol’ seem to be for more general, non-systematic isomers designation. In the field of natural compounds, it has historical reasons – a compound was isolated, described and named, and later was found that it in fact is a mixture of different isomers. (E.g. “α-caryophyllene” and “β-caryophyllene” do even have different number of cycles).

Sitosterols mentioned the Merck Index (14th ed.) are as follows ("natural product" IUPAC name according to last steroid nomenclature shown as well, might slightly differ from those from the M.I.). 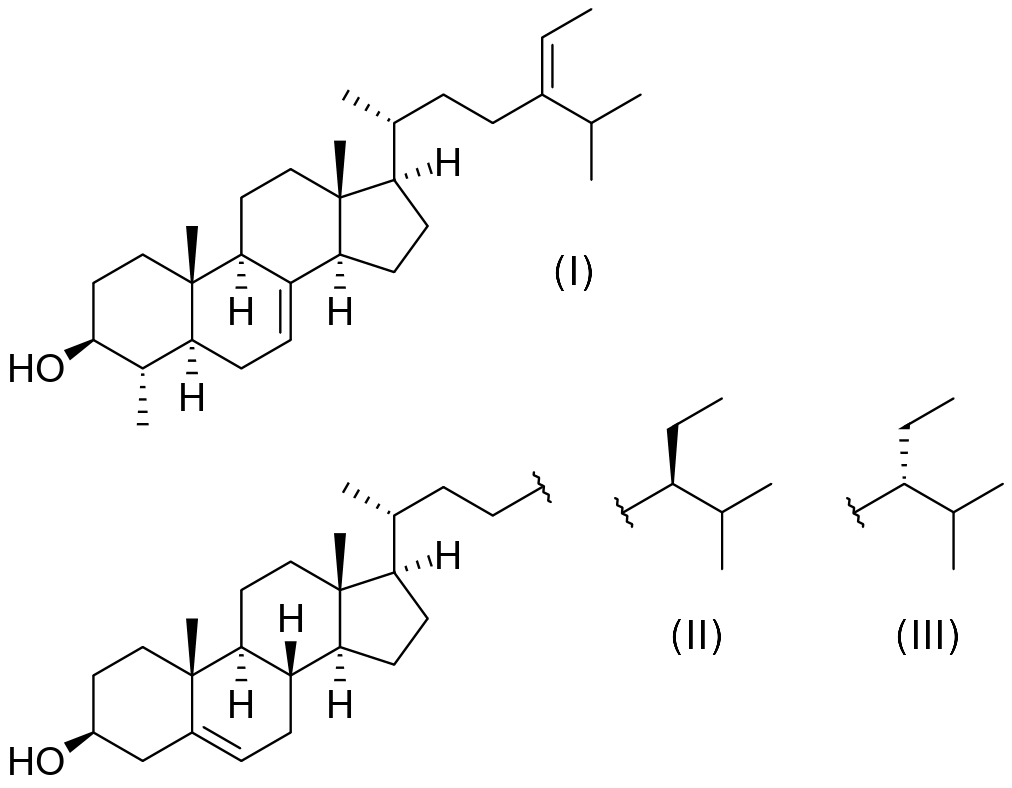 So, β- and γ- sitosterols (II, III) are diastereomers, epimers at C-24 (those differently named parent structure names stigmastane and poriferastane are in fact just (24R)-24-ethylcholestane and (24S)-24-ethylcholestane, respectively; these ethyl carbons are nowadays numbered 241 and 242 instead of older 28, 29). α1-Sitosterol (I) has the double bond not at C-5 but at C-7, additional methyl at C-4, and additional double bond at C-24 (ethylidene instead of ethyl). (And I guess that that ‘1’ subscript might be because of E/Z isomerism if this double bond.)

Not the answer you're looking for? Browse other questions tagged nomenclature stereochemistry steroids or ask your own question.