Does borax do anything more for "boosting" detergent than adding active oxygen would?

Borax, $\ce{Na2B4O7}$, is often marketed as a "laundry booster" under the brand "20 Mule Team Borax". The unit crystal of borax can be seen below. 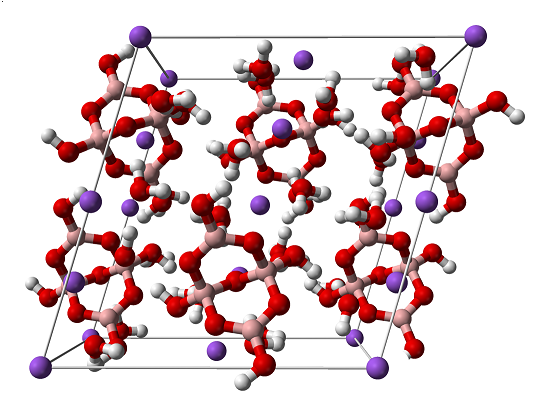 Other laundry products in the past have added sodium perborate (which can be produced from borax, hydrogen peroxide, and sodium hydroxide) as a bleaching additive. The "peroxide" portion can readily be seen below.

Through what mechanism does the plain borax "boost" the detergent? Would it be more effective to throw some weak peroxide and a small amount of base into the laundry to form the perborate instead of using plain borax?

Borax was used as a "builder" in washing formulations long before perborate was used as a bleach. "Builder" is the terminology for additives which reduce the influence of water hardness. Other examples of builders include trisodium phosphate, soda, polyphosphates (like Graham's salt) or today most often aluminosilicate ion exchangers (Phosphates are more or less forbidden nowadays because of eutrophication of rivers and seas).

Not the answer you're looking for? Browse other questions tagged inorganic-chemistry everyday-chemistry surfactants or ask your own question.

7
Why is the ionization energy of sulfur anion more than that of oxygen anion?
14
How does chlorine form more than 1 bond?
14
Why does microwave heat up things so much more quickly than visible light?
4
Why would permeability for krypton be higher than argon?
1
Why does shower gel / shampoo foam a lot more on hairy than non-hairy body parts?
38
Why does potassium react more violently with water than lithium?
4
Does hydrogen peroxide - urea become more active when illuminated?
7
Why does ozone have higher entropy than oxygen?
5
Why is oxygen more stable than oxygen dication?