Many transition metal alkoxides are seen in chemistry, for instance those of $\ce{Ti, Sn}$ and $\ce{Al}$, and in particular one of those of aluminium has its own role in the MPV reduction reaction.

I was wondering: how stable these $\ce{M(OR)_n}$ structures are?

To simplify the question:

Alkali metal, main group, and transition metal (TM) alkoxides all have significantly different chemistry. Early- and Late-TM alkoxides also have different behaviour, so we should split this family into at least four categories. All of them are basic and will decompose via hydrolysis if dissolved in water; however, this type of chemistry is not usually carried out in presence of water.

In TM chemistry, alkoxide or phenoxide are mostly used as ancillary ligands, meaning they do not usually participate in the chemistry. Although they are liable to be hydrolyzed under protic conditions, alkoxides are actually known for being especially stable TM ligands because they do not undergo β-hydride elimination (BHE) (1), which is one of the most common decomposition pathways for TM alkyls. For instance; you often cannot make a stable t-butyl TM complex because the β-hydride will be transferred to the transition metal, liberating 2-methylpropene unless the metal is totally coordinatively saturated. An important example of a BHE-stable TM t-butoxide is the following Mo(IV) Schrock catalyst, which is stable: 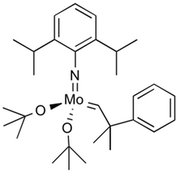 It should be noted, though, that the Schrock catalyst doesn't actually have any β-hydrides. Later, I'll show an example of a TM-alkoxide that does.

An important feature of alkoxides as ligands for TM chemistry is that they are electronically malleable. Since an alkoxide has 5 electrons it can behave either as an σ-donating X ligand or as a σ- and π-donating LX ligand (and formally as L2X). Presumably, this electronic malleability has something to do with their stability to BHE. An alkoxide's π-donor character might stop the metal center from liberating a coordination site to accept the β-hydride. For more information on BHE-stability, see (2), as cited by Schrock in (1).

Since early-TMs are more electropositive, the bonding character of their alkoxides is more ionic, although not to the same degree as that of alkali metal alkoxides. Alkoxides are very good bridging ligands, and if they are not sufficiently bulky, alkoxide complexes often polymerize. With a sufficiently bulky monomeric early-TM alkoxide, the main decomposition pathway is formation of the oxo complex. For example; the decomposition of a metal diolate shown in the next image was observed by Gable et al. (3) Their Hartree-Frock calculations implicated an empty metal MO at rhenium in the M=O bond formation, as shown in the MO picture in the next image. 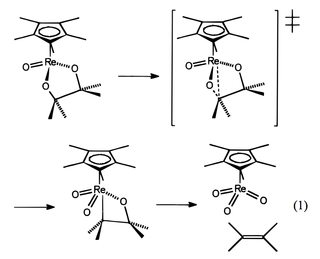 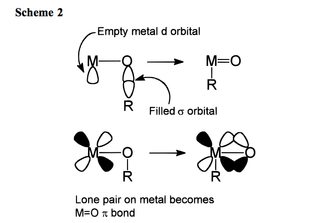 Late-TM alkoxides are expected to have weaker M-O bonds; and not as many have been isolated, but a new study (4) has examined these M-X (where X = O, N) bonds.

Ta2OEt10 is a stable TM-alkoxide with true β-hydrides, bridging oxygens, and it's readily hydrolyzed when exposed to protons. It can be synthesized via salt metathesis with sodium ethoxide, a reaction that has equilibirium lying in the opposite direction of the alkali metal alkoxide formation you proposed.

In MPV reduction (and OPP oxidation), Al(O-i-Pr)3 is usually used as the catalyst. Aluminium is a metal, but it is a main group metal, and its chemistry is somewhere between that of boron, a semimetal, and that of early transition metals, except, of course, that it does not have a partially filled d shell. Al(O-i-Pr)3 is an electron deficient Lewis acid, comparable in chemistry to boronate esters, but much more reactive. The proposed mechanism for MPV/OPP [R]/[O] goes something like this:

It is a true catalytic reaction, so the Al(O-i-Pr)3 is indeed regenerated, but I don't know if it's a routine part of the procedure to recover it. Al(OR)3's are not, however, soluble in IPA, but alcohols and ketones usually are, so you could probably precipitate Al(O-i-Pr)3 in IPA providing you have a way to seperate your ketone and your secondary alcohol afterwards.

Interestingly, Ti(O-i-Pr)4, is analogous to Al(OR)3, but its reactivity totally different, since titanium is a true TM and not just a Lewis acid main group metal like aluminium. Ti(O-i-Pr)4 is the catalyst for sharpless epoxidation, so this might be a good reaction to look at as an example of early-TM alkoxide reactivity.

Not the answer you're looking for? Browse other questions tagged organic-chemistry catalysis or ask your own question.

14
How does the choice of metal (oxide) catalyst affect the range of unsaturated compounds that can be hydrogenated?
4
Why are thiolates more nucleophilic than alkoxides?
2
Stability and resonance structures
0
Polarity and stability
6
Why can alkoxides leave in the E1cb mechanism?