This paper was published in 1976. Is there a newer compilation with new data?

For covalent radii, it's clear that one can fit experimental and theoretical interatomic distance r(A-B) to a sum of two covalent radii with systematic accuracy. Notably, Pyykkö defines not only single-bond but double-bond and triple-bond radii for almost all elements.

So what about ionic radii?

The Liu, Schwartz, and Li point out the competing problems with ionic radii:

Since “bonded atoms” are evidently neither rigid nor spherical, quantum computational chemists apply “valence multiple zeta and polarized” basis sets in their molecular calculations. Conversely, X-ray ED researchers use the procrystal model of independent rigid spherical atoms for starting and screening purposes in their software for the processing and analysis of the observed diffraction data.

In other words, we like to consider atoms as having consistent, rigid spherical shapes. For ionic compounds, that's hard to determine, because of charge transfer. By definition, $\ce{A+B-}$ indicates cation $\ce{A+}$ has given electron density to $\ce{B-}$ .. but how much? Is there any covalent character and shared electron density? How do you divide?

… provided that the A–B bond is not too ionic, or the coordination numbers of the two atoms too different from the original input data, used in the fit.

In short, covalent radii are easy to define because most of the electron density is shared and covalent bonds are thus fairly predictable. In contrast, almost no compound is purely ionic so it's hard to perform the division for ionic species.

Here are two examples from Liu, Schwartz, and Li: 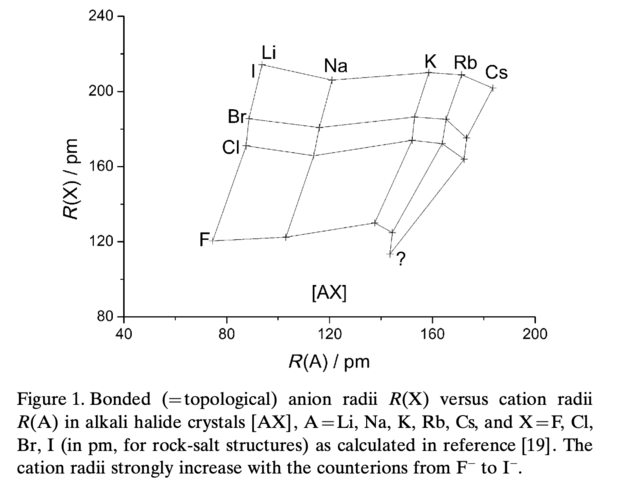 Note that there's no "vertical" or "horizontal" line for well-defined anion or cation radii. Maybe you can come up with a correction based on electronegativity difference .. but the cation radii particularly depend on the anion. 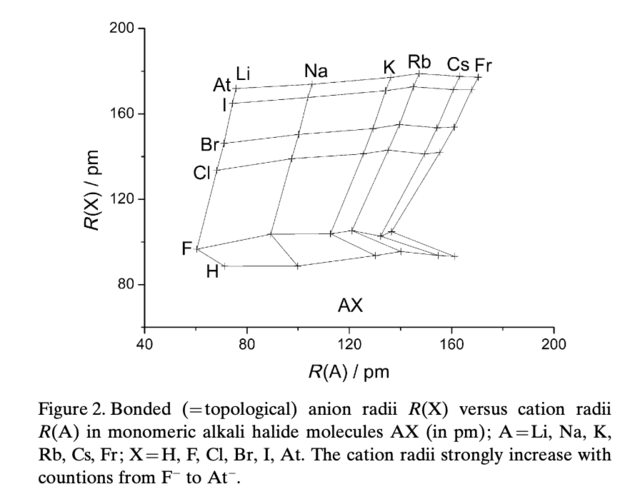 It makes some sense. It's difficult to rigorously know how much charge transfers from anion to cation (vs. shared), which is why calculation methods define multiple algorithms to determine it. (Atomic partial charges are something of an eternal debate.)

I wouldn't be surprised to find someone creating a correction using electronegativity differences or covalent character. And it's possible someone will sweep this away with a compelling article - that's the point of science. But it won't be easy, because we expect ionic radii to serve a lot of different purposes.

Not the answer you're looking for? Browse other questions tagged reference-request atomic-radius or ask your own question.

19
Is KF the most ionic compound?