Why does the reduction of naphthalene with nickel/hydrogen lead to trans-decalin?

I learned in high school that catalytic hydrogenations are always syn. Why is this inconsistent with what I learned? 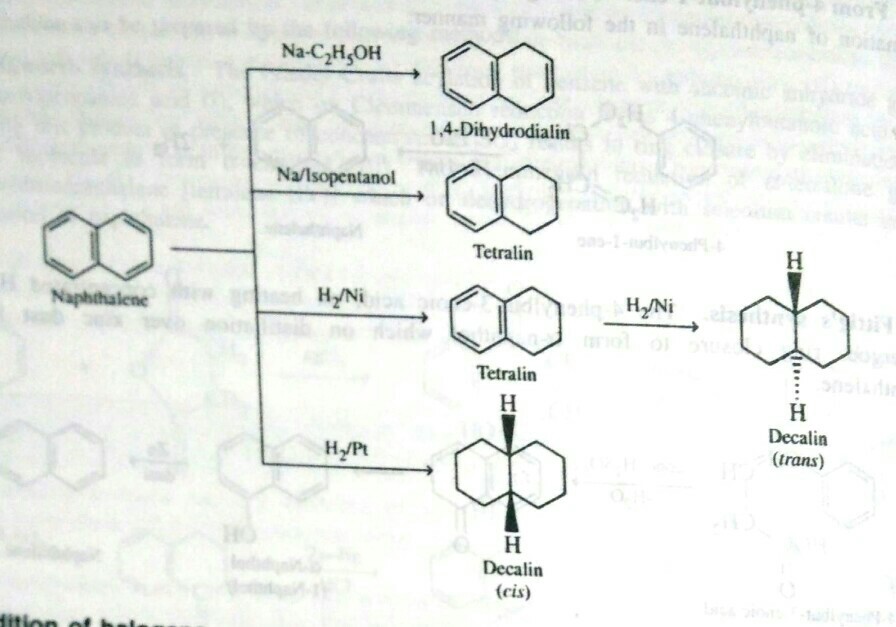 I think to understand heterogenious hydrogenation you need to understand homogenious hydrogenation of metals by Wilkinson's cataylst and hydroformylation of alkenes by a mixture of hydrogen and carbon monoxide using a cobalt carbonyl cataylst. If we consider for a moment the reaction of an acetylene with a complex such as RuHCl(CO)(PPh3)2. Then what will happen is that the acetylene will bond to the vaccent site on the ruthenium to form a pi complex. 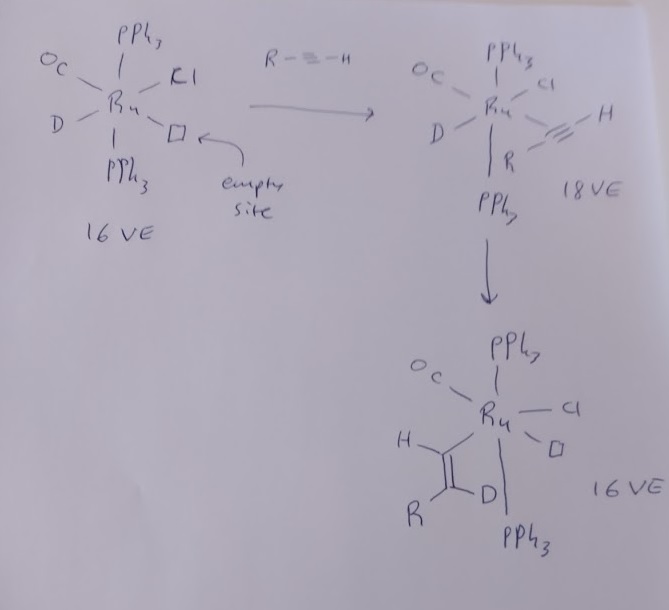 Next a rearrangement known as an insertion reaction will occur which will convet the acetylene into a vinyl group. The metal and the hydrogen which was originally on the metal will be attached to the alkene such that they will be cis to each other. This is the basis of why the hydrogenation of an alkyne normally gives the cis isomer with things like partly poisoned palladium.

If we consider for a moment the reaction in the oxo process then we have a hydrogenation with a little bit added onto it. Here is the cycle for cobalt. 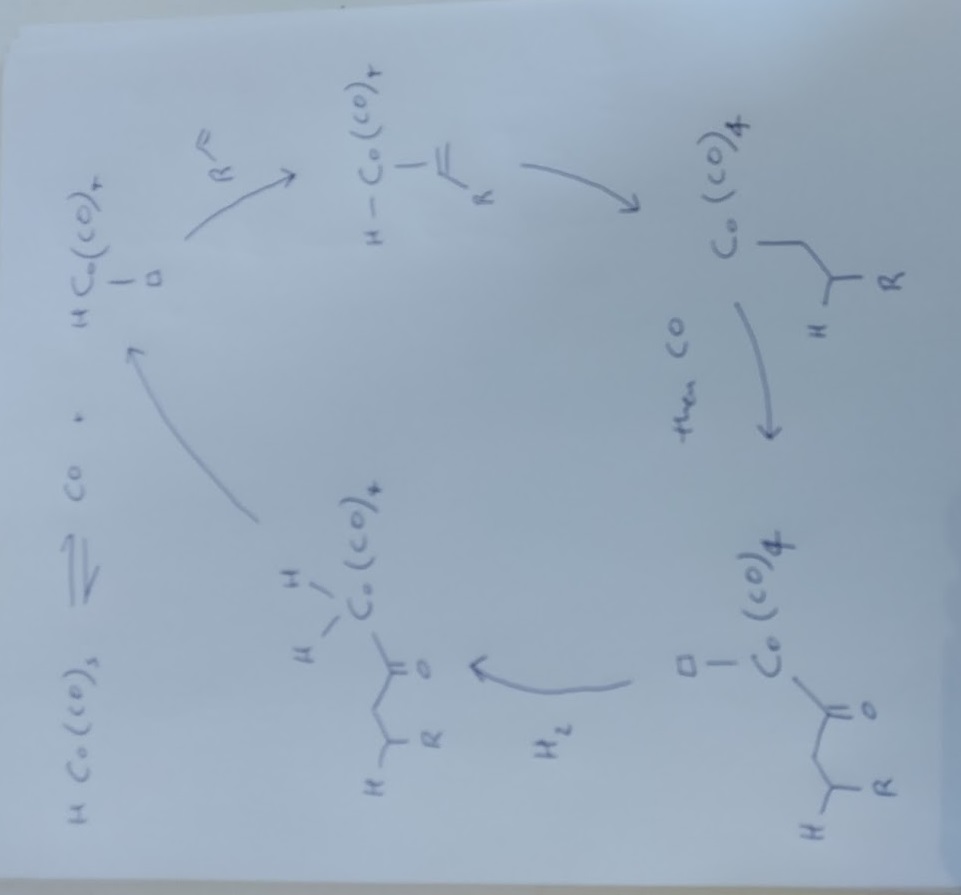 The hydrogenation cycle for Wilkinson's cataylst is very similar, you are likely to be thinking of the same sort of thing occuring on the nickel surface. Based on what we know about the chemistry of acetylenes with hydride complexes we can feel confident that an isolated alkene or acetylene will undergo cis hydrogenation. Please see the following picture. What will happen with your substrate is that the very unreactive benzene ring will hydrogenate once to form a very reactive 1,3-diene which will hydrogenate very quickly. 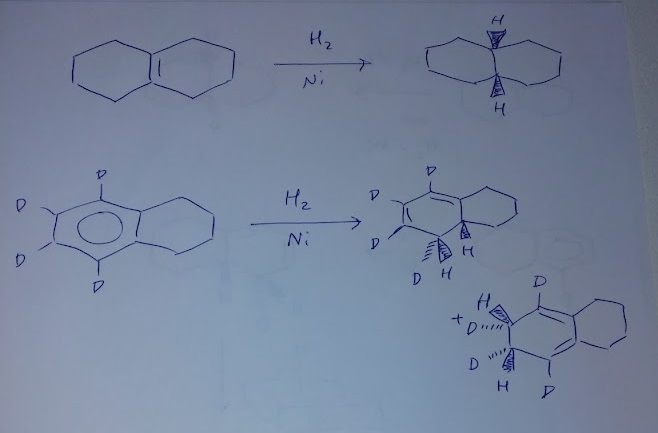 A lot of the selectivity for hydroformylation (linear vs branched product) relates to the energies of the alkyl complexes which exist in part of the cycle.

There are three homogenous hydrogenation mechanisms which exist but the one for Wilkinson's cataylst is the most common and it is the closest to what happens on a nickel or palladium surface. 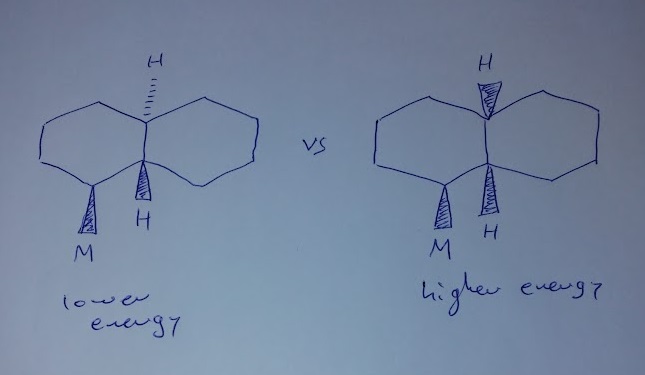 The lower energy one will be the main one in the reaction mixture. We need to be careful as the platinum gave the other product. The problem is that when we change from a first row to third row transition metal is the bond energies change. It is possible for the rate determining step to be different even if the catatyltic cycle looks the same. Consider the Monsanto process for the carbonylation of methanol vs the iridium process for the same reaction (even the same substrates) which BP invented later. There the RDS is a different step in the cycle.

I hope that I am not too heavy going, you have just had the associate prof level of answer for the problem.

Not the answer you're looking for? Browse other questions tagged organic-chemistry reaction-mechanism redox aromatic-compounds transition-metals or ask your own question.

8
Why does Birch reduction of naphthalene with isoamyl alcohol form tetralin instead of 1,4-dihydrodialin (as formed with C2H5OH)?

5
Stereoselective enolate formation with different bases: Does the addition of a base NR3 to a ketone affords the cis or the trans enolate?
5
Why do the halogenations of benzene and toluene lead to different products?
5
What is the origin of the names P-1 and P-2 of nickel boride catalysts?
3
Why does having identical groups on either side of the pi bond lead to no geometrical isomerism?
8
Why do stabilised ylids lead to trans alkenes in the Wittig reaction?
5
Rate of catalytic hydrogenation of alkenes
0
Why are we still using cis/trans system while the E/Z system is better than it?
8
Why does Birch reduction of naphthalene with isoamyl alcohol form tetralin instead of 1,4-dihydrodialin (as formed with C2H5OH)?