Help with derivation on why antibonding orbitals are more antibonding

We then solved the Schrodinger equation using the LCAO method. In this case, we were solving for a hydrogen molecule. We only considered the 1s orbitals of each hydrogen atom. In other words,

But, the problem is this: if $S_{ij}$ can be negative (like he mentioned), then we have no guarantee that the coefficient for the antibonding molecular orbital will be larger than that of the bonding molecular orbital. How do we know that the $S_{ij}$ will always be positive in this case? Also, why does this statement not contradict the statement "$S_{ij}$ is negative for antibonding orbitals." What am I missing?

For the 1s orbital in hydrogen, the wavefunction is

However you can make the assumption, without any loss of generality, that the wavefunctions of both 1s orbitals in dihydrogen ($\ce{H2}$) are of the same phase (i.e. both normalisation constants have the same value of $N$ and $\phi$). As a simple example we can just let $N$ be a positive real number. With this, the wavefunction of the 1s orbitals always have a positive value, and the overlap integral

always has a positive integrand (no imaginary components, so I dropped the complex conjugate). The integral is therefore positive.

As such, by virtue of expressing the MOs in that form, your overlap integral is necessarily positive.

Note that the above discussion only really applies to 1s + 1s overlap. With other orbitals, which have both positive and negative regions, you can end up with a negative overlap integral depending on the relative phases that you choose.

For example in $\ce{BeH2}$ if you consider the middle Be 2p orbital to overlap with both hydrogen 1s orbitals, one "overlap" will be formed with the positive lobe of the 2p orbital and the other "overlap" will be formed with the negative lobe of the 2p orbital. Assuming that you phase both 1s orbitals to be positive, then the first overlap integral will be positive (positive 1s times positive 2p gives a positive integrand) and the second will be negative (positive 1s times negative 2p gives a negative integrand). 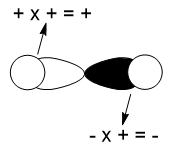 In general your choice of phase is arbitrary; it does not affect the final physical result, and is simply chosen to make the calculations easier. That is to say, the eigenvalues (MO energies) that you get out of it will still be the same. The eigenfunctions may take on a different form, but that is physically unimportant.

9
Normalization of the wavefunction φ(x) = A
5
Probability of measuring a particle in the ground state: having trouble with the integration
6
Why does symmetry have to be maintained in molecular orbitals?
5
How is a molecular orbital a 'quantum superposition' of the atomic orbitals?
4
What is the reason behind neglecting & putting the overlap integrals $0$ in Simple Hückel Theory?
5
What determines the coefficients in the wavefunction of a hybrid orbital?
0
Molecular orbitals in an ionic diatomic compound
3
In the LCAO method for $H_2^+$, why do we only add or subtract orbitals but never alter one of the phases of the orbitals?