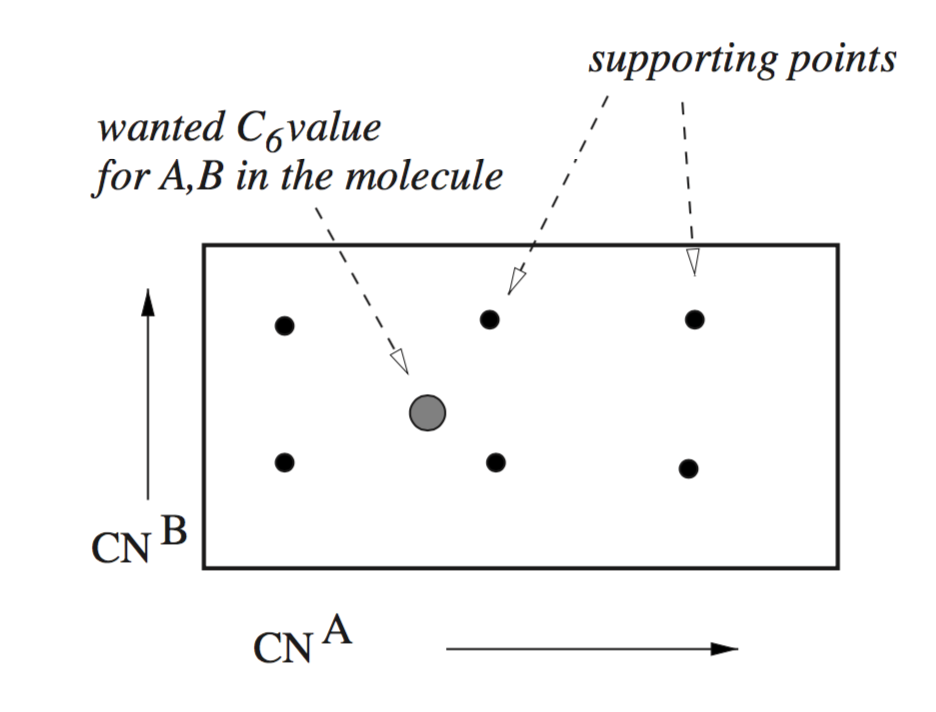 I will quote the paper quite a bit, but I'll try and summarize a bit after the quotes and equations. You might want to start at the bottom and work backward, a lot of this is just for later reference.

So $A$ and $B$ are nuclear indices, and together specify an arbitrary pair.

Although the $C_{6}^{AB}$ values can be compute easily for any pair of free atoms by using Eq. (5) [the Casimir-Polder integral] in principle, this would lead to a rather inconsistent treatment of dispersion in and between molecules.

For reference, here is equation 5:

Instead they calculate the integrals over pairs of hydrides, subtracting the effect of molecular hydrogen (equation 10), in order to capture the effect of being bonded:

At first sight this new approach seems to be a disadvantage because it leads to reference molecule dependent (ambiguous) coefficients. However, as will be discussed in detail below (...), it opens a route to system [coordination number (CN)] dependent "atomic" $C_6$(CN) coefficients. (...) We propose here a radically new "geometric" approach that is based on the concept of a fractional coordination number. (...) We base our ansatz on a fractional CN for an atom $A$, that is a sum of a "counting" function over all atoms in the system,

So the CN$^A$ is some bond distance-dependent scaling factor for the specific atom $A$ under the influence of all other atoms $\{B\}$. Here is how they incorporate their coordination number scaling into the dispersion coefficients. Following emphasis mine:

Turning back to the dispersion coefficients we propose the following general approach. For each element in the Periodic Table, at least one reference molecule is used to compute $\alpha(i\omega)$ values in Eq. (10). (...) If an element is commonly investigated, and/or often found in different chemical environments, we suggest to use several representatives for which values are computed. In the case of carbon for example, ethyne, ethene, and ethane can be used for CNs between 2 and 4. Values computed for $\ce{C-H}$ and the carbon atom complete the set. For the atom of interest in any of the reference systems also the CN is calculated and stored. Using Eq. (10) the $C_{6,\text{ref}}^{AB}$(CN$^A$,CN$^B$) values are computed for this pair with the two atoms in their specific environments. These serve as supporting points in an interpolation procedure to derive the coefficient for any combination of fractional CN values. Because we base our approach on pair-specific coefficients $C_{6}^{AB}$, a two-dimensional (2D) interpolation scheme must be used. After extensive testing we propose a simple Gaussian-distance ($L$) weighted average,

Conceptually, here is how a calculation would work:

So, to answer your question,

This is exactly correct. It is done by interpolation on a grid of reference values, where the coordinates/points on the grid are the coordination numbers, and there is a grid for every possible $AB$ pair.

Not the answer you're looking for? Browse other questions tagged computational-chemistry intermolecular-forces density-functional-theory or ask your own question.