Why is carbon dioxide considered a Lewis acid?

$\ce{CO2}$ is considered a Lewis acid. How it is an acid? According to Lewis: “species that accept an electron pair are acids”. But $\ce{CO2}$ can't accept electron pairs because oxygen and carbon both are electron sufficient (have complete octets). If the reason is within a lone pair of electrons on oxygen then ammonia ($\ce{NH3}$), which also has a lone pair of electrons, should be acidic, too. But ammonia basic in nature.

So why can carbon dioxide be considered a Lewis acid?

If you've learned how to draw resonance structures, they will help you greatly here (and in general). In the attached figure, 1 is the relevant resonance, implying the carbon in $\ce{CO2}$ is partially positive and therefore may be prone to accept electrons (see the resonance hybrid).

In theory, any Lewis base (electron-donor) can react with $\ce{CO2}$ (Lewis base abbreviated B in 2 & 3). We can draw the reaction mechanism using the charged resonance structure (2) or the neutral, most "stable" structure (3). In reality, these are not two discretely different forms but just "snapshots in time" of a true $\ce{CO2}$ molecule, so it doesn't really matter which structure we as humans choose to represent on paper. 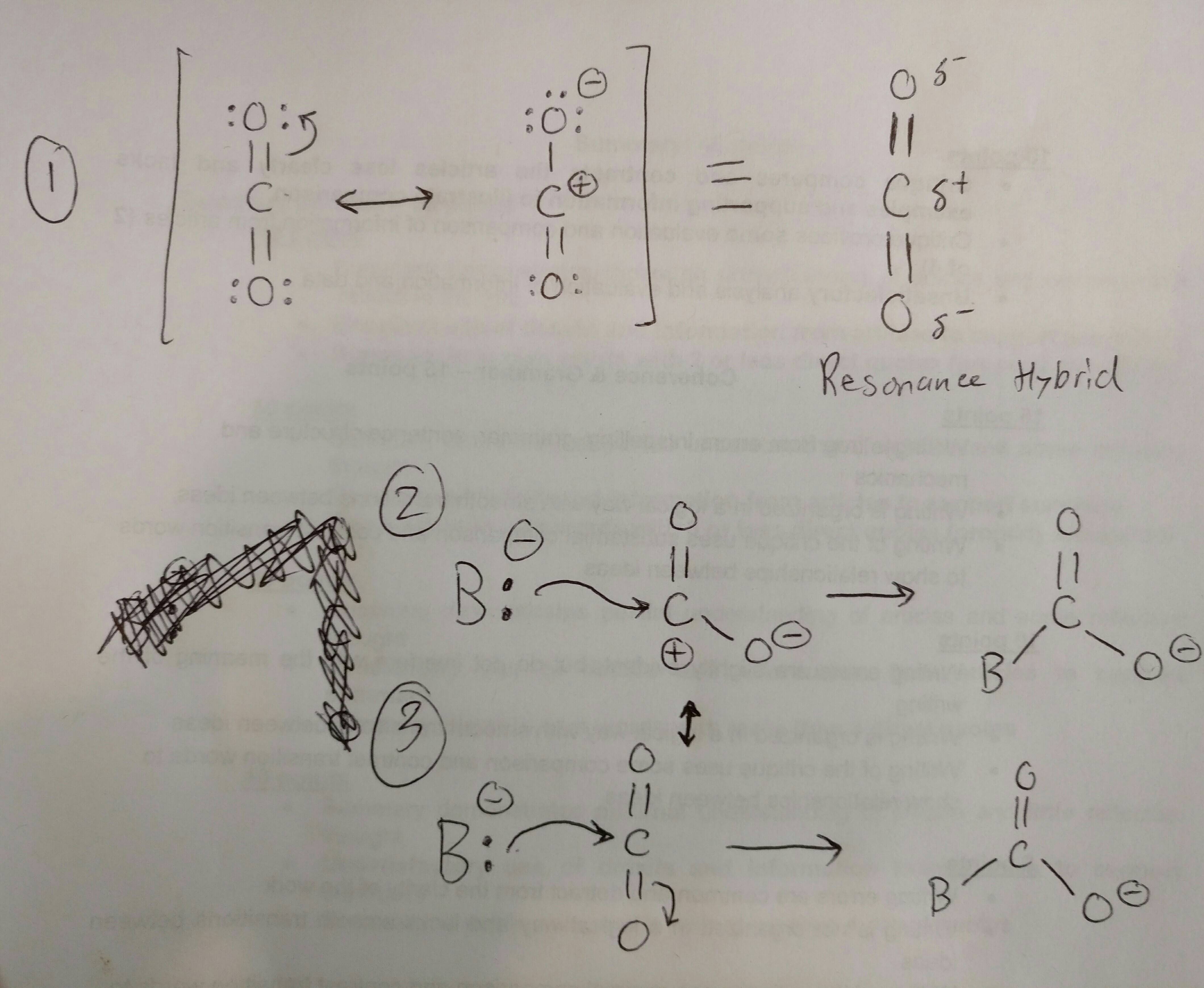 I hope you can see how $\ce{CO2}$ is a Lewis acid because it is able to accept electrons. Although in the principal resonance structure you see all atoms have full octets of electrons, the double bonds can easily break, rearranging the electrons. If full octets prevented atoms from receiving electrons, a great percentage of all known reactions would not occur. The key is that the electrons in the octet must have an alternative place to go if new electrons are donated to the molecule (in this case, the electrons migrate to the $\ce{O}$ atom). In more advanced chemistry, we would say $\ce{O}$ acted as an electron sink in this process.

It is interesting to note that any $\ce{C=O}$ structure can react as a Lewis acid in exactly the way your $\ce{CO2}$ molecule did, and this reaction of the $\ce{C=O}$ group (known as a carbonyl functional group) is among the most important patterns in the biochemical reactions occuring in our bodies.

You cannot adequately understand the Lewis acid theory with respect to main group elements if you only draw simple Lewis structures (which, per definition, should have complete octets on all main group elements) and then attempt to find electron pair acceptors. Well, to be perfectly honest, you might get lucky with boron compounds but the game will end there.

It is relatively clear to most people that metal cations can act as Lewis acids: they are positively charged because they lost at least one electron. They also have relatively low-lying orbitals (e.g. the one that lost an electron) with which the Lewis bases can interact. One has to apply more thought to molecules such as $\ce{CO2}$, though.

To analyse a molecule such as $\ce{CO2}$, you should start by thinking about the polarity of the bonds in question. The periodic table or whichever data page you wish to consult will tell us that oxygen is much more polar than carbon; therefore, the bonds are polarised towards oxygen. This can be exemplified by the partial charge formalism as shown below.

This first depiction already tells us that carbon is somewhat ‘electron-lacking’. While that in itself is not yet a proof of Lewis acidity, it is a strong hint. Diving deeper, one would have to consider the molecular orbitals of $\ce{CO2}$. There are two symmetry-equivalent but perpendicular π systems both populated by four electrons; and both can be seen as an allyl anion type of π system. Since it is wholly symmetric, we can draw the following three resonance structures (for clarification, the allyl anion $\ce{C3H5-}$, has also been included in the scheme).

In this depiction, I have chosen the left-hand double bond to belong to the perpendicular π system and the right-hand double bond to be the interesting one analogous to the allyl anion. Hence, there will always be one more bond on the left half of carbon dioxide than the allyl anion. The negative charge (i.e. lone pair) present on the leftmost allyl anion carbon corresponds to a lone pair of the leftmost oxygen in carbon dioxide; the lone pair is unmarked as per convention.

In these depictions we can observe a resonance structure wherein carbon dioxide’s carbon has a positive charge and thus an electron sextet. If you look at the actual orbitals in question, the two populated bonding orbitals (one may be called nonbonding) have a high oxygen contribution while the antibonding π3 orbital is a primarily carbon-centred one. This orbital is also the lowest unoccupied molecular orbital (LUMO) and thus the one we are interested in when determining Lewis acidity. We find that it is energetically low-lying and easily accessible and therefore Lewis bases (e.g. hydroxide, ammonia) can easily interact with it.

The Lewis acid-base reaction can also be guessed looking at the resonance structures. Because the Lewis base interacts with the antibonding π3 orbital, it will break one of the $\ce{C=O}$ double bonds leading to the following structure:

I have marked the oxygens in blue and cyan (and black) so they may be distinguished from another.

0
Is carbon dioxide more acidic than carbon monoxide?
2
How can I understand the Lewis acid-base interaction of iron(III) and water?
2
Why does CO2 accept electrons?
5
Why does the Lewis definition of acids specify a PAIR of electrons and not a single electron?
2
How to identify lewis acids and bases
0
Lewis Acid / Base reaction for SO2 and H2O